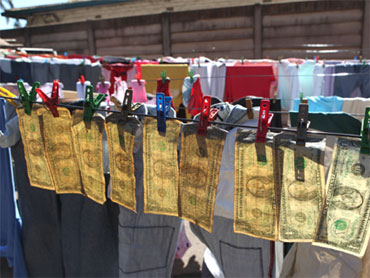 The washing machine cycle takes about 45 minutes - and George Washington comes out much cleaner in the Zimbabwe-style laundering of dirty money.

Low-denomination U.S. bank notes change hands until they fall apart here in Africa, and the bills are routinely carried in underwear and shoes through crime-ridden slums.

Some have become almost too smelly to handle, so Zimbabweans have taken to putting their $1 bills through the spin cycle and hanging them up to dry with clothes pins alongside sheets and items of clothing.

It's the best solution - apart from rubber gloves or disinfectant wipes - in a continent where the U.S. dollar has long been the currency of choice, and where the lifespan of a dollar far exceeds what the U.S. Federal Reserve intends.

The U.S. Federal Reserve destroys about 7,000 tons of worn-out money every year. It says the average $1 bill circulates in the United States for about 20 months - nowhere near its African life span of many years.

Larger denominations coming in through banks and formal import and export trade are less soiled.

But among Africa's poor, the $1, $2, $5 and $10 bills are the most sought after. Dirty $1 bills can remain in circulation at rural markets, bus parks and beer halls almost indefinitely, or at least until they finally disintegrate.

Zimbabweans say the U.S. notes do best with gentle hand-washing in warm water. But at a laundry and dry cleaner in eastern Harare, a machine cycle does little harm either to the cotton-weave type of paper. Locals say chemical "dry cleaning" is not recommended - it fades the color of the famed greenback.

Laundry worker Alex Mupondi said customers asked him to try machine-washing a selection of bills and the result impressed him.

But storekeeper Jackie Dube hasn't yet taken up advice of friends to cleanse the often damp and stinking U.S. dollars she receives for the garments and cheap Chinese consumer goods she sells in Harare. It's time-consuming, she says, adding that stinky, unhygienic bills are a problem.

"I get rid of the worst of the notes as soon as I can in change," she said.
By Associated Press Writer Angus Shaw