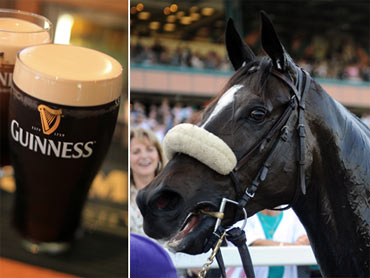 Zenyatta could be getting her favorite beer straight from the tap if she wins the Breeders' Cup Classic on Saturday.

Guinness said Friday it is offering a trip to Ireland and its famed St. James Gate Brewery in Dublin for Zenyatta, trainer John Shirreffs and owners Jerry and Ann Moss if the 6-year-old mare wins at Churchill Downs to close her career with a 20-0 record.

Shirreffs is known to open a bottle of Guinness and pour it into a bowl for Zenyatta in the afternoon. He says she'll only drink the dark Irish stout with its creamy head.

Guinness brand director Patrick Hughes says the brewery will be raising a pint and holding its collective breath during the $5 million race. He reminds all thoroughbreds and the race fans who love them that Guinness is best enjoyed responsibly.

60 Minutes Overtime: Zenyatta
A horse is just a horse. That's what our veteran "60 Minutes" producers thought until they were shown differently by a junior staffer. Go behind the scenes with our very own horse-whisperer to meet the greatest filly in horse racing history.

Extra: Working At The Stable
Extra: Toughest Race of the Year

Zenyatta sent Shirreffs all the right signals on Friday, one day before she tries to make history with a repeat victory in the Breeders' Cup Classic.

"I always look for her to settle in her stall because she's in a new environment, so you'd like to see her get back to being like she would be at home," Shirreffs said. "Comfortable, not really paying attention to what's going on around her. Today was very much like that."

It hasn't been easy to find a familiar routine with Zenyatta's every move closely scrutinized since her arrival from California on Tuesday.

"Today was a great day once again," Shirreffs said. "Back at the barn, we had a lot of people stopping by and taking pictures while she was out grazing. It's a time to appreciate what she's accomplished and what she's meant to so many people around the world. It's a time for me to sit back, relax and enjoy it."

Zenyatta had an easy morning with an uneventful 1@3/4-mile gallop the day before she puts a perfect 19-0 record on the line in the 1@1/4-mile race that concludes Breeders' Cup weekend at Churchill Downs.

TWO SCRATCHES: Rightly So and Crown of Thorns were scratched from the Breeders' Cup on Friday.

Rightly So, the 3-1 morning line favorite for the $1 million Filly & Mare Sprint later in the day, was scratched by the veterinarian.

"The veterinarians came back to the barn and they looked at her again," trainer Tony Dutrow said. "They were not happy with the way she was moving and said they would not allow her to run."

It was a disappointing turn of events for Dutrow.

"I am sure that whatever is wrong with Rightly So, we will get to the bottom of it and take care of it and then go on from there," he said.

Rightly So won her last two races, including the Grade 1 Ballerina Stakes at Saratoga.

Crown of Thorns, the 4-1 second choice for the $1 million Dirt Mile on Saturday, was sidelined by a "flare up of an old injury," according to Hall of Fame trainer Richard Mandella.

He noticed a problem with the horse when he was cooling out after a training gallop Thursday.

"There was some heat in his right front knee," Mandella said. "He's had an issue with that knee for the past few years and it has come back. It's nothing real serious; not a fracture or anything like that. But coming up to a race like this there's just no way you could think about running him given the circumstances."

Now 5 years old, Crown of Thorns has run only eight times. He finished second in his last four races, all Grade 1 stakes. He missed by a nose in last year's Breeders' Cup Sprint.

Mandella believes Crown of Thorns might need surgery before returning.

"It's the kind of thing where I think we can do a procedure on him, give him a little time off and bring him back for next year," he said.

HOLLYWOOD IS CALLING: Hollywood has an eye on Mine That Bird.

Plans are in the works for a movie about the New Mexico-based thoroughbred that won the 2009 Kentucky Derby as a 50-1 long shot.

Among those being considered for roles are Mine That Bird himself and jockey Calvin Borel.

The film will follow the adventures of an undersized horse and his cowboy owners and trainer. The horse is owned by Dr. Leonard Blach and was trained by Chip Woolley during the Triple Crown before being transferred to D. Wayne Lukas.

Mine That Bird, winless in the eight races since his Derby victory, is a 20-1 long shot in the $1 million Dirt Mile on Saturday.