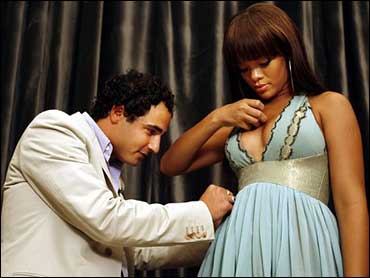 American fashion designer Zac Posen is going into his second decade in business literally re-examining what made him a fashion industry staple in the first place.

Hanging on a rack near a Lurex snakeskin-like sheath and a knit sweater boasting the profiles of Posen's prized pooches at a preview of his pre-fall collection was a seemingly simple black gown. That is, simple until you got a better look.

Posen says what he did for this gown and a few other new pieces, including a trumpet skirt and tweed-and-lace suit, was go back to his archives and recapture some of the excitement he felt as a novice designer while adding the craftsmanship he's learned on the job.

He turned the dress inside-out, and the result was just as he described: a sexy, modern dress with frayed fabric and exposed seams, yet with a mature, sophisticated touch.

It fits nicely with the overall collection, which clearly has roots in other early Posen pieces, too. "Vintage 10 years in the making," he jokes.
When he started out as the toast of the town, design came naturally and viscerally, he explains, but he's seen the fashion industry, as well as his own company, go through many changes that require a more deliberate approach when it comes to business. He's developed a confidence to stick with what he does best and not change directions to follow a trend.

Posen, right there in the pages of The New York Times earlier this year, openly discussed his struggles to keep his business financially viable. He feels he's in a better place now.

Lately, he's turned the tide toward more positive buzz. Reviewers have been complimentary of the pre-fall looks, and actresses Reese Witherspoon and Christina Ricci turned up on red carpets this month in his signature sexy numbers.
He'll show his top-tier fall collection for the second season in a row in Paris in February, and the contemporary collection Z Spoke in New York.

"I feel more in tune creatively now with when I started than I had in year. I've learned you have to trust your work. You have to learn the trick for taking risks without looking like you're taking risks and are too out there," he says.
By SAMANTHA CRITCHELL