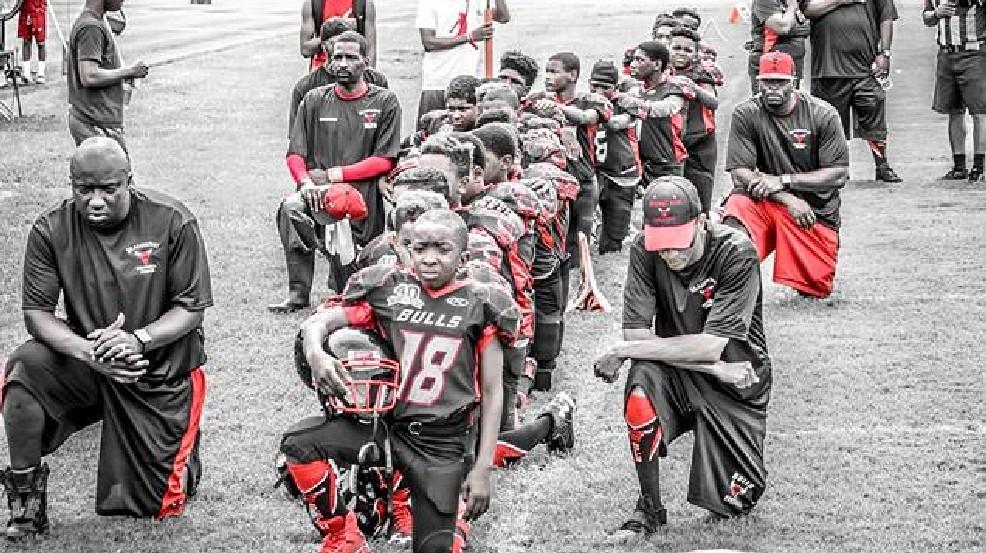 NFL quarterback Colin Kaepernick’s choice to kneel during the national anthem during pregame rituals to protest ongoing injustice against minorities has brought a wide range of reactions, from support to rage. Republican presidential candidate Donald Trump suggested he leave the country.

While the protesters say they are only protesting injustice, detractors say kneeling during the national anthem is disrespectful to the military, the country, and/or police.

Regardless of the controversy it’s created, many athletes have copied Kaepernick’s expression of protest, most especially in football, where even youth teams have taken to kneeling​ during the national anthem to express concerns ranging from bullying to police violence.

At every level, athletes who kneel in protest have reported death threats, from the vague to the specific, like being lynched.

With that protest has come death threats against the kids, ranging in age from 11 to 12.

In a statement to KFDM​, the Beaumont Bulls said: “Their choice to express themselves has now made them a target for hateful comments and threats to their lives as well as those working with the team by those in our community and surrounding areas.”

The Beaumont Enterprise reports​ parents saying some kids have been threatened with lynching.

Similar threats of death by lynching have also been leveled against other athletes.

After three University of Nebraska athletes took a knee during the national anthem before a game last weekend, outrage at all levels was swift. Even Nebraska Governor Pete Ricketts initially called the players’ protest “disgraceful” and “disrespectful,” before eventually agreeing to a meeting with the athletes to discuss their concerns, reports CBS Omaha affiliate KMTV​.

One of the players who kneeled, senior linebacker Michael Rose-Ivey, said he and his teammates received far worse reactions​ than that to their protests, even though he is “not anti-police, anti-military, nor anti-America.”

Rose-Ivey said: “I am still referred to on Facebook and Twitter as a clueless, confused (n-word), by my former high school classmates, friends, peers, and even Husker fans. Some believe Daishon (Neal,) Mohamed (Berry) and myself should be kicked off of the team or suspended. Some say we deserve to be lynched or shot just like the other black people that have died recently. Another believed that since we didn’t want to stand for the anthem that we should be hung before the anthem for the next game. These are actual statements we received from fans.”

Kaepernick has said he has received a wide range of death threats for his protests. He told the San Jose Mercury News​ that he has not alerted team security to the threats, because, “to me, if something like that were to happen, you’ve proved my point and it will be loud and clear for everyone why it happened, and that would move this movement forward at a greater speed than what it is even now. Granted, it’s not how I want it to happen, but that’s the realization of what could happen. I knew there were other things that came along with this when I first stood up and spoke about it. It’s not something I haven’t thought about.”