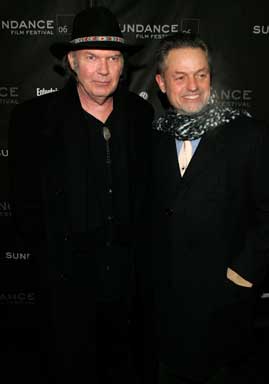 Take some inexplicable, supernatural occurrences, blend in a little paranoia, add a dash of terror and some sexual tension between the lead characters - and you have The X Files.

The tv show debuted in 1993 and has generated a worldwide cult following. The series has become so popular that The X Files debuts Friday, in movie form.

Although the show has taken many twists and turns on TV, actress Gillian Anderson, who plays Special Agent Dana Scully, believes that people who have never seen the show can still enjoy the 20th Century Fox movie.

"It's very important. It was one of the many tasks that Chris Carter (the show's creator) and Frank Spotnitz (co-executive producer) had in writing this script," Anderson told CBS News Correspondent Patty Spitler.

Carter hopes die-hard fans will get a lot out of the film as well, such as answers to questions posed during the TV shows's five-season run - and more on the murky relationship between Scully and her male counterpart, Special Agent Fox Mulder, played by David Duchovny.

Big screen special effects are also in the offing for X-Files movie audiences. But Anderson says that the effects are just the icing on the cake.

"It's interesting, because at the beginning, when the show first started, I think that people just considered it to be a sci-fi special-effects show. After a while, they came around to realize that it was more character-driven than a special-effects show," she says.

How much longer will the TV show The X Files go on? Anderson says she's got a contract for three more seasons.

Creator Chris Carter hopes that after the TV show is over, the characters can reunite every few years in a movie.

In the meantime, Anderson is happy to continue her role as Scully, and expresses sorrow for the day when she stops playing the character.

"I think when we're not doing the series anymore, that I will miss her considerably. But I am not sure how I feel about being in Morocco when I am 60 and have someone refer to me as Scully," Anderson says.

What are the critics saying about the movie?

CBS This Morning Film Critic Gene Siskel said that he had "found a lot of things to like" about the film. As for the TV show, he admitted that he had never seen it.

"Maybe this is the best compliment that I can pay this movie: I am going to start watching. I'm curious about it," Siskel said.