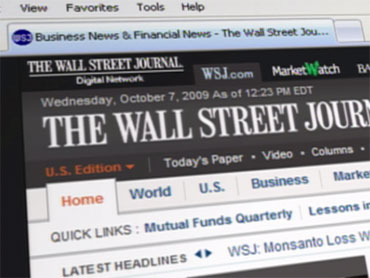 The Wall Street Journal has surpassed USA Today as the top-selling daily newspaper in the United States.

The Audit Bureau of Circulations won't be releasing its latest figures until Oct. 26, but the Journal said Wednesday that it gained about 12,000 subscribers in the April-September period, compared with a year earlier.

That puts its average Monday-Friday circulation at 2.02 million.

USA Today, which has long been No. 1, said last week that it had its worst circulation decline ever, dropping 17 percent to 1.88 million.

Audit rules allow newspapers to count some online-only subscriptions. The Journal, a unit of News Corp.-owned Dow Jones & Co., is among the few major newspapers that charge for access to much of its Web site. USA Today does not.

In an e-mail, USA Today spokesman Ed Cassidy said the newspaper is still the top seller by print circulation.

The Journal did not offer a breakdown of print and online sales for the latest period, but over the past few reporting periods, the Journal said it sold more than 350,000 electronic editions. That supports USA Today's estimates that it has about a quarter of a million more print readers than the Journal.

The Journal has made an aggressive bid to grow beyond its traditional audience on Wall Street. Under Rupert Murdoch, whose News Corp. bought the newspaper in 2007 for more than $5 billion, the Journal has been adding more pages of general interest news and looking to compete with financially ailing regional newspapers.

For the most part, however, the Journal's new status as No. 1 is the result of a steep decline at USA Today. Like most major dailies, the Gannett Co.-owned newspaper is struggling because of the recession and the flight of readers to the Web. But it's also being hit with a slump in travel, slowing traffic at the airports and hotels where it makes many of its single-copy sales.

USA Today, which hiked its price on newsstands last December to $1 from 75 cents, sold about 398,000 fewer copies in the April-September period compared with the year before.