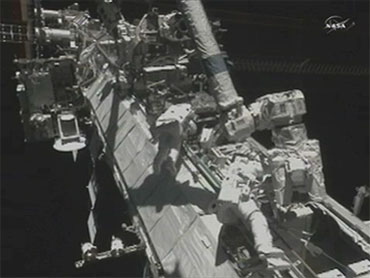 Astronauts completed the first of two spacewalks intended to correct problems with an ammonia pump that forced a powerdown on the International Space Station, But an unexpected ammonia leak delayed the repair work, reports CBS News space consultant Bill Harwood.

After successfully disconnecting a small cooling line and two larger ammonia lines from a faulty coolant system pump on the ISS, spacewalkers Douglas Wheelock and Tracy Caldwell Dyson finally freed a jammed quick-disconnect fitting to release after lightly hammering on the mechanism.

"There's a big round of applause down here," Oscar Koehler radioed from mission control.

"Did you get it Wheels?" Caldwell Dyson asked.

"Yea, got it," Wheelock replied.

But as with the initial, unsuccessful attempt to free the M3 ammonia line, the astronauts reported an obvious, unexpected ammonia leak.

Television views showed a shower of small ammonia ice crystals forming on the QD fitting, and then snapping off and flying away into space.

Wheelock was told to hold off pulling the ammonia line free while flight controllers assessed internal pressures to make sure there would not be a large leak when the line was detached.

After considering their options, flight controllers told Wheelock to reinstall a QD attachment designed to ensure an internal valve is fully closed and seated. He did that and initially reported, "I don't see anything else coming out."

But flight controllers decided to leave the M3 line in place, with an internal valve open, while they considered what might be causing the observed leakage.

Wheelock and Caldwell Dyson were told to head back to the Quest airlock for spacesuit decontamination after installing insulation on the pump module fittings.

The primary goals of today's seven-hour spacewalk were to detach four coolant system lines leading to the pump, along with five electrical cables. After that, the astronauts planned to unbolt the pump module and move it to a nearby storage location. Then, they hoped to retrieve a spare pump and bolt it in place on the S1 truss. Under that scenario, the ammonia lines would be reconnected during a second spacewalk Wednesday.

But the trouble disconnecting M3 threw a wrench into those plans.

The first cooling system line, M4, was removed with no problem and no leakage. The astronauts then turned to M3. After initially getting the latch open, the astronauts reported a small ammonia leak. The latch was closed in a bid to tightly seal the leak, but it refused to budge in subsequent attempts to get it back open.

While flight controllers discussed options, the astronauts turned to M2 and then M1. Both of those fittings disconnected with no problems and no significant ammonia leakage.

"Don't you wish they were all that easy?" Koehler asked.

"Yeah," Wheelock laughed. "I wish M3 would act like its neighbors."

With time running out for today's spacewalk, Koehler told Wheelock to go back to M3 and make one more try to get its quick-disconnect mechanism to release. With a jumper box installed to help maintain the proper pressure in the coolant lines, pressure in the line was slightly lower, raising hopes the QD mechanism would release.

But once again, Wheelock was unable to move the latch. He then was cleared to lightly hammer on a release button in hopes of freeing the jam. The brute force approach worked, and at 12:20 p.m. Wheelock rotated the release latch open. But the unexpected ammonia leak forced flight controllers to leave the line in place while troubleshooting continues.

Because of the ammonia leak, Wheelock and Dyson will have to spend extra time in the Quest airlock, allowing any residual ammonia that might be on their spacesuits to "bake out," before they can re-enter the station. Because of that, flight controllers decided to end today's spacewalk after the astronauts installed insulation on the disconnected lines.

With all four coolant lines disconnected and with the jumper box in place, the coolant loop was in a safe configuration. Removal of the failed pump and installation of its replacement will be deferred to a second spacewalk Wednesday, assuming the ammonia leak in the M3 connector can be resolved.

In an earlier visual inspection of the faulty loop module, Wheelock reported no obvious signs of external damage that might explain what went wrong last Saturday when the pump shorted out. He said all the electrical connections and ammonia quick-disconnect fittings looked solid, with no discoloration or any other signs of trouble.

This is the fourth spacewalk for Wheelock and the first for Caldwell Dyson.

The International Space Station is equipped with two independent coolant loops that circulate ammonia through giant radiators to dissipate the heat generated by the lab's electronics. Both loops are needed for normal operation.

Wheelock and Caldwell Dyson already were gearing up for a planned assembly spacewalk this past Thursday. But with the failure of the loop A coolant pump, NASA managers decided to mount two repair EVAs instead.

This is the 148th spacewalk devoted to space station assembly and maintenance since construction began in 1998 and the 12th so far this year. Total EVA time going into the spacewalk was 921 days and 35 minutes, or 38.4 days.