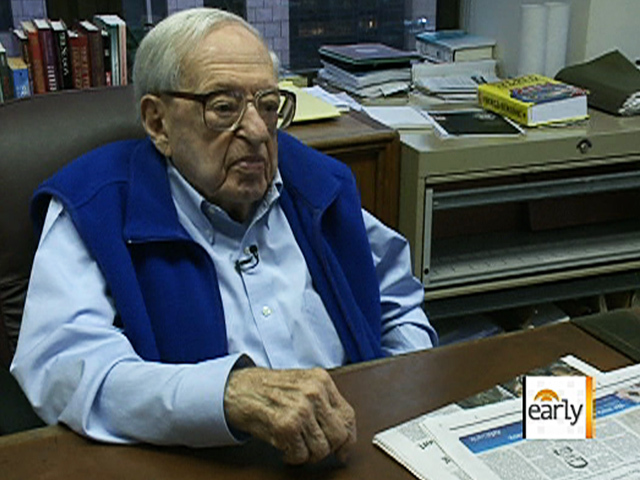 Irving Kahn is the world's oldest stockbroker at age 105. He has tracked the market's highs and lows since 1928 -- a year before The Great Depression.

On the eve of his 106th birthday, Kahn now presides over a Madison Avenue firm, Kahn Brothers Group, Inc., with more than $700 million under management.

So what's Kahn's secret to a long and healthy life?

"Being in a changeable world, which is always interesting," Irving Kahn said. "That's one good aspect of Wall Street, you never know what the next hour will do."

And Irving Kahn isn't part of the firm in name only. He's active in the firm -- sometimes too involved, he told Taryn Winter Brill.

"He gets our trading blotter, a copy of it every day. So he sees every buy and every sell," Thomas Graham Kahn, president of the firm, said.

Irving reports to work every day around 10 a.m. and reads The Economist and The Financial Times -- all under the watchful eye of his son and grandson.

Winter Brill asked Thomas Graham Kahn, "So your dad sat in on a 45-minute meeting on a $10 million deal by himself?"

Kahn's age-defying family came to the attention of Dr. Nir Barzilai at Albert Einstein College of Medicine's Institute for Aging Research. After all, Irving has two sisters and a brother who all made it past 100 years old.

"It's not that we're taking everyone who's 100 years old," Barzilai said. "We're trying to get the best of the best because we want really to understand the biology of those who are best. Those who are likely to maybe get to 110 without diseases."

Barzilai is studying "superagers" -- not just people who live long, but those who live well as they grow old.

Barzilai's study is unique in its focus on 540 centenarians who are all Ashkenazi Jews.

When visiting Barzilai's lab, Winter Brill learned that all of the genetic material of all of the centenarians studied are in one stored in one freezer.

The participants' similar genetic makeup has made it possible for Barzilai's team to isolate a supergene called "CETP." The gene appears to have helped centenarians like Irving Kahn stay healthy longer.

"(Irving Kahn) has a gene that controls the good cholesterol," Barzilai said. "This is the HDL cholesterol. And we found that people who have this mutation in the gene have higher good cholesterol, but also they are protected from heart disease and from cognitive decline and Alzheimer's."

Researchers are currently developing a pill which they hope will mimic the supergene's anti-aging effects that have allowed people like Irving Kahn to drink from the fountain of youth.

So has Irving Kahn sampled some of the new technology of recent years?

When asked if he has an iPod, Kahn said, "No, I don't. It's too damn difficult."

However, he does have a Kindle reader.

But Irving Kahn told Winter Brill he wants fewer words on a page.

"Reduce the number of words on a page," he said. "Shorten them. Don't waste a lot of words when you're talking to people, get the bottom line because the only thing you really have is time and you can't really replace that. Time and tide wait for no man."

Winter Brill said that the Geoffrey Chaucer quote seems only fitting for a man born in 1905, who explored Yellowstone at 14, and rang the opening bell on Wall Street at 100.

After Winter Brill thanked Irving Kahn for spending time with "The Early Show," he responded, "I don't think it's worth it, but I think it will be useful for somebody who's writing a book about longevity."