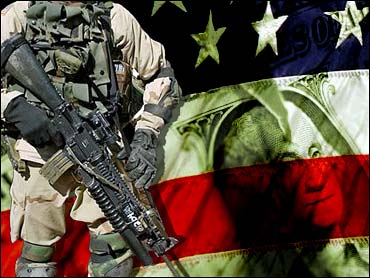 For the first time since the Cold War, global military spending exceeded $1 trillion in 2004, nearly half of it by the United States, a prominent European think tank said Tuesday.

As military operations in Iraq, Afghanistan and the war on terror continue, the world spent $1.035 trillion on defense during the year, corresponding to 2.6 percent of global gross domestic product, the Stockholm International Peace Research Institute said.

The figure "is only 6 percent lower in real terms than it was in (1987-1988), which was the peak," said SIPRI researcher Elisabeth Skons, who co-authored the organization's annual report.

However, the figures may be on the low end, the institute said, as countries are increasingly outsourcing services related to armed conflict, like military training and providing logistics in combat zones, without classifying them as military expenses.

SIPRI, a Swedish government-funded institute, said such outsourcing has more than doubled in the last 15 years, and was estimated to have reached $100 million during 2004, SIPRI researcher Caroline Holmqvist said.

"This is a global phenomenon," Holmqvist said, but added that it's difficult to provide exact figures.

"This is an industry that is not largely regulated," she said, adding that by 2010 global spending on such services are estimated to double current levels.

Besides its regular defense budget, the United States has allocated $238 billion since 2003 to fight terrorism, according to the report. "These appropriations are now assuming extraordinary proportions," Skons said.

The arms trade also grew sharply, with the top 100 makers of weapons increasing their combined sales by 25 percent between 2002 and 2003, the report said. Those companies sold weapons and arms worth $236 billion worldwide in 2003, compared to $188 billion a year earlier. The United States accounted for 63 percent of all arms sales in 2003, the report said.

While continued military operations in the Middle East are responsible for much of military spending, the rest of the world is also spending more money on security, the report said.

"It's hard to put the United States in the center, or blame everything on the U.S.," said Alyson J.K. Bailes, the think tank's director, adding that "despite all the ongoing problems, the state of world security is a great deal better than it was in the Cold War."