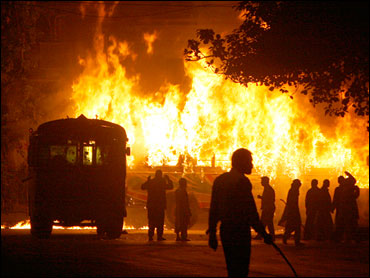 From Moscow to Washington to New Delhi and points in between, dismay and condemnation poured forth Thursday over the assassination of Pakistani opposition leader Benazir Bhutto, along with concern for the stability of the volatile region. World leaders lauded her bravery and commitment to democratic reform.

In India, which has fought three wars against Pakistan, Prime Minister Manmohan Singh said Bhutto is irreplaceable, and noted she had striven to improve relations between the two nuclear-armed countries.

"I was deeply shocked and horrified to hear of the heinous assassination," Singh said. "In her death, the subcontinent has lost an outstanding leader who worked for democracy and reconciliation in her country."

Bhutto's assassination "is not only bad for Pakistan," said former Indian Foreign Minister Natwar Singh. "It is bad for the entire region."

In a letter to Pakistani President Pervez Musharraf, French President Nicolas Sarkozy called the attack an "odious act" and said "terrorism and violence have no place in the democratic debate and the combat of ideas and programs."

Bhutto, a former two-time prime minister of Pakistan, was killed in a suicide attack in Rawalpindi just 10 weeks after she returned to her homeland from eight years in exile. A suicide attack on her homecoming parade killed more than 140 people. The articulate, poised 54-year-old had lashed out at the spread of Islamic extremism as she campaigned for next month's parliamentary elections.

Afghanistan's President Hamid Karzai, who met Bhutto earlier on Thursday in Islamabad, said he was deeply pained by her death. He called her a "brave daughter of the Muslim world" who had "sacrificed her life, for the sake of Pakistan and for the sake of this region."

"I found in her this morning a lot of love and desire for peace in Afghanistan, for prosperity in Afghanistan and ... Pakistan," said Karzai.

The United States had been at the forefront of international efforts to promote reconciliation between Bhutto and Musharraf - who under heavy U.S. pressure resigned as army chief and lifted a state of emergency - hoping it would put Pakistan on the road to democracy.

President George W. Bush demanded that the killers be brought to justice.

"The United States strongly condemns this cowardly act by murderous extremists who are trying to undermine Pakistan's democracy," he said, and expressed his deepest condolences to Bhutto's family, to the families of others slain in the attack, and to all the people of Pakistan.

U.N. Secretary General Ban Ki-moon also called for justice and for "all Pakistanis to work together for peace and national unity."

Pope Benedict XVI was immediately informed of the "terrible news," said the Vatican spokesman, the Rev. Federico Lombardi. "One cannot see signs of peace in this tormented region," Lombardi said.

Sarkozy urged Pakistan to hold its parliamentary elections as scheduled on Jan. 8.

In Britain, where Bhutto had attended Oxford University, Prime Minister Gordon Brown said she "risked everything in her attempt to win democracy in Pakistan and she has been assassinated by cowards who are afraid of democracy."

"The terrorists must not be allowed to kill democracy in Pakistan, and this atrocity strengthens our resolve that the terrorists will not win there, here, or anywhere in the world," Brown said.

Italian Premier Romano Prodi said he was filled with grief and called Bhutto "a woman who chose to fight her battle until the end with a single weapon - the one of dialogue and political debate."

"The difficult path toward peace and democracy in that region must not be stopped, and Bhutto's sacrifice will serve as the strongest example for those who do not surrender to terrorism," Prodi said.

Chilean President Michelle Bachelet, during a speech south of Santiago, paid "sincere tribute to a woman ... who fought her entire life for a better Pakistan."

"The already unstable situation in Pakistan will be further exacerbated by this powerful factor," Safonov said, according to the Interfax news agency.

Sweden's Foreign Minister Carl Bildt called Bhutto's murder "bestial," adding that he feels "a strong worry for the consequences this will have for Pakistan."