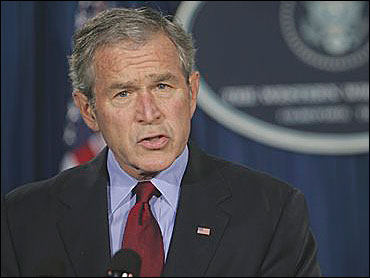 The United States scrambled Thursday with the implications of former Pakistani Prime Minister Benazir Bhutto's assassination after investing significant diplomatic capital in promoting reconciliation between her and President Pervez Musharraf.

President Bush, speaking briefly to reporters at his ranch in Crawford, Texas, demanded that those responsible for the killing be brought to justice.

"The United States strongly condemns this cowardly act by murderous extremists who are trying to undermine Pakistan's democracy," said Mr. Bush, who looked tense and took no questions. He expressed his deepest condolences to Bhutto's family and to the families of others slain in the attack and to all the people of Pakistan.

His appearance came as U.S. officials here struggled to cope with the immense policy implications of the assassination on relations with a nuclear-armed country that has received billions of dollars in American financial assistance and is an ally in the war on terrorism. White House spokesman Scott Stanzel said Mr. Bush planned to speak with Musharraf as soon as it could be arranged Thursday.

"This is a critical moment for Pakistan, for the region, and for the community of nations as we encourage democracy and stability in Pakistan," said Sen. Richard Lugar of Indiana, the top Republican on the Foreign Relations Committee.

Bhutto was mortally wounded Thursday in a suicide attack that also killed at least 20 others at a campaign rally in Rawalpindi. She served twice as Pakistan's prime minister between 1988 and 1996. She had returned to Pakistan from an eight-year exile Oct. 18. Her homecoming parade in Karachi was also targeted by a suicide attacker, killing more than 140 people.

The United States had been at the forefront of foreign powers trying to arrange reconciliation between Bhutto and Musharraf, who under heavy U.S. pressure resigned as army chief and earlier this month lifted a state of emergency, in the hope it would put Pakistan back on the road to democracy.

For the U.S., a destabilized Pakistan is a double threat, reports CBS News correspondent Wyatt Andrews. Street violence could derail the elections and it could make vulnerable Pakistan's nuclear arsenal.

CBS News national security correspondent David Martin reports the Pakistanis are believed to have between 50 and 75 nuclear weapons. The weapons consist of bombs for aircraft and warheads for missiles, but they are stored in a disassembled form as an additional fail-safe.

Bhutto's return to the country after years in exile and the ability of her party to contest free and fair elections had been a cornerstone of Mr. Bush's policy in Pakistan, where U.S. officials had watched Musharraf's growing authoritarianism with increasing unease.

Those concerns were compounded by the rising threat from al Qaeda and Taliban extremists, particularly in Pakistan's largely ungoverned tribal areas bordering Afghanistan despite the fact that Washington had pumped nearly $10 billion in aid into the country since Musharraf became an indispensable counterterrorism ally after Sept. 11, 2001.

Irritated by the situation, Congress last week imposed new restrictions on U.S. assistance to Pakistan, including tying $50 million in military aid to State Department assurances that the country is making "concerted efforts" to prevent terrorists from operating inside its borders.

Under the law, which provides a total of $300 million in aid to Pakistan and was signed by Mr. Bush on Wednesday, Secretary of State Condoleezza Rice also must guarantee Pakistan is implementing democratic reforms, including releasing political prisoners and restoring an independent judiciary. The law also prevents any of the funds from being used for cash transfer assistance to Pakistan, but that stipulation had already been adopted by the administration.

Despite the congressional move, Richard Boucher, the assistant secretary of state for South and Central Asian affairs who had been instrumental in engineering the Bhutto-Musharraf reconciliation, said he had little doubt that the administration would get the money.

In his comments in Crawford, Mr. Bush said, "Mrs. Bhutto served her nation twice as prime minister and she knew that her return to Pakistan earlier this year put her life at risk, yet she refused to allow assassins to dictate the course of her country."

"We stand with the people of Pakistan in their struggle against the forces of terror and extremism. We urge them to honor Benazir Bhutto's memory by continuing with the democratic process for which she so bravely gave her life," he said.

Other U.S. officials and presidential candidates also issued statements expressing shock at Bhutto's assassination. Democratic presidential candidate Joe Biden, chairman of the Senate Foreign Relations Committee, said, "I am convinced Ms. Bhutto would have won free and fair elections next week. The fact that she was by far Pakistan's most popular leader underscores the fact that there is a vast, moderate majority in Pakistan that must have a clear voice in the system."

"This fall," Biden said, "I twice urged President Musharraf to provide better security for Ms. Bhutto and other political leaders." He said "the failure to protect Ms. Bhutto raises a lot of hard questions for the government and security services that must be answered." Biden urged Bhutto's supporters to refrain from lashing out in anger.