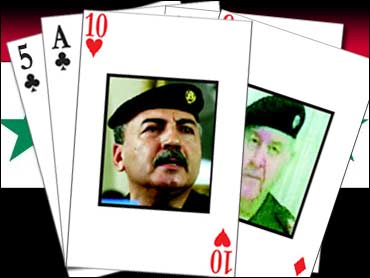 The director of Iraq's office of military industrialization and one of Iraq's two vice presidents under Saddam Hussein have been taken in custody by the U.S.-led military coalition, U.S. Central Command announced Friday.

In a brief statement, Central Command identified the detained men as Abd al Tawab Mullah Huwaysh, director of the Office of Military Industrialization, and Taha Muhie-eldin Marouf, an Iraqi vice president and member of the Revolutionary Command Council.

The statement did not give details of where the men were detained, where they were being held or whether they surrendered or were seized.

Huwaysh was listed as No. 16 and the 10 of hearts on the coalition's list of the 55 most-wanted figures from Saddam's regime and Maruf was No. 42 and the nine of diamonds, CENTCOM spokesman Lt. Herb Josey told CBS News Radio.

"Any time we take regime leaders into custody, it's important, because, obviously, we're trying to remove as many of them as possible," Josey said.

Marouf was the only Kurd in the Baath hierarchy. He was appointed as one of Iraq's two vice presidents in 1975, but the position is seen largely as a gesture to the Kurdish minority and he had little real power.

Born into a prominent family in Kurd-dominated northern Iraq in 1924, Marouf joined the Baath Party in 1968 and has held several ministerial posts. He has also served as ambassador to Italy, Malta and Albania.

The statement came several hours after the U.S. military in Baghdad said that a man said to be a close confidant of Saddam was under arrest Friday after being taken into custody in the Iraqi capital.

The announcement at the U.S. Army's V Corps headquarters said Mizban Khadr Hadi, a member of Saddam's Revolutionary Command Council and a top Baath Party leader, was captured Thursday in the area of Baghdad controlled by the U.S. Army's 3rd Infantry Division.

The announcement also said Muhammad Mahdi al-Salih, the former minister of trade, had been arrested Thursday as well. But the U.S. military in Washington had already reported his arrest on April 23. The U.S. Central Command in Doha, Qatar, could not immediately reconcile the discrepancy and it issued no statement on Hadi's reported arrest.

The three captures bring to 18 the number of top leaders reported to be in custody.

He was among Saddam's most trusted aides who were elevated by the Iraqi leader in March to command the country's four military regions in an attempt by the Iraqi leader to delegate command and strengthen the defense of his country against the American invasion that came later that month.

Hadi was placed in charge of the area that included the Shiite Muslim holy cities of Karbala and Najaf.

In May 2001, Hadi was put in charge of the party's Farmers' Central Office.

Hadi was reportedly extremely close to Saddam and has been one of his advisers, especially on Shiite affairs, since the early 1980s.

He has been a minister without portfolio since June 1982 and before that was governor of Najaf. He was decorated by Saddam for his services during the 1991 Gulf War and the month-long Shiite rebellion that followed Iraq's defeat.

V Corps headquarters, based near Baghdad's airport, had no further details.