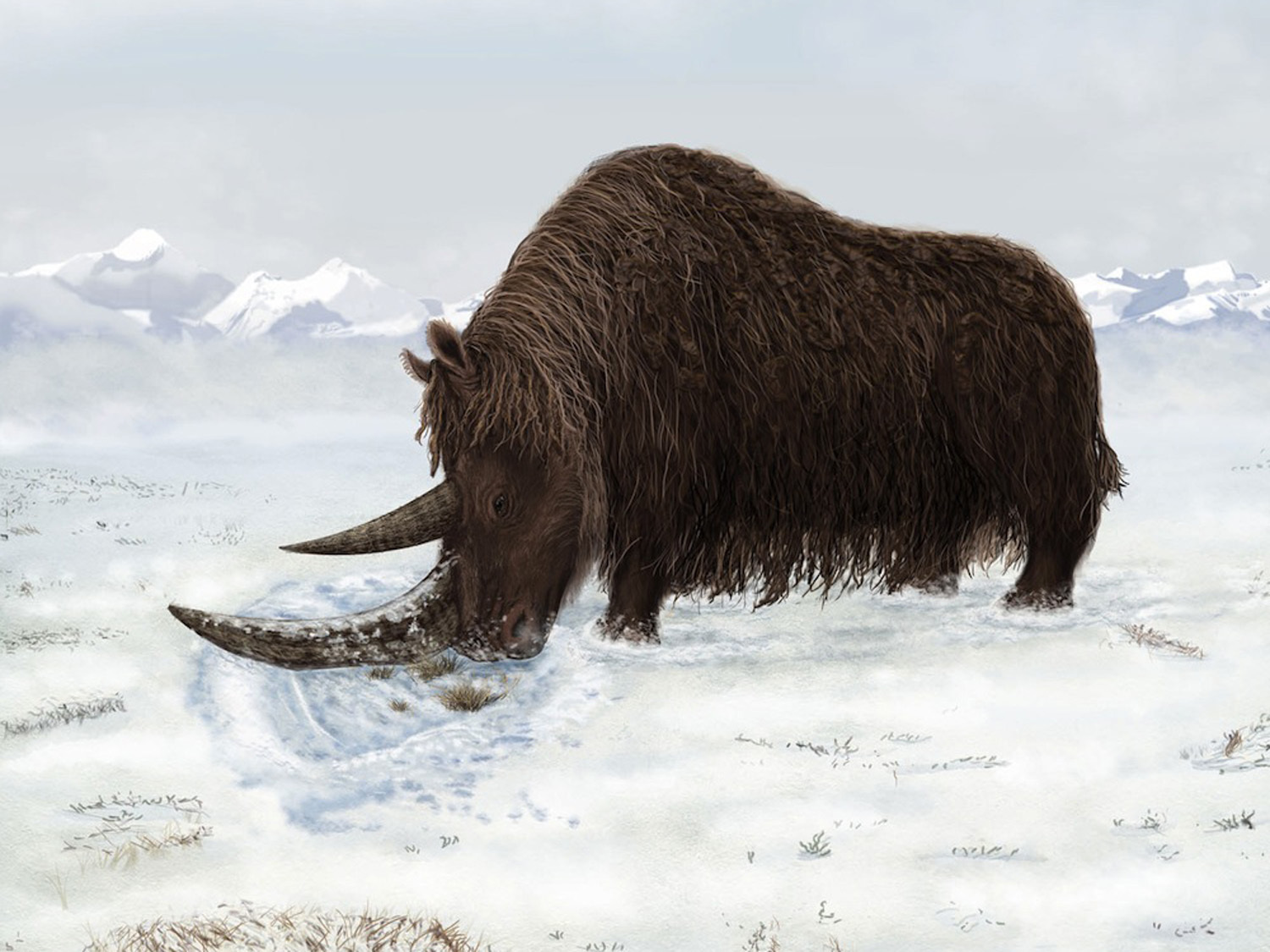 High on the Tibetan Plateau, paleontologists have uncovered the skull of a previously unknown species of ancient rhino, a woolly furred animal that came equipped with a built-in snow shovel on its face.

This curiosity, a flat, paddle-like horn that would have allowed it to brush away snow and find vegetation beneath, suggests the woolly rhinoceros was well-adapted for a cold, icy life in the Himalayas about 1 million years before the Ice Age. Those adaptations may have left the rhino perfectly poised to spread across Asia when global temperatures plummeted, ushering in the Ice Age.

"We think that the Tibetan Plateau may be a cradle for the origins of some of the Ice Age giants," said study author Xiaoming Wang, a curator of vertebrate paleontology at the Natural History Museum of Los Angeles. Such large, furry mammals ruled the world during Earth's cold snap from 2.6 million to about 12,000 years ago. "It just happens to have the right environment to basically let animals acclimate themselves and be ready for the Ice Age cold."

Wang and his colleagues uncovered the complete rhino skull and lower jaw, along with a neck vertebra, in southwestern Tibet. The 3-foot-long (1 meter) skull is 3.7 million years old. It would have belonged to an animal that weighed 1.2 to 1.4 tons (1,090 to 1,270 kilograms), Wang said. That's close to the size of modern rhinoceroses and about 10 percent smaller than the woolly rhinos found a million years later during the Ice Age.

No impressions of hair were found, but based on rhino hairs preserved in permafrost in Siberia, the researchers believe this rhino would have been covered with long hairs much like the fur of a modern yak.

But the most notable feature of the rhino skull was its large front horn, which was flattened to form a paddle.

"The horn is leaning forward; it's tilting forward from the nose," Wang said. "That is in line with the adaptation of snow-sweeping, so the animal does not have to strain its neck as much as it tries to sweep the snow."

The rhino had another feature that would have made it a master of winter weather. The teeth have high crowns, making them more durable and able to handle tough, high-altitude vegetation.

These winter-ready features would have made it a snap for the rhino or its evolutionary descendents to head downhill when the Ice Age came along, Wang said.

There's no fossil record of this particular rhino species during the Ice Age, Wang said, but woolly rhinos were living in present-day Siberia, a much lower elevation than the Tibetan Plateau, during that period. The researchers suspect that many an Ice Age giant had its Himalayan ancestors to thank for the adaptations that made such a spread possible. For example, they report in the Sept. 2 issue of the journal Science, the evolution of the Himalayan blue sheep, or bharal, may have followed a similar path.

"Once the Ice Age came along, it's a matter for them to basically come down from the high plateau and go into the rest of the world," Wang said. "They are already pre-adapted."

Addicted to your smartphone? How to track your screen time