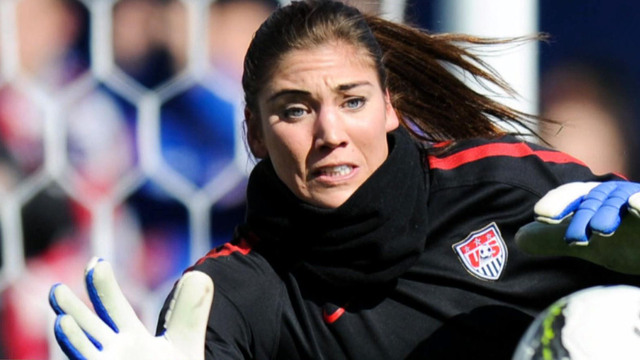 Hope Solo achieved celebrity status after helping guide U.S. Women's Soccer to back-to-back Olympic gold medals. But she has had a history of off-the-field trouble, and this latest misstep was enough to get her temporarily kicked off her team, reports CBS News' Elaine Quijano.

When the U.S. Women's Soccer team takes the field in World Cup warmups next month, they will do so without their star goal keeper.

On Monday Solo's husband, former NFL player Jerramy Stevens, was arrested on suspicion of driving under the influence. Solo was in the car at the time and according to a TMZ report was "acting belligerently" toward police and was nearly arrested herself.

On Wednesday, U.S. Soccer suspended solo for 30 days, saying, "Hope made a poor decision that has resulted in a negative impact on U.S. Soccer and her teammates. We feel at this time it is best for her to step away from the team."

"In a sense it's the straw that broke the camel's back," Soccerwire.com editor Charles Boehm said. "I think there's real concern that she just can't stay out of trouble."

"In this situation she was involved in an incident while she's on U.S national team duty," Boehm added. "So I think she's crossed a line in the eyes of U.S Soccer that she hadn't crossed before."

Stevens was her fiancé back in 2012 when he was arrested on suspicion of domestic violence after the two got into a fight. Charges were never filed and they got married the next day.

And just days ago, a judge dismissed charges that she assaulted her half-sister and 17-year-old nephew last June.

In a statement Solo accepted her suspension, saying, "I think it's best for me to take a break, decompress from the stress of the last several months, and come back mentally and physically ready to contribute to the team."

"Hope Solo is the best goal keeper in the world in women's soccer right now and you can certainly make an argument that she's one of the best women's soccer players in history," Boehm said. "But again, part of what makes her great is also some of the aspects of her personality that have drawn her into trouble."

Solo's suspension will be reviewed following the 30 days -- plenty of time for the Women's World Cup kickoff in June.