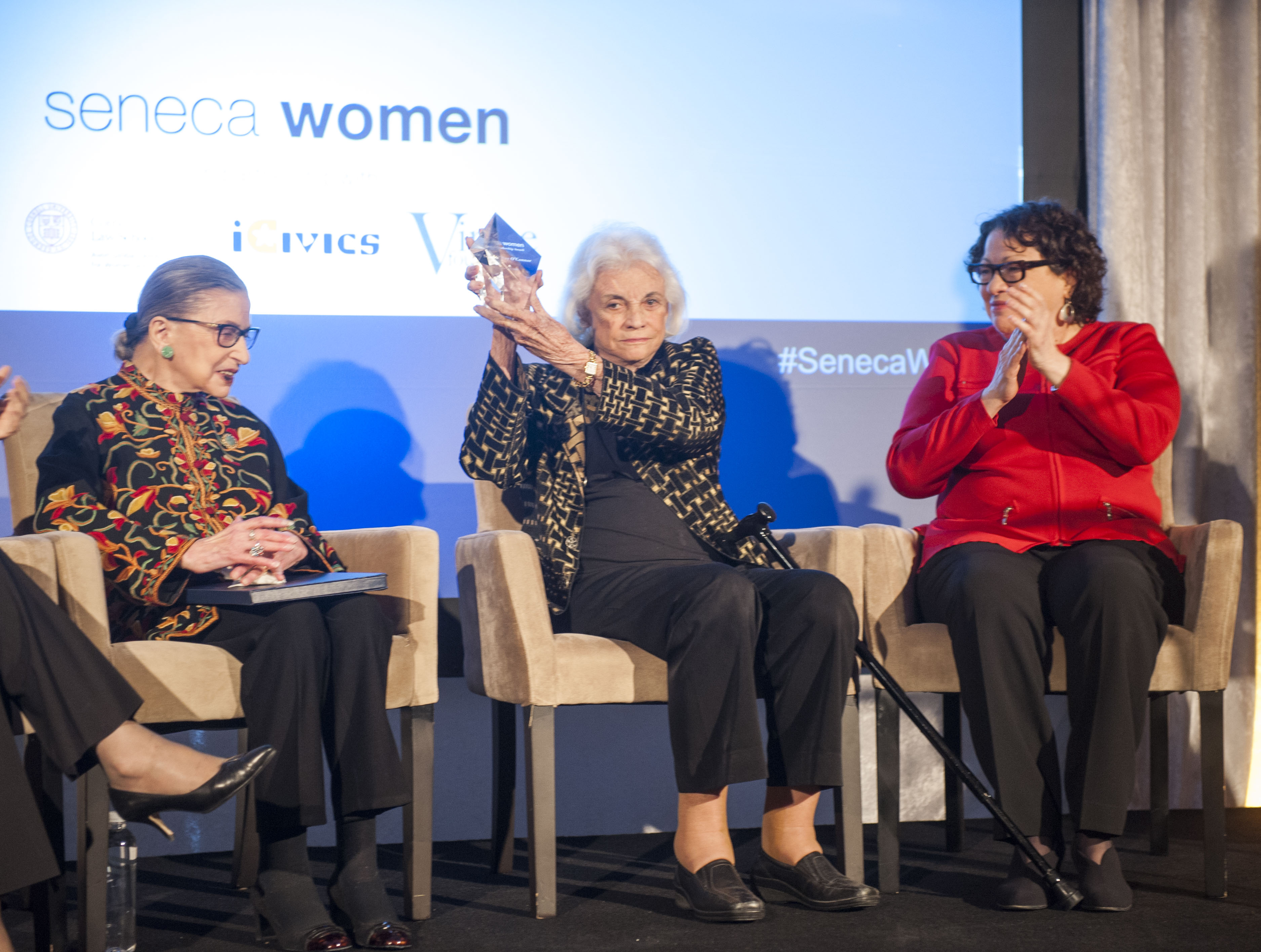 All three female justices on the Supreme Court came together Wednesday to pay tribute to the life and continuing legacy of former Justice Sandra Day O'Connor, the first woman to serve on the high court.

O'Connor, who was appointed in 1981 and retired in 2006, was lauded for her trailblazing success - both during her time on the bench and in her advocacy work since leaving the court to promote civic education for children and justice for women around the world.

The women currently on the court - Justices Ruth Bader Ginsburg, Sonia Sotomayor and Elena Kagan - attended the ceremony at the National Museum of Women in the Arts honoring O'Connor, 85. They briefly shared a stage as the former justice received an award from the Seneca Women Global Leadership Forum, which advances women's interests.

O'Connor spent most of the event in a wheelchair and did not make any public comments. She was shown speaking during a brief video presentation about her legacy, noting that it took 191 years to get a woman on the Supreme Court.

"It was quite a responsibility because if I didn't do the job well, it might be more than 191 years to get the next woman on the court," O'Connor said in the video clip.

Ginsburg spoke at length about her friend and former colleague, recalling the unusual route she took to the court.

"Growing up on the Lazy B Ranch in Arizona, she could brand cattle, drive a tractor and fire a rifle accurately, well before she reached her teens," Ginsburg said.

"When she joined the court in 1981, she brought to the conference table experiences others did not possess - at all or to the same degree," Ginsburg said as the audience erupted in laughter.

She said O'Connor did more to promote collegiality on the court "than any other justice past or present." When O'Connor dissented or wrote a separate opinion from the majority, Ginsburg said she stated her disagreement "directly and professionally."

"She avoided castigating colleagues for an opinion that was Orwellian, profoundly misguided, not to be taken seriously or a jurisprudential disaster - and I'm making none of those up," Ginsburg said, recalling insults presumably uttered by another justice.

Ginsburg recounted one incident from her own early days on the high court. As Ginsburg read a summary of the court's majority opinion from the bench, O'Connor slipped an attendant a note for the new justice that read: "This is your first opinion for the court. It is a fine one. I look forward to many more."

"Remembering how good that note made me feel, I sent similar notes to Justice Sotomayor and Justice Kagan when they announced their first opinions for the court," Ginsburg said.

O'Connor in 2008 helped start the Avon Global Center for Women and Justice at Cornell Law School. The group that works around the world to eliminate violence against women and girls by improving access to justice.

In 2009, she founded iCivics, a nonprofit organization that creates educational games to teach children about how government works. It has since expanded to reach 50 percent of all middle schools and more than 7 million children.