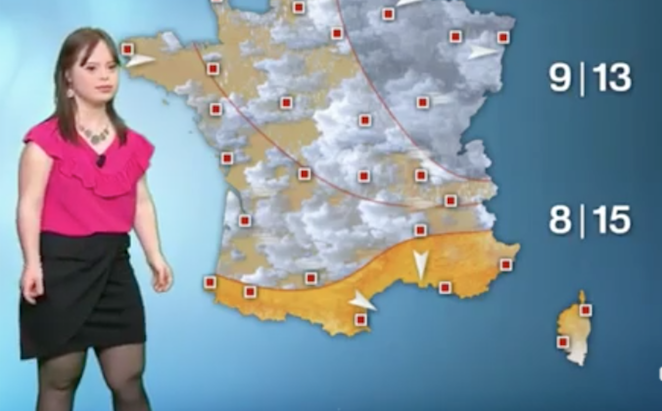 A young woman with Down syndrome fulfilled her lifelong dream this week when she stepped in front of a green screen to read the weather forecast on national television for the first time.

Melanie Segard, a 21-year-old Frenchwoman, was all smiles when she appeared on the national public channel France 2 Tuesday night.

The TV station invited Segard to host after her Facebook campaign, called #MelaniePeutLeFaire — or “Melanie can do it” — went viral weeks prior. With help from the organization Unapei, a non-profit that helps create a more inclusive and supportive society for people with disabilities, Segard asked followers to support her dream of presenting the weather on live TV.

Within hours after posting her request on February 26, her page went viral with more than 100,000 likes.

Over the past few weeks, Segard’s page has grown to nearly 250,000 followers, and she proudly announced last week that she would be France’s first-ever weather presenter with Down syndrome.

“I’m different, but I want to show everyone I can do a lot of things,” she wrote on her Facebook page.

On Tuesday, Segard did just that.

“This is it. I did it. I’m finally a weather girl,” Segard said after making her debut on France 2.

“She did it! Melanie fulfilled her dream by presenting the weather,” France 2 posted on its Facebook page Tuesday, along with a video that has been viewed 4.2 million times in less than 24 hours.

For four days, Segard shadowed France 2 meteorologist Anaïs Baydemir and underwent training from staff to prepare for her presentation and learn how to work with the graphics that pop up on the screen during the live broadcast.

Accompanied by her 27-year-old brother Cyril on Tuesday, she was ready. Segard stood beside Baydemir on the set and confidently delivered the weather forecast, pointing to the screen and ending with an enthusiastic handshake.

“You have proven that the company is ready to welcome all differences,” the group Unapei wrote on Facebook, while celebrating her weather segment at a viewing party. “It’s a good reminder that people with intellectual disabilities are just as capable of any other person!”