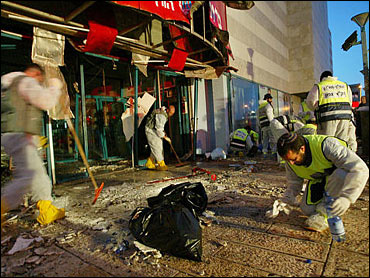 A Palestinian woman blew herself up during a security check outside a mall in northern Israel on Monday, killing three Israelis and wounding dozens in the fifth suicide bombing in 48 hours — a violent challenge to a U.S.-backed Mideast peace initiative and the new Palestinian prime minister.

The bombings in Israel, as well as multiple suicide attacks in Saudi Arabia and Morocco in the past week, have raised questions about U.S. President George W. Bush's ability to stem global terrorism in the aftermath of the Iraq war.

Monday's blast in the working-class town of Afula near the West Bank was claimed by a militia linked to the ruling Fatah group, proving particularly embarrassing to the Palestinian prime minister, Mahmoud Abbas, a Fatah leader, who has denounced violence and promised to rein in the militants.

Israel blamed Yasser Arafat for one of the steepest spikes in violence in nearly three years of fighting, saying he continues to encourage terror, even if he is not directly involved in planning attacks. Arafat angrily denied the accusations, claiming Palestinian security agents have succeeded in foiling several attacks.

Israeli Prime Minister Ariel Sharon resisted renewed pressure from his Cabinet to expel Arafat, apparently because of U.S. opposition to a step that could derail the "road map" plan and send the situation spinning further out of control.

After the Iraq war, with Mr. Bush promising to turn his attention to the Israeli-Palestinian conflict, there had been hope of a breakthrough in ending 32 months of fighting. However, Palestinian militants have often stepped up attacks at critical times in peacemaking, to prevent progress. Sharon, in turn, has given veto powers to the militants by insisting that violence must stop before negotiations can begin.

Mr. Bush said Monday that he was determined to push ahead with the peace plan, a prescription for ending violence and setting up a Palestinian state by 2005. "We're still on the road to peace," the president said. "It's just going to be a bumpy road. But I'm not going to get off the road until we achieve the vision."

Monday's blast in Afula went off at 5:14 p.m. at a back entrance to the Shaarei Amakim mall where shoppers were waiting in line for a security check.

The attacker, identified as Hiba Daraghmeh, 19, from the West Bank village of Tubas, detonated the explosives as she stepped up to security guards, witnesses said.

"There was a big explosion and my friend and I were blown over backwards," said Etti Pitilon, 19, a border policewoman. "I saw bodies, but I don't want to think about it," she added, crying.

Two guards, a man and a woman, were among the three people killed. Forty-seven people were wounded, including several who were in serious condition.

The Al Aqsa Martyrs' Brigade, a militia linked to Fatah, and the Islamic Jihad group both claimed responsibility for the bombings. The two militias have carried out joint attacks in the past, with funding coming from Iran via Islamic Jihad.

The bomber was an English literature student, described as very devout by her father, Azem. Hiba wore a veil, in addition to the traditional headscarf. She left home Monday afternoon, telling her family she was going to class, her father said.

The latest string of attacks began Saturday evening, just before a Sharon-Abbas meeting, the first Israeli-Palestinian summit since the outbreak of fighting.

Hamas bombers struck in the West Bank city of Hebron on Saturday, twice in Jerusalem on Sunday, and in the Gaza Strip on Monday morning, killing a total of nine Israelis and wounding 23. Three of the bombers were from Hebron.

The attacks come at a time when Abbas and Sharon are in a deadlock over who should make the first move on the new peace plan.

Abbas told Sharon during the summit that the Palestinian security forces could only move against the militias once Israel has accepted the new peace plan. Sharon said he first wants to discuss his objections with Bush. He was to have done so this week, but canceled his Washington trip because of the bombings.

Abbas condemned the Afula bombing, and said the violence helped ease pressure on Sharon to accept the peace plan.

The limbo has left the field open to the militants.

CBS News reports another Hamas spokesman said the group would not stop the terror as long as what it calls the "occupation" remains.

"I think this is a good indicator of what the resistance movement is able to achieve at all means, at any time, everywhere," Mahmmoud al-Zhar, a Hamas spokesman, said.

Israel's vice premier, Ehud Olmert, said the Abbas government is weak and will have trouble confronting the militias. He accused the European Union of undermining Abbas by refusing to join Israel and the United States in a boycott of Arafat.

"Some of the European governments are settling accounts with the United States, as if the Abu Mazen (Abbas) government is a creation of U.S. action," Olmert told Israel TV.

Trying to deepen Arafat's isolation, Israel decided Sunday to boycott foreign envoys who meet with the Palestinian leader. Arafat has been confined to his compound in the West Bank town of Ramallah for more than a year by Israel.

Responding to the Israeli allegations, Arafat told The Associated Press, in halting English, that he opposes violence. "You know that we are from the beginning against these activities, and we are condemning it from the beginning," he said.

The wave of suicide bombings washing across the Middle East, from Morocco to Saudi Arabia, has raised questions about the Bush administration's ability to combat global terrorism.

Sixty-two people were killed in the attacks in Casablanca and Riyadh, and authorities were investigating possible connections to the al Qaeda network.

A Sharon adviser, Raanan Gissin, tied the bombings in Israel to attacks elsewhere, saying they were "a late reaction to the victory of the United States in Iraq." The Palestinian attacks were also aimed at deposing Abbas, Gissin said.

However, Palestinian militants have distanced themselves from conflicts elsewhere, saying their struggle was against Israel, not against the United States.