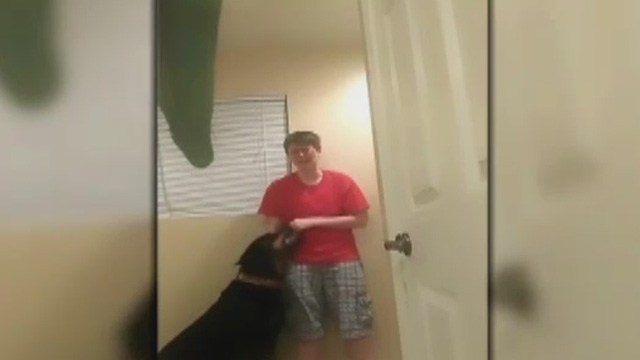 MESA, Ariz. -- A woman shot and killed by Phoenix-area police after they say she charged them with a knife had posted a popular online video last year in which her dog tries to comfort her as she cries and hits herself.

Several officers went to Danielle Jacobs' home Thursday in response to calls about a suicidal person, according to police in the Phoenix suburb of Mesa. Two officers shot the 24-year-old because they felt threatened when she lunged toward them with a knife inside the home, authorities said.

Her 2015 video showed Jacobs sobbing and striking herself while her dog tried to calm her down by approaching her and raising its paws. Her description of the video said it showed what it's like to have Asperger's syndrome, which she says she was diagnosed with in 2013. People with the autism spectrum disorder can be highly intelligent and have narrow, sometimes obsessive, interests, but often lack social skills.

"She was trying to share the struggles some people with Asperger's go through and to try to take the stigma away," said Heather Allen, the founder of HALO Animal Rescue, a Phoenix-area organization where Jacobs had volunteered.

"I also think she wanted to show what a dog can do to help people with a condition like hers," Allen added.

In a post along with the video, Jacobs said she shared the raw moment to show what it is like to live with Asperger's and raise awareness about the disorder, reports CBS affiliate KPHO. The dog's ability to help calm her drew widespread interest and the video went viral. The station reported on the video in 2015.

KPHO reported that Jacobs adopted the animal after she spent time volunteering to care for him through HALO.

Allen said she called police Thursday to ask that they check on Jacobs after the 24-year-old sent Allen a suicidal email that morning asking that someone care for the dog, Sampson.

Allen questioned whether it was necessary to shoot Jacobs.

"I wasn't there, so I don't know how she was behaving," Allen said. "I wish they had been able to use non-lethal restraint, if they could have used a Taser or a beanbag gun.

"She didn't have a gun. She had a knife," Allen said. "It just seems to me there could have been a better way."

The officers shot Jacobs because they felt threatened, said Detective Esteban Flores, a police spokesman. She "came at both officers with a knife and they fired their duty weapons," he said Thursday.

Flores and another Mesa police spokesman did not immediately respond to multiple requests for additional comment Friday, but the department scheduled an afternoon news conference on Jacobs' death and police interactions "with those with mental illness."

Sampson is now with Jacobs' family, reports the station. Her mother said the dog is "the last piece of Danielle they have."