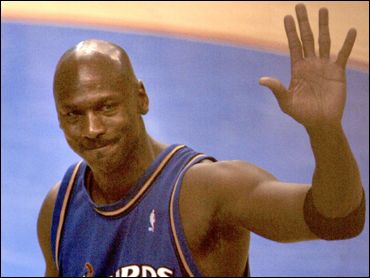 Michael Jordan isn't welcome back with the Washington Wizards, who abruptly dumped him Wednesday because he failed to turn them around in his 3½ seasons on and off the court.

Team owner Abe Pollin made the decision after meeting with Jordan, who was the Wizards' president before coming out of retirement to play for them the past two years.

"I firmly believe that Michael's time with us as a player will have a lasting impact on every player on our roster, and there is no question that our fans were treated to a very unique two seasons as the greatest player in the world completed his career here in Washington," Pollin said in a statement.

No statement was issued by Jordan, who led the Chicago Bulls to six NBA titles in the 1990s but never came close to duplicating that success in Washington. But he planned to resume his front-office job with the Wizards now that his playing days are over.

A Wizards source, speaking on condition of anonymity, told The Associated Press that Pollin's decision was based on three reasons: player dissension, a franchise faltering after the years of Jordan in charge, and deteriorating relationships throughout the organization.

The source said no decision has been made yet regarding the front-office people Jordan hired, or whether Jordan's hand-picked coach, Doug Collins, will remain for the final two years of his contract.

Jordan put the Wizards on the map when he was hired in January 2000, but his management moves failed to turn the moribund franchise around. The team is 110-179 since he became the top decision-maker, a role he kept even after returning as a player.

The last few months have been particularly embarrassing for Pollin's team.

Jordan and his teammates were sniping at each other as the Wizards finished a disappointing 37-45 for the second consecutive year and missed the playoffs again. Players publicly criticized Collins, and Collins accused them of being disrespectful. Recent reports in the "New York Times" and "Washington Post" talked of a rift within the franchise between Pollin's people and Jordan's people.

A source told The Associated Press this week that Jordan had talked to Robert Johnson, new owner of the Charlotte NBA franchise, about a possible role with that team.

But Jordan stumbled from the start. He botched the firing of coach Gar Heard and later hired Leonard Hamilton, who in one season produced a 19-63 record. Jordan tried to run the team from his home in Chicago - the only commuting front-office head in the NBA - leaving a rudderless team to falter on its own.

Jordan did manage to clear most of the Wizards' salary cap mess before he made his biggest personnel move: coming back as a player for two seasons.

This past season, he loaded the roster with Jerry Stackhouse, Bryon Russell, Larry Hughes and Charles Oakley in an effort to get to the playoffs one last time, but the chemistry was bad from the start. Playing alongside the person who is also in charge proved too awkward for many of the players.

Pollin, a 79-year-old owner looking for one more title, must now start from scratch again. General manager Wes Unseld - who held the title in name only while Jordan was around - is taking a leave of absence next month for health reasons, so this summer probably will see a full front-office overhaul.