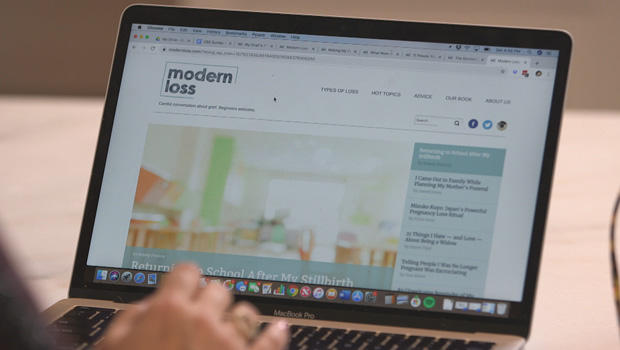 Leslie Gray Streeter said the wedding pictures tell the tale of her picture-perfect marriage to husband Scott, whom she says "was hilarious and funny. I met him when I was 14. We were in high school together in Baltimore."

They went their separate ways, but as if by fate, 20 years later, both moved to West Palm Beach, Florida. They reconnected.

And then they really reconnected.

"We throw around the words, 'Love of your life.'  Does that fit?" asked correspondent Susan Spencer.

They married. But tragically, only five years later, at age 44, Scott died of a heart attack. Leslie's grief was all-consuming. "We had so many plans, just so many things he did not get to do. And it wasn't fair. It's not fair."

At the Columbia University School of Social Work, psychiatry professor, Dr. Katherine Shear studies grief, that shattering emotion that eventually touches us all.

Approximately 2.5 million Americans die each year. "And if you figure each one of them has two or three people who may grieve their loss, that's a lot of people going around suffering from symptoms of grief," said Spencer.

And how long should people expect to grieve? "I have an easy answer to that: For a lifetime," she replied.

And, she says, she sees it among military families who have lost service members in combat.

What happens if it is not dealt with? "It really kind of ruins a person's life," Dr. Shear said. "It makes it very difficult to engage in anything meaningful and connect with other people."

Dr. Shear works with therapists on creative ways to help people overcome complicated grief. As to why grief itself is, for all of us, so hard to face, she said, "We all have death anxiety. That's very natural."

Spencer said, "We don't want to be reminded this is where we're all ending up?"

Which may explain why, according to a new CBS News poll, half of all Americans admits to not knowing what to say to someone who's grieving.

Rebecca Soffer was a rising young producer for Stephen Colbert in 2006 when her mother was killed in a car crash.  At 30, she said, she felt like an orphaned child.

"The reason that a lot of people weren't asking me to really share how I was feeling with them was because they didn't want to know the answer. They were uncomfortable around the topic of loss," she said.

"I just kind of went into this, almost like this mental silence because everything was so overwhelming to me."

Spencer asked, "You were close to her?"

Soffer replied, "She was my best friend. She was everybody's cheerleader.  She was the best of human beings."

Along with shock and grief, she found herself adrift in a culture of platitudes: "I often felt that the onus was on me to make everybody around me feel a lot more comfortable talking about my dead Mom, than the onus being on them to make me feel comfortable sharing my feelings."

Then, there were the well-meaning gifts, like the Edible Arrangements. "I got 14 of them the week after my mom's death," she laughed.

Spencer asked, "Did you get any cards that actually helped?"

According to that same CBS News poll, four out of 10 Americans think sending a sympathy card is the best thing to do.

Outside Cleveland, Ohio, Greg Vovos writes sympathy cards for American Greetings, one of the leaders in an industry that sells 100 million sympathy cards a year.

Spencer asked Vovos, "Do you feel like people who buy your cards are, in essence, depending on you to kind of avoid the agony in figuring out what it is they're supposed to say?"

"What would you absolutely avoid? Are there things that you see in sympathy cards that make you cringe?"

"I would avoid saying, 'You're gonna get over this.' 'Time will heal these wounds.' 'I've been there.'"

The challenge, he says, is to be true, but not trite. "You're writing a card for a moment that is the most personal time in someone's life," he said.

"There are no words ... But there are heartfelt wishes and healing thoughts."

Writing about grief is something Rebecca Soffer also understands. Four years after her mother died, her father died, too. In 2013 she and close friend Gabi Birkner co-founded Modern Loss. She sees it not just a website, but as a movement built on shared, personal stories of grief from around the world, sometimes with an unexpected twist, such as, "What Mom Would Have Thought of the Kardashian Clan."  ["The real reason I wish she was still here is to discuss reality TV with me."]

With titles like "My Grief is F*****g Funny" and "The Surviving Spouse's Guide to a Hallmark Holiday," it's not exactly Grandma's take on grieving.

Spencer said, "It sounds like you're just basically trying to blow up all stigma that's attached to grief."

Which brings us back to Leslie Gray Streeter, a writer herself for the Palm Beach Post.  She discovered Modern Loss while trying to cope with Scott's death.

"You read it and you go, 'Someone else feels like me. Someone else has to get up in the morning and put on earrings and, like, find their keys and figure out what to eat for breakfast and still have this elephant stepping on their chest, this grief and this pain," she said.

As if to show that there are no rules for that, Streeter submitted her own essay to Modern Loss, "What I Did with My Husband's Life Insurance Money."

What she did was buy a sparkling new stone for her engagement ring. She'd lost the original while Scott was still alive. "It made me feel like he was still here," she said.

"He'll always be a part of you, right?' Spencer asked.

Rebecca Soffer's mission today is to spread that word: dealing with death is simply part of living life.

BOOK EXCERPT: "Black Widow" by Leslie Gray Streeter
The Palm Beach Post columnist recounts the terrible night when her life was turned upside-down, and her unplanned, forced accommodation to the newly-dominant emotion of grief.