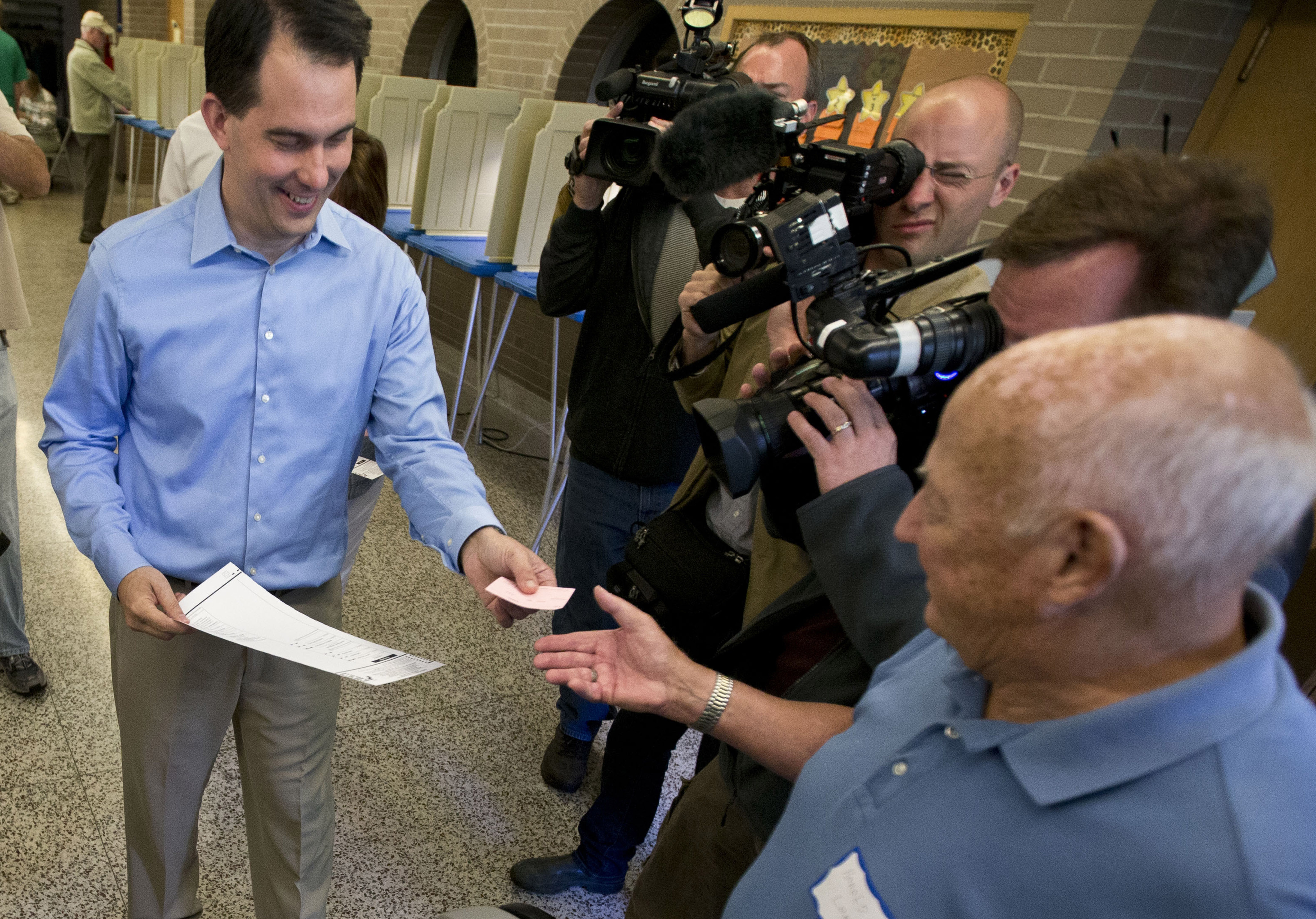 (CBS News) What some are calling the second biggest contest of the 2012 election cycle - behind only the presidential race - is taking place in Wisconsin today.

On the surface, the election is about whether Badger State residents will recall their lightning rod of a governor, Republican Scott Walker, largely for having stripped Wisconsin public workers of their collective bargaining rights.

But on a national level, the recall effort has become a proxy fight over whether Republicans can push through spending cuts and confront organized labor - and live to tell about it. And the outcome will have major implications not just for the GOP but for the labor movement, the Obama campaign and the outside groups poised to play a major role in the November elections.

To understand just how large this battle has become, consider this: According to the Center for Public Integrity, candidates and outside groups have spent $63.5 million on the recall election - an enormous figure that easily breaks the previous record of $37.4 million (set in the 2010 gubernatorial contest) for spending in a Wisconsin election.

CBS News correspondent Dean Reynolds reported on "CBS This Morning" Tuesday that Wisconsin voters are "energized and polarized." To see his report, click on the video below:

Walker, who is 44, is dominating his Democratic rival, 58-year-old Milwaukee Mayor Tom Barrett, in the money race thanks in large part to donors from outside the state. As of campaign filings released on May 29, Walker had raised $30.5 million, with about two-thirds of that total coming from donors outside Wisconsin. Barrett had raised $4 million, with about one-fourth coming from outside the state. Part of the disparity can be explained by the fact that Walker, as a sitting governor facing recall, is not subject to the state's legal limits on campaign contributions under Wisconsin law. Barrett, by contrast, was legally barred from accepting contributions in excess of $10,000 per person.

The rest of the spending in the race has been from outside groups, and it has disproportionately benefited Walker. The Tea Party-linked group Americans for Prosperity alone told CBS News it has spent $10 million on the race since January 2011 on what it says is education over the positive impact of Walker's budget reform efforts. Union groups have spent at least $2 million to defeat Walker, according to CPI.

Barrett only entered the race in late March, but the effort to recall Walker effectively began last February. That's when the newly-elected governor, who had defeated Barrett in the 2010 election, released a budget plan that proposed elimination of most public employee bargaining rights.

Walker had suggested during his 2010 campaign that he would close the state's $3.6 billion budget shortfall in part through cuts to public employee pensions, but he said nothing about eliminating collective bargaining rights. His announcement in February galvanized many on the left, who began chanting "Recall Walker" at the Wisconsin statehouse as part of massive protests against the plan. Wisconsin Senate Democrats even temporarily fled the state in an ultimately futile effort to keep Walker's plan from being passed. In January, Walker's opponents submittedmore than 900,000 valid signatures to the state to trigger the recall election, far more than the 540,208 needed to do so. Barrett won the Democratic primary last month, beating organized labor's preferred candidate.

Heavy hitters from both parties say the outcome of the race will have national repercussions. On Friday, former President Bill Clinton said that if people don't show up to vote for Barrett, Republicans will conclude, "we've got them now."

Mr. Clinton suggested that Republicans will take the following message from a Walker victory: "We're finally going to break every union in America. We're going to break every government in America. We're going to stop worrying about the middle class. We don't give a rip whether poor people will get to work their way into it. We've got our way now. We've got it all. Divide and conquer works."

Republicans, meanwhile, say that Walker's survival would validate their push to make difficult spending cuts to reign in a dangerous deficit.

"In order to make sure that our country doesn't go bankrupt it is very important for Scott Walker to win this election," Virginia Attorney General and gubernatorial candidate Ken Cuccinelli told NPR, "not just for Wisconsin, but for America." Among those who have campaigned on behalf of Walker are Louisiana Gov. Bobby Jindal, Virginia Gov. Bob McDonnell and South Carolina Gov. Nikki Haley.

Conspicuously absent from the discussion has been President Obama, who has endorsed Barrett (and last night Tweeted his support) but otherwise steered clear of the race. Mr. Obama has not visited the state, in part to avoid being tied explicitly to a potential Barrett loss. They also worried the nasty fight could turn off independents in a state that Mr. Obama won easily four years ago but which his campaign now considers a tossup, according to an electoral vote map revealed Monday by Obama campaign manager Jim Messina. (Wisconsin pollsters tell CBS News that some voters who are backing Walker also back Mr. Obama, and maintain that the president is likely to take the state even if Walker holds onto his job.)

"If he did insert himself, the recall might have become a referendum on him, dealing him a blow in a contest over which he really doesn't have much control," CBS News Political Director John Dickerson said on Sunday's CBS "Evening News." Stephanie Cutter, Mr. Obama's deputy campaign manager, said on MSNBC Wednesday that the race "has nothing to do with President Obama at the top of the ticket and it certainly doesn't have anything to do with Mitt Romney at the top of the Republican ticket."

A campaign official insisted Monday that the Democratic National Committee and Obama campaign have worked on Barrett's behalf, noting that the DNC has directed $1.4 million to the state in the 2012 cycle, the presence of surrogates like Mr. Clinton and DNC Chair Debbie Wasserman Schultz, and the president's primary night endorsement of Barrett. But that has not been enough for some of Barrett's backers, including AFSCME president Gerry McEntee, who have complained that they have not gotten the support they need to counter a massive conservative mobilization on Walker's behalf, particularly early in the process.

While Republicans hold a major advantage on the airwaves thanks to the massive spending by Walker and his backers, Democrats have a big advantage in organization on the ground, thanks in part to a get-out-the-vote effort backed by organized labor. A Walker victory would thus offer evidence that the newly-legal unlimited spending by super PACs and other outside groups - which was unleashed by a pair of recent Supreme Court decisions, including Citizens United - can overcome the ground game Democrats have steadily built up around the nation in recent years.

A loss would likely effectively end Walker's political career, while a win would elevate him to superstar status among conservatives and likely prompt talk of a presidential run. For organized labor, a Walker loss would provide a major psychological boost while a Walker victory would feed the notion that the influence of organized labor - which made the governor's defeat a top priority - continues to wane.

While the national discussion of the race has been focused on Walker's controversial budget proposal, the fight between the two candidates has also been about unrelated issues. Walker has run ads against Barrett attacking him over what the Walker campaign says is an increase in violent crime in Milwaukee, while Wisconsin Democrats have attacked Walker with claims that he may be the target of a secret federal and state corruption investigation.

Also facing recall on Tuesday are the state's Republican lieutenant governor, Rebecca Kleefisch, and three Republican state senators. If Democrats successfully recall one of the GOP state senators, they will win a majority in the Wisconsin Senate and be able to block Walker's agenda even if he remains in office.

In the 2010 election, 2.1 million came out to cast ballots in the race between Walker and Barrett, which Walker won by five percentage points; this time around, election walkers say as many as 2.8 million people could come out, or 65 percent of the voting-age population. Two polls released Sunday showed a tight race, with Walker seeming to hold a slight lead: Democratic polling firm Public Policy Polling showed Walker leading Barrett 50 percent to 47 percent, while Angus Reid polling showed Walker with a 53 percent to 47 percent lead.

The polls suggested that Barrett's best hope for an upset victory lie in Democrats driving up turnout to levels last seen in the 2008 election, when Mr. Obama was on the Democratic ticket and turnout exceeded 69 percent. Possibly helping him on that front: The state allows same-day voter registration, and Wisconsin's new law requiring photo identification at the voting booths won't be in effect for the recall election because it is still being hashed out in the courts.