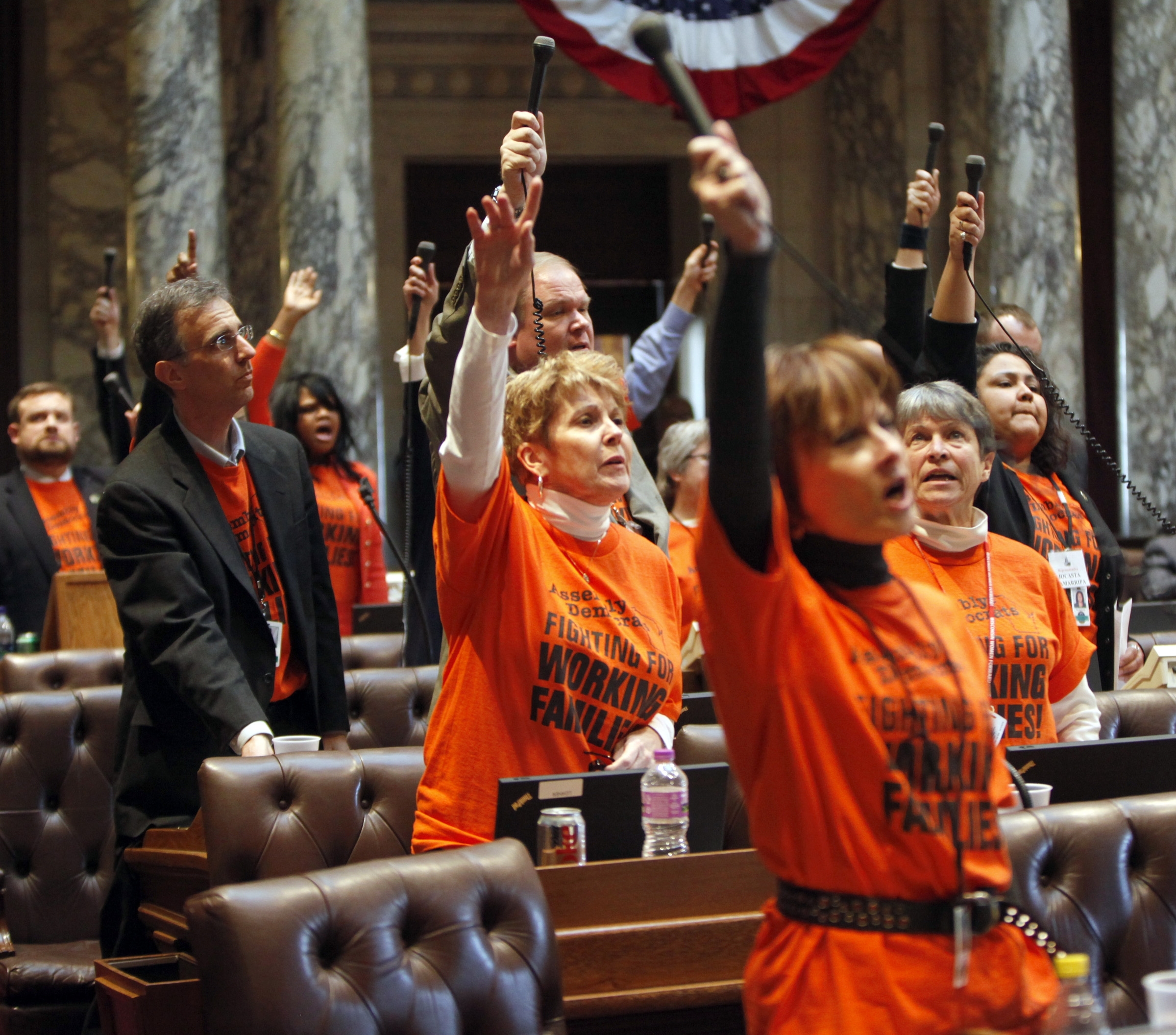 After weeks of protests, debate and acrimony, Republican Wisconsin Gov. Scott Walker today signed into law his controversial measure stripping public workers of most of their collective bargaining rights. Walker signed the bill privately Friday morning but will hold a signing ceremony in the afternoon.

Walker put out a statement Friday morning rescinding layoff notices for 1,500 public workers. He said the bill's passage "helped us save 1,500 middle-class jobs by moving forward this week with the budget repair. The state will now be able to realize $30 million in savings to balance the budget and allow 1,500 state employees to keep their jobs."

Wisconsin Democrats went to great lengths to oppose Walker's so-called "budget repair bill," and even though they failed, they say they'll be the ones who benefit at the ballot box as a result of Walker's effort.

"From a policy perspective, this is terrible," Mike Tate, the leader of the Democratic Party of Wisconsin, told the New York Times. "But from a political perspective, he could not have handed us a bigger gift."

The state Democratic party quickly raised $360,000 in contributions in the wake of the bill's passage in the state legislature, he said.

"Thank you, Scott Walker," Richard Trumka, president of the AFL-CIO, said in the speech in Washington Thursday. "We should have invited him here today to receive the Mobilizer of the Year award!"

Even though the bill has been signed, the AFL-CIO and other labor groups will be demonstrating outside of the capitol building in Madison Saturday. Rallies are expected to take place in other Wisconsin cities as well.

The mobilization of union workers and their supporters could very well pay off for Democrats in Wisconsin, where there are both strong conservative and liberal voting blocs. President Obama won the state handily in 2008, but Republicans essentially swept the 2010 elections, winning the governor's and the lieutenant governor's offices, the attorney general's seat, both houses of the state legislature, a U.S. Senate seat and two congressional seats.

Lee A. Saunders, secretary-treasurer of the American Federation of State, County and Municipal Employees, told the Washington Post that it's no coincidence Republicans are pushing anti-union measures in states that will be key in the 2012 elections.

"It's a coordinated effort in the battleground states to try to diminish the strength and diminish the power of the public-sector unions because we stand in their way," he said. "If they take us out, then the Democratic Party loses a very large grass-roots operation."

The Democratic Governors Association had some fighting words for Walker and other Republican governors pushing against public workers' collective bargaining rights.

"Democratic governors are faced with the same challenges facing Republican governors like Scott Walker, but we understand that our primary goal should be bringing people together to create new jobs and opportunity now," Maryland Gov. Martin O'Malley, the chair of the Democratic Governors Association, said in a statement yesterday. "With their singular focus on settling old political scores at the expense of everything else, Republican governors are practicing the worst, Washington-style politics and only serving to prolong our nation's economic recession."

The DGA released a video this morning charging that Walker "ignored the will of the people of Wisconsin by ramming through his union-busting, power-grabbing agenda that will do nothing to balance the budget or create jobs." The video mockingly points out that a number of Republican governors -- such as Rick Scott of Florida and Chris Christie of Wisconsin -- have split with Walker on the issue. "Republican governors didn't 'Stand with Scott' the first time," the video says. "What will they do now?"

While Democratically-aligned groups say Walker's bill will only serve to mobilize the left, conservatives are suggesting the governor is making the right move politically as well as policy-wise.

Jim Geraghty at the National Review said that polls showing the public is reacting negatively to Walker's agenda are "irrelevant."

"Get into any controversy and the numbers tremble, but look at former Michigan governor John Engler and [New Jersey Gov. Chris] Christie and, for that matter, Thatcher and Reagan," he wrote. "People cut through the noise, figure it out and the political dividend is huge. I'm almost sorry Walker had this quick a victory."