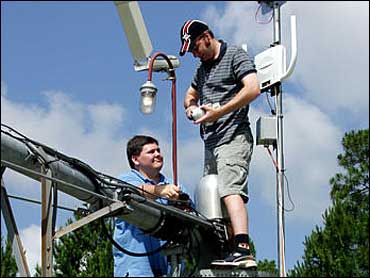 Farms of the not-too-distant future could be managed through wireless computer networks that allow farmers to sit in their pickups with a laptop and drive tractors, monitor soil moisture and even feed the hogs remotely.

Urban professionals have long been able to go to a Starbucks cafe or some other Wi-Fi Hot Spot to connect to the Internet, but the technology has lagged in rural areas, where many folks still rely on a slow-speed dial-up connection.

Stuart Pocknee, leader of advanced technologies at a University of Georgia agricultural lab, believes some aspects of wireless networks will be common on farms in about five years, helping growers with insect control, opening gates for livestock and controlling irrigation pumps.

"It's a farm-wide Starbucks, where a farmer can get his cup of coffee, sit in his pickup truck and log on to the Internet," Pocknee said as he connected to the Web himself in a cotton field about a half-mile from the lab.

At least two Georgia farmers are already using the technology. One uses wireless video to monitor vegetable packing. Another relies on a wireless network to monitor irrigation systems.

Pocknee can sit in his office and see the position of a 600-foot irrigation system in a nearby field on his computer screen. The system is equipped with a global positioning system to provide its location. A wireless video camera shows how it is operating.

"We're still struggling with a lot of issues," Pocknee said. "We've got to work on reliability, robustness, ease of use and range."

James McKinion, an electronics engineer with the USDA's Agricultural Research Service in Starkville, Miss., said wireless networking is being used on a 1,600-acre farm near Macon, Miss., and on a 12,000-acre farm in the Mississippi Delta.

The smaller farm uses the standard 1.4 GHz Wi-Fi frequency, but a combination of 2.4 GHz and 900 MHz is required to cover the distances and carry through trees on the larger farm, he said.

The technology has proven very useful in early season insect control, he said.

Qin Zhang, a University of Illinois expert on computer-aided farming systems, said wireless networks can provide the real-time information that farmers need for maximum efficiency. He believes some farmers will be using it in a few years.

Zhang has conducted extensive research with tractors that a farmer could control through a wireless network. He's also worked with robotic tractors guided by GPS signals.

Pocknee's lab has created a boxy contraption that has rubber tires, a jumble of wires and hoses, a GPS system and several computers. It can be guided by GPS signals or a human with a joystick through a wireless network.

Already, it's capable of tracking across a field far more accurately than the most experienced human tractor driver, researchers said.

"What we're really scared of is killing someone if it goes nuts," Pocknee said of the robotic tractors. "The answer might be a fleet of small ones. It's better to have one bounce off someone, than run over them."