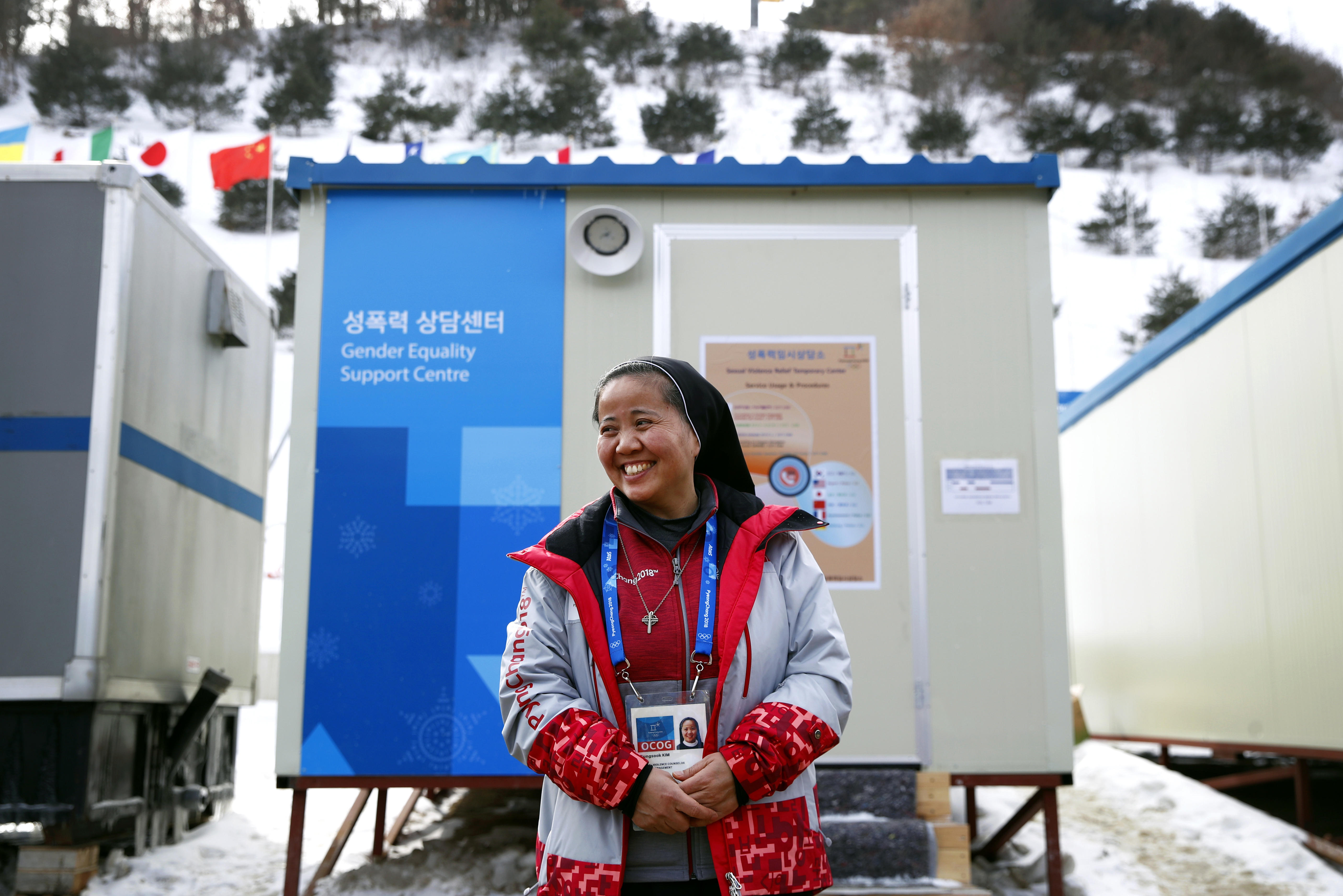 PYEONGCHANG, South Korea -- A Catholic nun waits eight hours each day at a folding table, ready for a call but praying nothing has happened to cause the phone to ring.

Her office, the "Gender Equality Support Centre," a tiny trailer tucked between a bathroom and a police post under the ski lift at the Phoenix Snow Park, is a nondescript acknowledgment of the revolution in women's rights that, outside the Olympic gates, is thundering through the world.

Sungsook Kim -- who goes by her religious name, Sister Droste -- speaks little English. But to describe her mission, she says the name of the American movement: "me too."

The Winter Olympics in Pyeongchang arrives amid the reckoning that has brought down celebrities, politicians and the entire board of U.S.A Gymnastics. NBC star Matt Lauer was fired for sexual misconduct, and his accuser said the harassment began at the last Winter Olympics, in Sochi.

During the Summer Games in Rio, two athletes were accused of assaulting housekeepers. A horrified world recently watched dozens of women and girls, some of them Olympians, describe in detail how Larry Nassar, the gymnastics doctor, had sexually abused them for decades as layers of elite athletic organizations failed to stop it.

"The whole world just got a front row seat to a master class in trauma," said Nancy Hogshead-Makar, a former Olympic swimmer and activist calling on Olympic committees to do much more to protect vulnerable athletes.

"This is what trauma does. This is what it looks like," she says. "It stops professional careers, it stops somebody's education, it stops people from being close to other people, it invades their ability to feel safe."

So this year, for the first time, there is an organized and advertised contingent of offices designed to help sexual assault victims dotted around the sprawling Olympics venues -- from clinics that cater to world-class athletes to Sister Droste's four trailers, organized by the local community for the army of 14,000 volunteers, most of them young, 70 percent of them female.

"'#metoo' allowed us all to see that it's not the victim's fault, being sexually harassed. It's not because of their appearance. It gives courage to the victims," Droste said through a translator.

So far they have responded to four reports of harassment, Droste said, the details of which she could not describe because of confidentiality rules, but said they were not severe.

"Having equal rights," the sister said, "men and women, makes it possible for us to accomplish freedom."

Olympic organizers have finally decided it's time to get serious.  On Sunday, Prince Feisal of Jordan, a board member on the International Olympic Committee, said the Olympic body should pursue the fight against sexual assault and harassment as seriously as it does doping.

"The current scandal begs the question: Why aren't we doing more?" he said.

The United States Olympic Committee has come under withering criticism in the wake of the Nassar abuse scandal. Aly Raisman, a three-time Olympic gold medalist assaulted by the doctor, publicly rebuked the committee for failing to spot and stop the abuse, and for not reaching out to the victims once it was made known.

This happened in a prosperous country with a powerful Olympic committee and the resources to protect athletes, Feisal said. "Imagine countries and federations who've got nothing."

The International Olympic Committee (IOC) launched a program last year aimed at coaching athletic organizations around the world how to implement policies to protect vulnerable athletes. In 2016, they hastily put together a "safeguarding" program for the summer games in Rio, in which an officer was available to field allegations of abuse and route them to medical services or law enforcement.

Angela Ruggiero, a senior American IOC member, told Reuters news agency that achieving gender parity at the Olympics has always been a priority.

"Having visible female role models is one of the most important things that we as an organization do," said Ruggiero, a four-time ice hockey world champion and Olympic gold medalist.

But the plan was approved in June and the Olympics began in July, and they did not have time to effectively spread the word about the program, said Susan Greinig, the safeguarding officer.

As she watched the Nassar saga unfold on television, she remembers feeling a mix of regret and motivation.

"I just thought, if only we could have put this help in place earlier to save these people. But they are an example of future potential victims that we will save, that we will give a voice to," she said. "Out of every evil there can be some good that comes out of it."

This year, she has an office in the Olympic villages, and marches around with a pin on her jacket that reads: "Need to talk?" A sign is plastered to her office door says "I see, I hear, I speak." The posted hotline number for athletes to report sexual abuse routes to her cell phone and she checks it every few seconds.

Three days into the Games, no one had called it yet.

"After these Games, if I didn't have any calls, you could read two ways into that: You could believe people still didn't dare, or there just weren't any incidents that happened during the games," she said. "Obviously, I prefer to believe the second."

"THEY ARE LISTENING NOW"

The odds are that among the women chasing medals on Pyeongchang's slopes and slides, some have stories to tell. Scientific research shows that the more elite an athlete is, the more likely they are to be victims of assault, Greinig knows, because the higher an athlete climbs the more they have to lose. Abusers know that, and exploit it. The Olympics is a natural home to the kind of power dynamics that foster abuse: coaches to athletes, athletes to maids.

Greinig does not expect the Olympics would be the venue most would choose to blow the whistle on longstanding abuse. Athletes are away from home, focused on winning, surrounded by strangers.

But she hopes their efforts send a signal -- to victims that they will be believed and protected, and to abusers that the sporting world is getting serious about the issue, even if it is overdue. She has worked for the IOC for 21 years, with a focus on preventing sexual abuse since 2004.

"It used to be frustrating to make people listen," she said. "But they are listening now."

She is compiling a list of committees and federations as they take steps to implement protections for athletes - a sort of shaming technique she hopes forces slow-moving organizations to get on board as the #metoo movement spreads from the United States around the globe.

Sister Droste, 50, has watched women's rights in her country slowly improve. Women are more educated now, more confident, yet remain "far behind" other countries. Outside the Olympics, she works in a hotline counseling center for victims of sexual violence, so she confronts the inequities every day. When she looks around, she still sees most positions of power in her country filled by men.

But she is encouraged by signs that the #metoo movement landed last month in South Korea.

Seo Ji-hyeon, a 45-year-old prosecutor, went on national television to say she was groped at a funeral by a high-ranking government official. When she reported it, instead of punishing him, her superiors demoted her by sending her away to work in a fishing village. Her story inspired others to come forward in recent days - a lawmaker, a university student, a news reporter.

She hopes any of the thousands of volunteers in her charge know they have a voice now, too. Meanwhile, she runs four centers during the Olympics that are staffed by 29 professional volunteer counselors working in conjunction with medical teams and law enforcement.

"I am praying to God that nothing happens," Droste says. "But we are here."