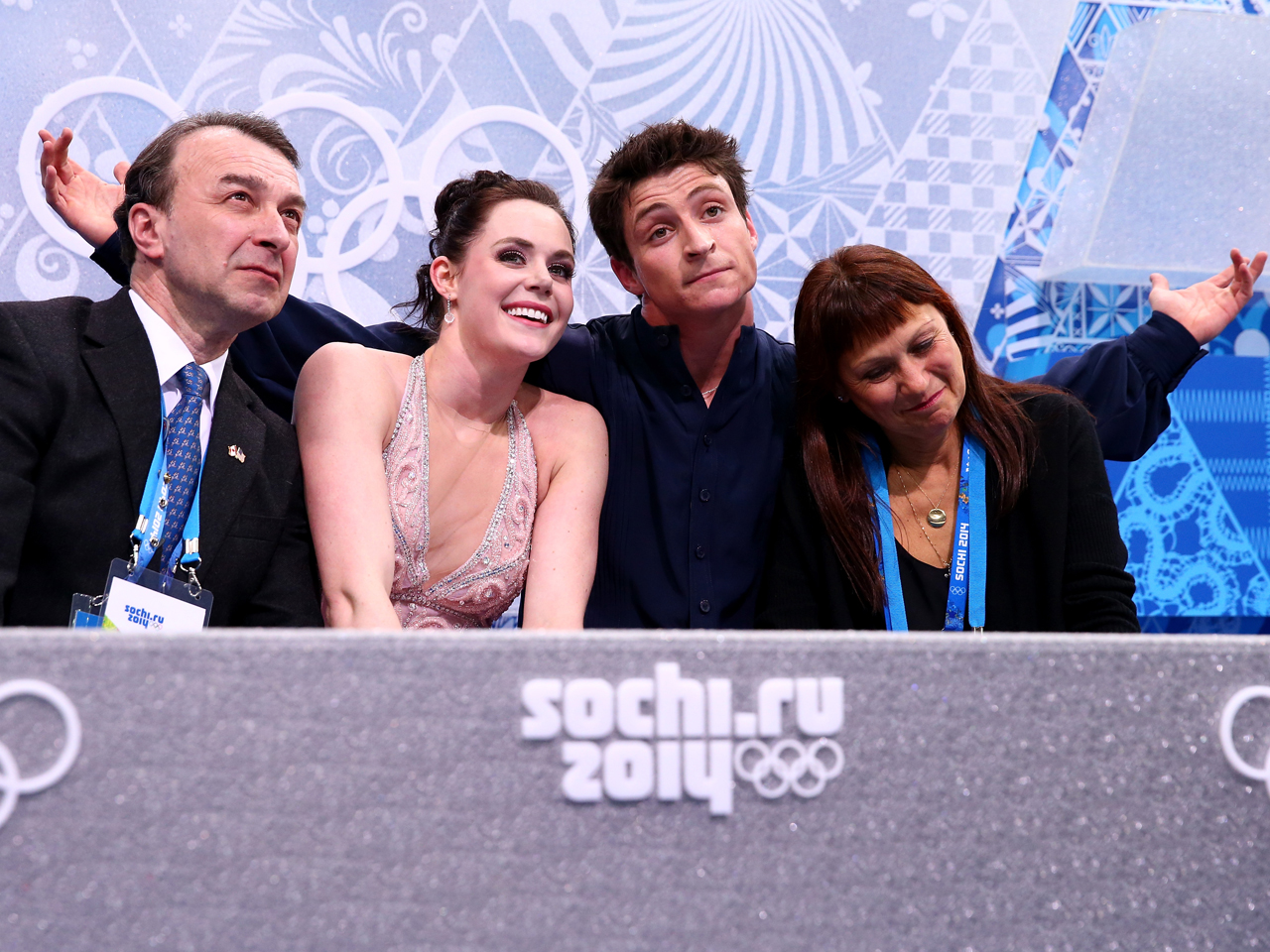 SOCHI, Russia - Like bruises from falls and cuts from blades, split loyalties come with the icy territory in figure skating.

Canadian ice dance silver medalists Tessa Virtue and Scott Moir on Tuesday bemoaned the split allegiance of coach Marina Zoueva, who also works with American gold medalists at the 2014 Winter Olympics Meryl Davis and Charlie White. Virtue and Moir have been longtime students of Zoueva's, as have Davis and White.

"We sometimes felt like (Zoueva) wasn't in our corner," Moir said, more in the way of stating a fact as he and Virtue perceived it than as a complaint. "We had some odd things happen this year that hadn't happened before. For the first time, she wasn't there."

Zoueva is the acknowledged master of the craft, and like many mothers, she'll never say which one of her “children” she likes best, reports CBS News correspondent Mark Phillips.

Moir mentioned Zoueva not being at the Canadian championships this year. That event coincided with U.S. nationals, which Zoueva did attend. Each couple won its national title.

Zoueva told CBS News she did not choose between the two, adding “I love and respect both teams.”

The routines she created for the two pairs are completely different in character. The Canadians' is smooth, subtle, artistic  -- the qualities that won them gold last time.

The American routine is fast, athletic, exciting, and has been scoring well all season on the circuit, and was judged good enough for gold here.

That didn't happen for the 2010 gold medalists, although they insisted they understood why Zoueva spent so much time with Davis and White, and they praised Zoueva for how she handled the dicey situation.

"The shoe was on the other foot," Moir said.

"Whatever differences we had to take care of on our own," Virtue added, noting the support the couple got from the Canadian federation.

Zoueva said after the short dances that working with the world's two best ice dance teams, as well as with many other highly ranked duos, "is a balancing act."

"I keep both couples in my heart," the renowned Russian coach said Sunday, when Davis-White stood first and Virtue-Moir were second heading into the free dance. "They train together nine years, in the same group and on the same ice with each other since they were babies. They are like a generation, and they are still skating together and grew up and made the same progress and go on together."

When Virtue and Moir won the Vancouver Olympics ahead of Davis and White, they were on the cutting edge of ice dance. But the Americans overtook them in the last four years and came to Sochi as world champions and Grand Prix Final winners.

There were times in the last year when Virtue and Moir had to re-evaluate their relationship with the coach. Moir said they went to Zoueva "on countless occasions" to tell her they would not be happy with a silver medal.

"We felt a little bit like it was getting away from us," Moir said. "We were trying to get balance. She listened to us and kind of reshaped our programs. She's an artist, too, and wanted to keep her vision."

The Canadians, who have not yet announced future plans but are expected to retire from competition, were not downgrading the silver after it was in their hands. They admitted to being thrilled with how well they skated.

"We couldn't have asked for more about our performances," Virtue said. "It's nice to be satisfied and content with our job. We've managed to create the Olympic moment."

Many skaters griped about the scoring this year. The performances are evaluated for subtleties not visible to normal people.  Many in the skating twittersphere thought the Canadian pair was technically superior but marked lower.

Losing skaters were left to wonder whether the results were predetermined -- a naughty word in scandal-plagued skating -- because the winner's style was currently in favor.