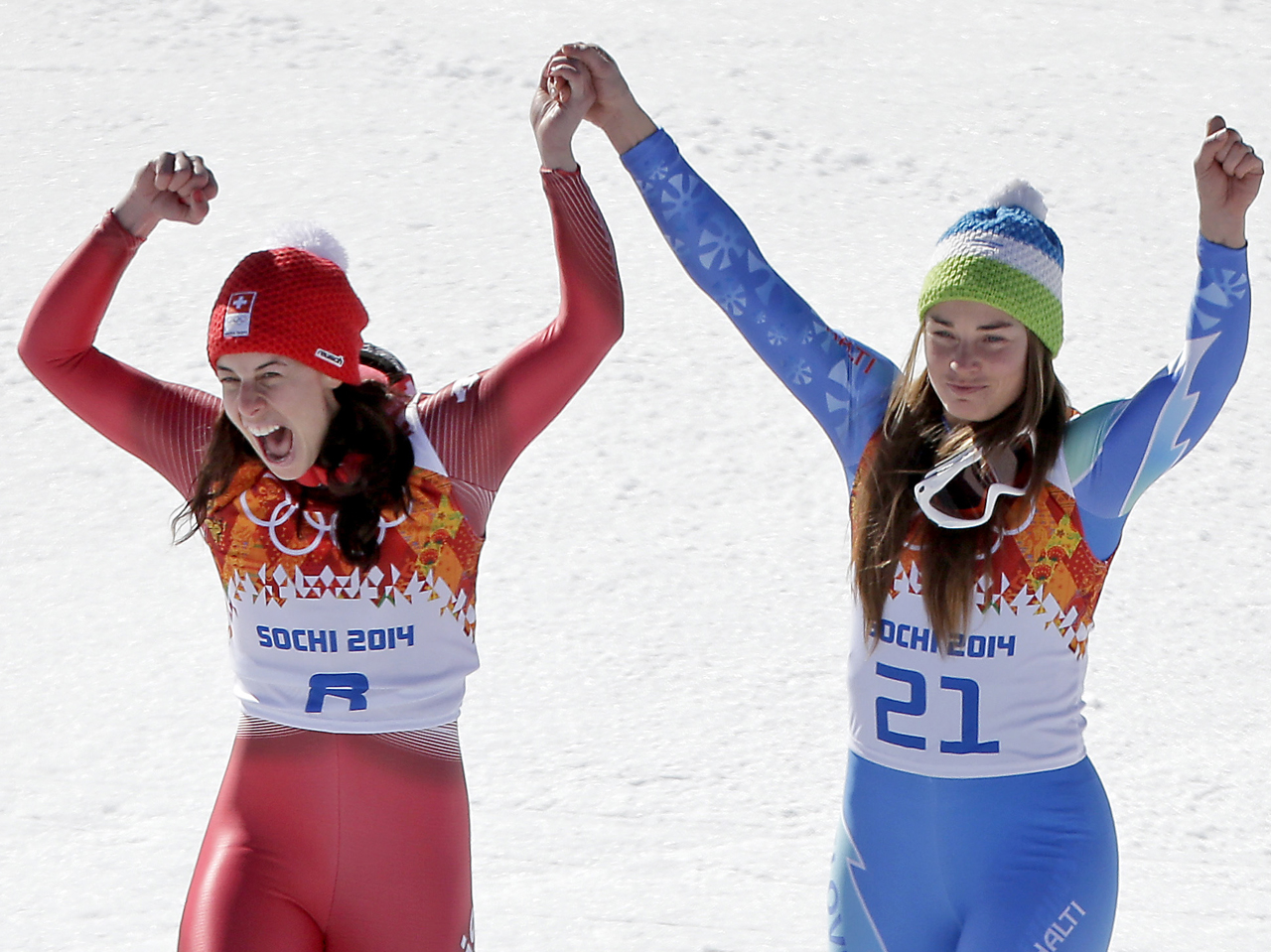 KRASNAYA POLYANA, Russia -- For the first time in Olympic history, an Alpine skiing race ended in a tie.

Tina Maze of Slovenia and Dominique Gisin of Switzerland both sped down the Rosa Khutor course 1 minute, 41.57 seconds on Wednesday to share Olympic gold in women's downhill.

A few moments later, the good friends held hands as they stepped up to the top of the podium.

"I'm sure glad I'm going to share this gold with Tina," said Gisin, who will get a medal all to herself. "She's such a great woman and one of the greatest athletes of our sport."

Lara Gut of Switzerland earned bronze, 0.10 behind the winners.

Wednesday's marquee event was the eighth time that Olympic gold has been awarded to two competitors in the Winter Games, and the first time in Alpine skiing.

"Maybe just one finger or one hand can change the color of a medal," said Maze, adding there was no need to slice up their finishing times into thousandths of seconds rather than hundredths.

"It's even more interesting because it's not a usual thing," Maze said. "It's something special."

Still, if the rare occurrence had to happen, it might have been predicted that Gisin and Maze would be involved.

For the 28-year-old Gisin, it was only her third downhill victory, but two have been in ties. In January 2009, she shared a World Cup victory with Swedish great Anja Paerson in Altenmarkt-Zauchensee, Austria - the last time a women's downhill ended in a tie.

Maze was even involved in a three-way tie in October 2002. The World Cup season-opening giant slalom in Soelden, Austria, saw Maze, Andrine Flemmen of Norway and Nicole Hosp of Austria all occupy the podium's top step. Hosp placed ninth Wednesday.

Wednesday's Olympic race seemed in Maze's hands when she led Gisin at each time split and speed check. But she then appeared to make a small mistake before the final slope, which was slowed by softening snow.

Maze stretched both arms overhead and threw her race goggles in the air after seeing that she shared the lead. It's the best result in a difficult season for the Slovenian, who has struggled to match her exceptional 2013 campaign.

Though Maze won two silvers at the 2010 Vancouver Olympics, Gisin earned her first major medal. When Maze completed her run, Gisin came out of the leader's box and into the finish area to give her a hug.

Four years ago, Gisin's Olympic downhill ended when she crashed off the final jump and endured a long slide to the finish line, where she hit a bank of snow and was tossed into the air.

Then, Gisin sustained a concussion. This time, the Swiss racer was crying while speaking with her grandparents on her mobile phone.

"It was very emotional," Gisin said. "They did so much for me; my whole family did. This is just very nice to share it with them."

The last tie in Olympic skiing happened in men's super-G at the 1998 Nagano Olympics. Didier Cuche of Switzerland and Hans Knauss of Austria both got silver behind winner Hermann Maier of Austria.

Pre-race favorites Maria Hoefl-Riesch of Germany and Julia Mancuso of the United States slipped out of contention, racing after Gisin.

Hoefl-Riesch, who was looking for a record-equaling fourth Olympic Alpine gold, was 1.17 back in 13th place. Mancuso trailed by 0.99 in eighth place after losing more than a half-second in the lower sections.

"I really thought Tina could do it," Mancuso said. "She almost did the same thing that I did on the bottom, but she was going a little faster so I think she pulled it off."

Mancuso had been fastest in the downhill portion of Monday's super-combined, in which she took bronze and Hoefl-Riesch won. Maze was fourth.

That day, Gut had been second-fastest in downhill before letting a medal slip by skiing out in slalom.

On Wednesday, Gut was in tears again, seemingly unable to understand how her speed - clocking 64.9 mph - did not translate into a faster time.

Gut placed her hands on her bowed head and looked exasperated before walking over to hug her winning teammate.

"It's cool to win a bronze, but when you know you can do more, at the beginning I think it's normal to be a bit disappointed," Gut said.

In a nasty crash, No. 4 starter Marie Marchand-Arvier of France slid back-first into safety fencing after losing her balance over a jump. She did not appear to be seriously hurt.