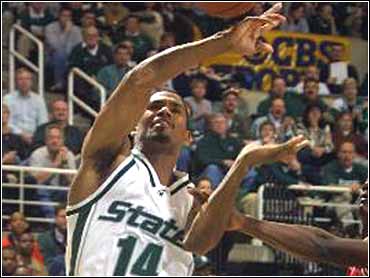 Jason Richardson is beginning to get so good, it's scaring opponents.

Defying gravity with dunks and rebounds will always be a part of his repertoire, but now he's making 3-pointers, creating mid-range shots off the dribble and playing stingy defense to transform himself from just an awesome athlete to a complete basketball player.

Richardson scored 24 points as No. 3 Michigan State beat Ohio State 71-56 Sunday to extend the nation's longest home winning streak to 40 games. Michigan State (15-1, 4-1 Big Ten) will play its next three games and five of its next six on the road.

"He's gone from a guy that a year ago we wouldn't guard on the perimeter to a guy that you absolutely have to guard," Ohio State coach Jim O'Brien said.

He understands why teams chose not to guard him on the perimeter in the past.

That's not the only motivating force in Richardson's mind.

In Michigan State's only loss this season, a 59-58 setback at Indiana, Richardson missed the front end of two one-and-ones in the final minute.

He said the disappointment from that afternoon three weeks ago has motivated him to take 1,000 shots almost every day since.

Michigan State coach Tom Izzo has been pleased that Richardson's hard work has translated into success.

"He's starting to shoothe ball better and better," Izzo said. "And our team is getting him the ball. He's had ready-to-shoot shots and he's been ready to shoot."

The Buckeyes (12-6, 3-3) kept the game close for the first 25 minutes, but eventually fell to Michigan State's superior depth and talent, even without Andre Hutson.

The senior forward, who has started 113 of 121 games in his career, was relegated to his bench as he continues to recover from pneumonia.

Zach Randolph helped make up for the loss with 14 points and 10 rebounds. Adam Ballinger, who replaced Hutson in the lineup, scored 10 points. Charlie Bell also had 10.

O'Brien wanted to his player to limit their turnovers and keep Michigan State, the nation's best rebounding team, off the offensive glass.

They weren't able to do either as the Spartans turned 20 offensive rebounds into 26 points and 17 Ohio State turnovers into 20 points.

Michigan State did take the lead for good midway through the first half, but it struggled to dominate the Buckeyes like it has so many teams at home.

Just five of the last 40 visitors to the Breslin Center have lost by fewer than 10 points.

"I think this is where the good teams have to find ways to survive," Izzo said. "I didn't think it was the prettiest game on either side. But right now, I'm taking any win and running with it. You look at the last two weeks, there's been a number of Top-25 teams beaten, so it's survival time."