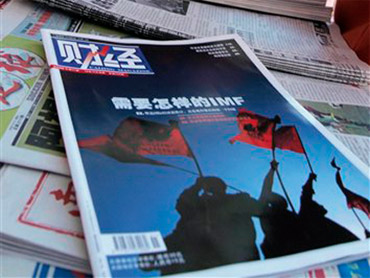 The editor-in-chief of a hard-driving Chinese magazine that tackled tough subjects such as corruption, pollution and worker's rights resigned Monday, casting doubt over prospects for greater media independence.

Many say founder Hu Shuli's departure could spell the downfall of Caijing, an 11-year-old financial news magazine that under her guidance pushed boundaries with the country's censors and chased stories that embarrassed the government. Its aggressive reporting on SARS in 2003 forced the government to acknowledge the scope of the crisis - which it had tried to keep secret - and to change the way it handles public health scares.

Insiders said Hu's team had been trying without success to wrest greater editorial control from its Hong Kong-listed publisher.

Though the magazine is not shutting down, Goldkorn and others said Caijing would be gutted by Hu's resignation. A less-aggressive Caijing could set back efforts to build an independent watchdog media.

"No one will take Caijing seriously now," said Goldkorn, editor in chief of Danwei, a Web site that covers China's media industry. "Hu Shuli is almost half the brand, if not more."

Caijing and a few other mainland publications such as Southern Metropolis Weekly have led efforts to make Chinese media more probing and independent, but the magazine was hit hard this year by falling advertising revenue due to the global financial crisis.

Two Caijing employees said Hu left because the publisher, SEEC Media Group, refused her requests to give editorial staff more money and greater authority over content. One source said dozens of the magazine's 180-strong editorial staff also resigned Monday in a show of support for Hu.

The two spoke on condition of anonymity because they were not authorized to announce the resignations.

Managing editor Wang Shuo said on Twitter that he had resigned, but he did not explain why.

SEEC has other magazines in its portfolio, but Caijing is its flagship publication. A woman who answered the phone at SEEC's Hong Kong office and would only give her surname, Chan, said the company had no comment and referred calls to a Beijing office, where the phone rang unanswered.

Caijing spokeswoman Heidi Zhang told The Associated Press that Hu has no immediate plans to start a new magazine or other publication.

Hu will stay at Caijing for about a month to help with the transition and has been offered a job at Sun Yat-sen University in southern China's Guangzhou which she is likely to accept, Zhang said.

The shake-up has raised questions about the future of a deal between Caijing and Hong Kong tycoon Richard Li to start an English-language financial news service focused on China. It is scheduled to launch next year.

Cai Business Indepth Ltd., the Hong Kong-based company set up to run the service, said in an e-mailed statement late Monday that it was "monitoring developments" at Caijing.

"Regardless of the changes announced at Caijing, we have understandings in place which ensure that we will continue to have exclusive content from China's premier financial news editors and journalists," it said, without providing details.

A person familiar with the deal said Cai Business Indepth was primarily interested in cooperating with Hu and her team but would probably wait and see if the magazine's departing editorial staff could get backing for a new publication that Cai could then partner with.

If the majority of the team stayed at Caijing, however, Cai would likely maintain its current arrangement, said the person familiar with the deal, who asked not to be named because of the sensitivity of the issue.

Swirling rumors about problems at Caijing were confirmed last month when the magazine's general manager and 60 to 70 employees from the business department resigned. That news triggered speculation that Hu was preparing to start a new venture and a section of the business team had left to lay the groundwork. However, there has been no confirmation that any new venture is forthcoming.

Yuen-ying Chan, a journalism professor at the University of Hong Kong, said she hadn't spoken to Hu about her future but considered it unlikely Hu would abandon her career in publishing.

Caijing's revenue fell 16.9 percent in the first half of 2009 compared with the same period a year earlier mainly due to a decline in advertising revenue, SEEC's latest financial report said. The magazine generated approximately $54.1 million Hong Kong dollars ($6.9 million) in the first two quarters.