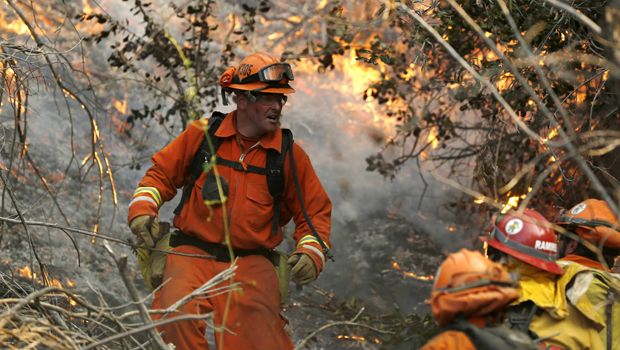 GLENDORA, Calif. -- Nearly 2,000 residents were evacuated and five homes burned in a wildfire that started early Thursday when three people tossed paper into a campfire in the dangerously dry and windy foothills of Southern California's San Gabriel Mountains, authorities said.

Embers from the fire fanned by gusty Santa Ana winds quickly spread into neighborhoods below where residents were awakened in the predawn darkness and ordered to leave.
The three suspects, all men in their 20s, were arrested on charges of recklessly starting the fire that spread smoke across the Los Angeles basin and cast an eerie cloud all the way to the coast.

"They were tossing papers into the campfire, and a breeze had kicked up and set this fire," Glendora Police Chief Tim Staab said.

Two firefighters were also injured. One suffered minor burns and the other was hit by a rolling rock, Osby said.

The threat to communities was subsiding Thursday evening, Osby said. He said hundreds of homes were saved because of firefighters' preparations.

Firefighters were able to save a historic mansion built by the Singer sewing machine family, but a guest house on the estate was destroyed, displacing several tenants.

Scott Wilhite, who rented a room in the guest house, told CBS News he lost everything.

"Everything I have, except for what I have on," he said. "I don't have my driver's license, no money, no shoes, no pants."

At least 2 1/2 square miles of dry brush were charred in the wilderness area about 25 miles northeast of downtown Los Angeles.

"We're underneath a giant cloud of smoke," he said. "It's throwing quite the eerie shadow over a lot of Glendora."

Police said the three suspects were detained near Colby Trail, where the fire was believed to have started. At least one was homeless, Staab said. Police identified the suspects as Robert Aguirre, 21, of Los Angeles; Jonathan Carl Jarrell, 23, of Irwindale; and Clifford Eugene Henry Jr., 22, of Glendora.

"They are being cooperative," Staab told reporters. "I've been told by detectives that one has made an admission to our detectives and has admitted to setting this fire."

Two of the men were detained when police responded to a call of suspicious people walking away from the fire, Staab said. The third man was detained after being given a ride away from the danger area by the U.S. Forest Service.

The notorious Santa Anas, linked to the spread of Southern California's worst wildfires, picked up at daybreak. The extremely dry Santa Anas blow downslope and can push fires out of the mountains and into communities below.

The area, which has been historically dry, has been buffeted by the winds which have raised temperatures into the 80s. The Santa Anas typically begin in the fall and last through winter into spring. A wet winter reduces fire risk, but the whole state is experiencing historically dry conditions.

Los Angeles normally gets nearly 15 inches of rain each year. In  2013, just 3.6 inches fell. There has not been a single drop since Jan. 1."We're just bone-dry here, really from Texas to California, from Oregon to Colorado," Bill Patzert, a climatologist at NASA's Jet Propulsion Laboratory, told CBS News correspondent Ben Tracy in an interview broadcast Monday.
Patzert said what's known as "Pacific decadal oscillation" has warmed waters in the upper Pacific. That has created a strong high pressure system pushing the jet stream north. It's so persistent meteorologists have nicknamed it "The Triple R" for ridiculously resilient ridge of high pressure.

On Thursday, TV news helicopters spotted embers igniting palm trees in residential yards as firefighters with hoses beat back flames lapping at the edges of homes. Homes are nestled in canyons and among rugged ridges that made access difficult.

Glendora police said officers went door to door ordering residents of the city of 50,000 to leave. Citrus College, located in the heart of Glendora, canceled classes for the day.
Several schools were closed. The Glendora Unified School District closed Goddard Middle School, which was being used as a fire department command post. District spokeswoman Michelle Hunter said 900 students attend the school, which is near the fire and within the evacuation area.

Between 1,700 and 2,000 residents were evacuated and the order included 880 homes in Glendora and the neighboring foothill city of Azusa. Many residents, some wearing masks, used garden hoses to wet the brush around their houses, even as firefighters ordered them to leave.

"Don't waste any more time with the water. Time to go," a firefighter ordered.

More than 700 firefighters were on the scene. The Los Angeles County Fire Department deployed seven engines and three helicopters to the fire, which was reported around 5:50 a.m. and grew rapidly. Officials added to the firefighting aircraft with a water-dropping Super Scooper plane.

A man was photographed on the roof of a home talking on a cellphone as he surveyed the smoke-choked sky.

The smoke spread across metropolitan Los Angeles to the coast and was visible from space in Weather Service satellite photos. The South Coast Air Quality Management District issued a smoke advisory and urged residents to avoid unnecessary outdoor activities in areas directly impacted by the smoke.
Jennifer Riedel, 43, anxiously watched as the orange-hued plume descended on her neighborhood in Azusa.

"I woke up from the rattling windows from the helicopters overhead, and I heard the police over the P.A., but I couldn't hear what they were saying," Riedel said. "I'm hearing from neighbors that we're evacuating, but I'm waiting for a knock on the door."

Riedel said her husband left for work early and she was getting her children, ages 5 and 7, ready to evacuate.

"They're a little nervous, but I'm keeping calm for them," she said. "I've been loading the car up with important papers and getting the kids dressed. We'll just take some essentials and get going if we have to."

The last catastrophic fire in the San Gabriel Mountains broke out in 2009 and burned for months. The flames blackened 250 square miles, killed two firefighters and destroyed 209 structures, including 89 homes.

About 70 miles to the northwest, a fire has burned at least one acre of tinder-dry chaparral near Pyramid Lake, said Los Angeles County Fire inspector Tony Akins. As many as 115 firefighters battled the flames and water-dropping helicopters were diverted from the fire in Glendora. The blaze started just after 11 a.m. east of Interstate 5 and involved a mobile home, which didn't appear occupied, Akins said. The cause was under investigation.

California is in a historically dry era and winter has brought no relief.

Red flag warnings for critical fire weather conditions were posted from Santa Barbara County south through Los Angeles to the U.S.-Mexico border, along the spine of the Sierra Nevada, and in areas east and north of San Francisco Bay.

Fires that struck windy areas of the state earlier in the week were quickly quashed by large deployments of firefighters, aircraft and other equipment before the flames could be stoked by gusts into major conflagrations.

Large parts of Southern California below mountain passes, canyons and foothills have been buffeted all week by the region's notorious Santa Ana winds.

Spawned by surface high pressure over the interior of the West, the Santa Anas form as the cold air flows toward Southern California, then speeds up and warms as it descends in a rush toward the coast. Some of the most extreme gusts reported by the National Weather Service topped 70 mph.

These offshore winds also raise temperatures to summerlike levels. Many areas have enjoyed temperatures well into the 80s.