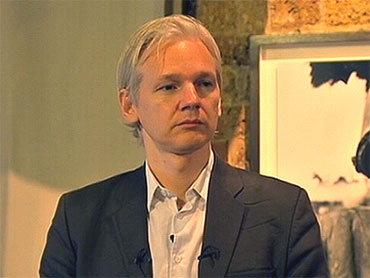 WikiLeaks' chief claims his organization doesn't know who sent it some 91,000 secret U.S. military documents, telling journalists that the website is set up to hide the source of its data from those who receive it.

Editor-in-chief Julian Assange says the added layer of secrecy helps protect the site's sources from spy agencies and hostile corporations. He acknowledged that the site's anonymous submissions raised concerns about the authenticity of the material, but said the site has not yet been fooled by a bogus document.

Assange made the claim in a lengthy hour talk before London's Frontline Club late Tuesday, in which he outlined the workings of WikiLeaks and defended its mission.

Meanwhile, a Pentagon investigation will determine whether criminal charges will be filed in the leaking of the Afghanistan war secrets, U.S. Attorney General Eric Holder said Wednesday.

Holder, speaking to reporters during a visit to Egypt, said the Justice Department is working with the Pentagon-led investigation to determine the source of the leak.

"I deplore the release of classified information. It is not really in the national interest of the United States to have that kind of material leaked," Holder said.

Pentagon spokesman Geoff Morrell said Tuesday that the Defense Department has launched a "very robust investigation" into the leak of secret documents on the war in Afghanistan published Sunday by WikiLeaks, an online site.

The WikiLeaks material ranges from files documenting Afghan civilian deaths to evidence of U.S.-Pakistani distrust. President Barack Obama said he was concerned about the massive leak of sensitive documents, but the papers did not reveal any concerns that were not already part of the debate over the war.

But U.S. military and intelligence officials are worried about the impact on the military's human intelligence network built up over the past eight years inside Afghanistan and Pakistan.

An earlier investigation by the Army's criminal investigative division led to a prosecution in a separate case of leaks to the website. Bradley Manning, an Army intelligence specialist, has been charged with multiple counts of mishandling and leaking classified data, on suspicion he handed over to Wikileaks a classified 2007 video that shows a group of on unarmed men in Iraq walking down the street before being repeatedly shot by the Apache helicopters. The American gunners can be heard laughing and referring to the men as "dead bastards."

If convicted on all charges, Manning could be sentenced to a maximum 52 years in prison.