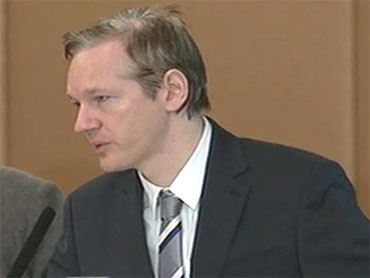 The founder of WikiLeaks urged U.S. authorities on Thursday to probe possible rights abuses in Afghanistan and Iraq instead of focusing on tracking down who leaked that information to his group.

Australian-born Julian Assange said the U.S. hadn't opened any probes into the alleged incidents detailed in secret documents published by WikiLeaks since the group began putting them online in July.

"It is time the United States opened up instead of covering up," he told reporters near the U.N. European headquarters in Geneva, where on Friday the U.S. will face its first comprehensive human rights review by the global body.

Officials at the U.S. mission in Geneva declined to comment, but Pentagon officials have previously called the leaks a threat to U.S. national security.

Assange noted that Britain and Denmark had already taken some steps to examine possible wrongdoing from the leaked U.S. war logs.

Following the recent publication by WikiLeaks of nearly 400,000 field reports by American soldiers in Iraq, the U.N.'s top human rights official said the U.S. and Iraq should prosecute anyone believed responsible for torture, unlawful killings and other abuses.

WikiLeaks has come under increasing pressure since July, when it first published 77,000 secret U.S. documents on the war in Afghanistan.

Assange said his group now devotes 70 percent of its resources to defending itself from attacks against its collaborators and its financial infrastructure, which he said were "mostly by the U.S. military and U.S. intelligence."

"We have never faced such difficulties as an organization as in the past three months," he told reporters, flanked by two bodyguards.

Assange said future leaks would cover other countries as well as the United States.

CBS News national security correspondent David Martin said that the material reveals "the war was even uglier than we thought."

These are the same documents - part of the largest publication of secret material in history - that Pentagon officials have been urging the website WikiLeaks and the media not to publish.

"These are reports filed by American soldiers out in the field, and they recount in really graphic detail the day after day after day of violence that was killing mostly Iraqi civilians," Martin said.