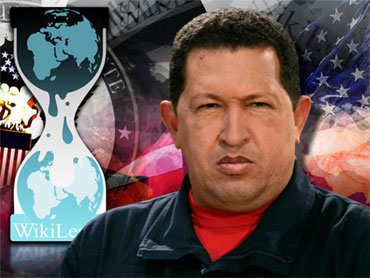 Calderon told then-U.S. Director of National Intelligence Dennis Blair that Chavez uses social programs, including sending doctors to Mexico, to gain political influence in the country, according to the memo dated Oct. 23, 2009.

Calderon told Blair he was trying to isolate Venezuela through the Rio Group and added that the United States needed to engage Brazil because the South American country "is key in restraining Chavez."

"Calderon lamented that President (Luiz Inacio) Lula (da Silva) has been reluctant to do so," the cable reads.

The cable says Calderon "went out of his way" to point out he believes the Venezuelan leader financially supported his leftist rival, Andres Manuel Lopez Obrador, in the 2006 presidential campaign.

Lopez Obrador, of the leftist Democratic Revolution Party, or PRD, narrowly lost the 2006 presidential election to Calderon of the conservative National Action Party. Lopez Obrador has refused to recognize Calderon's government and recently announced plans to run for the presidency again in 2012.

Calderon also said he was concerned about Venezuela's ties to Iran, and that the Iranian Embassy in Mexico is very politically active. Calderon added that Iran's influence is growing in the region thanks to Venezuela's help, the memo said.

Calderon also told Blair that there is a link among Iran, Venezuela, drug trafficking, and rule of law issues but the memo provides no details on that connection.

Calderon's office said Thursday afternoon it had just seen the cables and had no immediate comment.

Mexico and Venezuela have had strained relations in past years. Chavez accused former Mexican President Vicente Fox of kowtowing to the United States. Venezuela was angered when Calderon's campaign for the presidency in 2006 compared Lopez Obrador to Chavez, portraying him as a threat.

Calderon and Chavez will meet face to face Friday, when a two-day conference of Iberoamerican presidents will start in the Argentine city of Mar de Plata.