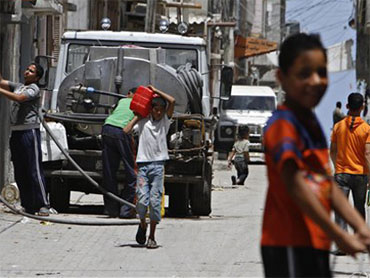 Most Western countries were unnerved by Hamas militants' takeover of Gaza in June, 2007, but none more so than Israel.

Israeli officials decided to respond by keeping "the Gazan economy functioning at the lowest level possible consistent with avoiding a humanitarian crisis," according to the latest diplomatic cable release from the Norwegian daily Aftenposten.

Three cables cited by the Aftenposten newspaper, showed that Israel kept the U.S. Embassy in Tel Aviv briefed on its internationally criticized blockade of the Gaza Strip, reports Reuters.

One cable, dated Nov. 3, 2008, states that "Israel has designated Gaza as a 'hostile entity,' and maintained an economic embargo against the territory. Under this designation, decisions on ... the territory's economy in general are treated ... as security matters."

After Hamas' takeover, Israel imposed a heavy embargo on Gaza intended to just barely avoid "pushing it over the edge."

Novak Djokovic out at Olympics, losing chance at "Golden Slam"

Since a deadly Israeli raid on a supply ship bound for Gaza in May, 2010, the Jewish state says it has significantly relaxed the blockade, with dozens of truckloads of goods entering the territory daily, Reuters reports. Aid organizations have said shipments should be increased further.

Palestinians say impoverished Gaza remains effectively a "prison" sealed off by Israel, and have called for an opening to allow normal trade and other links with the world, Reuters reports.