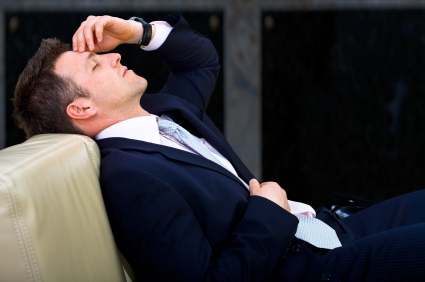 (MoneyWatch) COMMENTARY Let's face it: when that job or promotion you really want goes to someone else, that's when you're most receptive to feedback. But once you reach a certain rung on the corporate ladder, what's the point?

While those are indeed two extremes, they highlight the extraordinarily direct relationship between personal needs or wants and motivation or openness to change.

They also reveal a chronic and insidious problem in companies big and small. Once corporate executives or business leaders achieve a certain level of success, where's the incentive to tackle hard personal or professional issues they're not comfortable with?

When you're a hungry up-and-comer, on the other hand, you'll move mountains to get what you want.

The other day I got this email from a reader: "In a job search and was just told I didn't get the job I wanted because I wasn't assertive enough. How do I know if it's something I need to fix and then how do I fix it?"

Now, the company may have been looking for a specific type of individual. Who knows? But the reader is doing exactly what she should be doing: finding out what's stopping her from getting what she wants and doing something about it.

Even middle managers who have been around a while can be motivated to change. Sometimes getting the rug pulled out from under you can be a blessing in disguise.

An old friend of mine spent 20 years in the IT industry, maxing out at the director level. Deep inside, he wanted his VP stripes but he just wasn't aggressive enough. Then he got laid off. That was enough to motivate him. Even in a tough job market, he held out for the opportunity he deserved and now he's a VP, a top executive in an exciting startup.

Likewise, I often point out that Steve Jobs said getting fired from Apple was the best thing that ever could have happened to him. Clearly, that grounded the man and enabled him to reach new heights with Pixar and, ultimately, his return to Apple.

Now, contrast that with Leo Apotheker who was fired as CEO of SAP and then ousted fromHP after just 11 months on the job. When The Wall Street Journal asked whether a lack of self awareness about his shortcomings contributed to his ouster, Apotheker replied: "I'm not perfect, and who is?" Think he's in denial about his job performance? Me too.

There's an interesting irony to the SAP story. After ousting Apotheker, the company's new leaders determined that SAP had been too internally focused. According to co-CEO Bill McDermott, "Companies that are too internally focused are sick. There's nothing healthy about being obsessed with your own internal nonsense." After streamlining bureaucracy and killing off projects that "required people to think about our internal stuff," SAP managed a remarkably swift turnaround.

So, instead of confronting his own issues, Apotheker dragged SAP through the mud and nearly destroyed a great company. Then he turned around and made a mess of HP. Go figure.

10 signs you're in denial
Why everyone deserves a second chance
Want to move up? Find out what's stopping you

What conclusions can we draw from all of this?

First, those who have the greatest impact on corporate performance -- not to mention the livelihoods and investment portfolios of millions of employees and shareholders -- are the most resistant to feedback and change.

Which highlights how critical it is to hold executives accountable for corporate performance, good or bad, as opposed to the joke that substitutes for executive compensation, corporate governance, and board oversight in existence at most companies today. I believe Apotheker walked away from HP about $25 million richer.

That said, while a merit-based structure that depends on the relationship between accountability and success may not be perfect, it's way better than the alternative -- an entitlement-based structure where there's no personal responsibility whatsoever. Like it or not, there isn't much motivation to perform, improve or change when your needs and wants are already fulfilled.