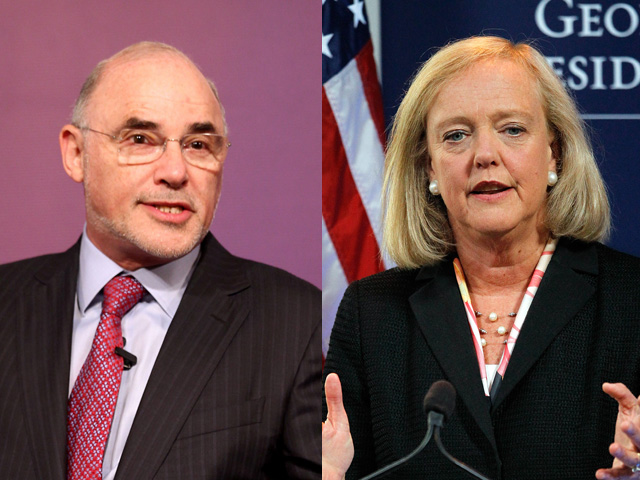 (MoneyWatch) Hewlett-Packard (HPQ) has been blaming one thing after another for its poor performance. It hired director Meg Whitman as a CEO replacement for fired Leo Apotheker, a main scapegoat originally hired to replace fired Mark Hurd who was hired to replace fired Carly Fiorina. Corporate politics can be so complicated.

Apotheker, in particular, was tagged as a ruinous influence responsible for things like wanting to break HP up into multiple parts. And now, ironically, the company's board is apparently studying whether to break up the company into parts, reports news outlet Quartz.

According to the report, a possible break-up is one option HP's board is considering as a way to "obtain maximum value for shareholders," which is generally corporate-speak for "our stock is in the dumps and we need investors to think we're worth owning again." Supposedly, if the company's fortunes can revive in the near term, the break-up will be put on ice.

HP alluded to the possible break-up in the company's annual report, filed with the SEC on December 27, 2012, citing it as a risk factor: "We also continue to evaluate the potential disposition of assets and businesses that may no longer help us meet our objectives."

A feeling of deja vu

Such declarations are not uncommon in the corporate world. But in this case it comes after HP's previous announcement that it would spin off the PC division -- a decision that was made by Apotheker and the board -- more than a year ago. The idea was to emulate IBM (IBM), which in the 1990s famously moved into services and software and then rid itself of its PC division, which was weighing down Big Blue's profits as the price of computers plunged.

Turns out Apotheker was right. But while margins have continued to drop on HP's PC business, partly because desktops and laptops became bargaining chips for salespeople who wanted ways to sweeten deals for servers and services, the company has yet to cut ties with the unit. Meanwhile, the server market has continued to be highly competitive, with Dell (which is about to go private in a bid to get strategic decisions out of the public eye) coming on strong and IBM still a powerhouse.

And that service business? HP had to write down much of what it paid for the former EDS, with the 2008 acquisition failing to spark growth in its own consulting business. And the attempt to get deeper into business of selling software to big companies ended badly with the acquisition of U.K. software vendor Autonomy -- an acquisition that Whitman would eventually say she was sorry she voted for, even though the company should have had all the resources necessary to do a reasonably valuation and fiscal analysis.

HP, which bought Autonomy for $10 billion in 2011, last year had to take an $8.8 billion charge on the company, with roughly $5 billion of that related to what HP says was improper accounting at the unit.

HP's board claimed to turn from a spin-off of a division because it was sure Whitman could pull things together into a common strategy to harness and leverage the company's resources ... or whatever "in" wording a corporate communications department might use. The real reason for the about-face was the scathing reaction of investors who could only see all those revenue dollars sail out the door and customers and business partners who didn't want to be left high and dry.

Now there's an about-about-face because reality has set in. There was no magical solution -- no apparently "rebirth" that Whitman and the board promised. And this after Whitman won bonuses and options worth $15.4 million even while the company missed its financial targets, according to Bloomberg.

The world has not changed that much in the last year, and HP has not done anything so extraordinary on the product, innovation or marketing front that it changed the rules of the game. The sad thing is that what seemed to be a desperate but necessary move then is likely still needed.