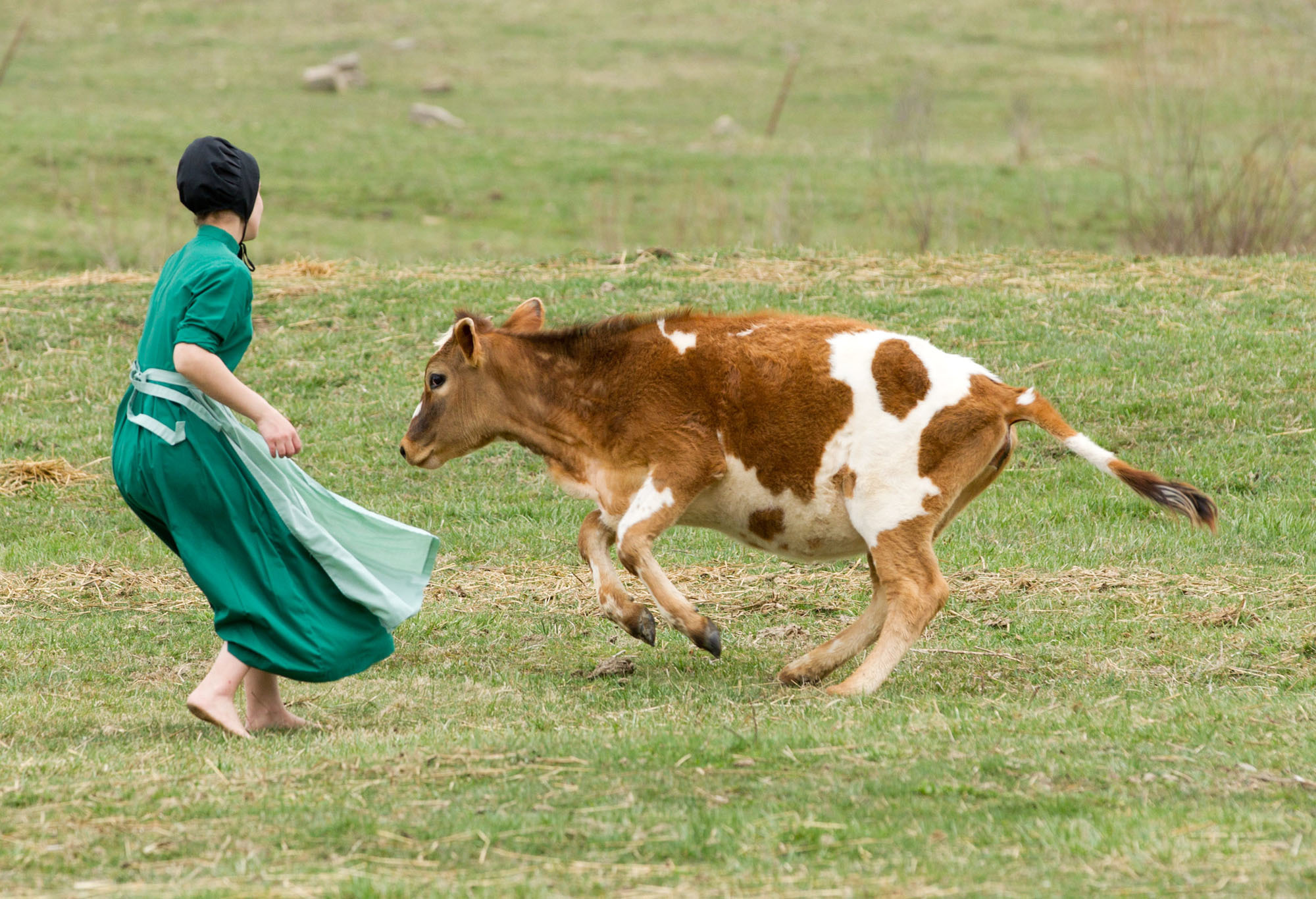 Forget Fluffy and Fido. Bessie the cow just might make a healthier pet.

That idea stems from new research in two farming-based religious communities that shun modern ways but have dramatically different childhood asthma rates. The goal was to find an explanation for why asthma is so uncommon among Amish communities, where children run barefoot in dairy barns and farm fields, but much higher in the other group.

Blood samples, house dust and mice experiments revealed some tantalizing clues, suggesting something in the dust was protecting the Amish children.

The study was published in Thursday's New England Journal of Medicine. It involved 60 school-aged children - 30 each from an Amish community in Middlebury, Indiana, and from a Hutterite colony near Mitchell, South Dakota. Amish and Hutterites both originated in Europe, share old-style Protestant beliefs and lifestyles and have similar genetic ancestry.

But Hutterites live on large highly industrialized communal farms, use modern agricultural machinery, and children are more isolated from livestock. By contrast, the Amish have family-run farms, they use horse-drawn plows, their barns often are located near their homes and their children have daily exposure to farm animals, the researchers explained.

Asthma is a lung disease involving narrowed airways and episodes of wheezing, coughing and breathing difficulties. Its cause is unknown but scientists believe genes and the environment play a role. Having a family history of allergy or asthma increases the risk, and pollution, dust and pet dander are among triggers in susceptible people.

No Amish children and six Hutterites had asthma. Other studies have found rates of about 5 percent in Amish school-aged children versus up to about 20 percent in Hutterites and 10 percent for U.S. kids. Reasons for the higher Hutterite rate aren't known but exhaust from farm machinery is an unlikely explanation because they typically don't come in close contact with it, said study co-author Carole Ober, a University of Chicago geneticist.

Other blood cells called monocytes were found in similar numbers in both groups. Previous studies suggest these cells are hyperactive in allergy-prone children but the cells showed signs of being less responsive to allergy triggers in the Amish kids, said co-author Anne Sperling, a University of Chicago immunologist.

"This was a phenomenal difference," she said. "We were blown away."

She said the second "gee-whiz moment" came after researchers collected Amish and Hutterite house dust and tested it on special mice sensitized to develop asthma symptoms. Hutterite dust triggered breathing troubles and inflamed airways in the mice; Amish dust did not.

What exactly is in Amish house dust that might protect children is not known and more research is planned to find out, but the study authors theorized it could be microbes including bacteria from dairy cows.

"We could just say put a cow in everyone's house and no one would have asthma anymore but of course that's not easy," Ober said with a chuckle.

But if protective germs can be identified, it might someday be possible to create an asthma blocker for all children, she said.

A journal editorial said the study bolsters evidence that exposure to germs from traditional farming may protect against asthma. The results also support the so-called "hygiene hypothesis," which theorizes that relatively germ-free homes of modern society make infants more vulnerable to allergies and asthma.

Dr. Talal Chatila, an allergy expert at Boston Children's Hospital who wrote the editorial, said the study doesn't answer when and how often exposure to farm dust might be needed to protect children and if it needs to begin before birth.

Ober noted that research has shown that infants whose families have dogs are less likely to develop asthma and allergies but that acquiring a dog later on doesn't make a difference.