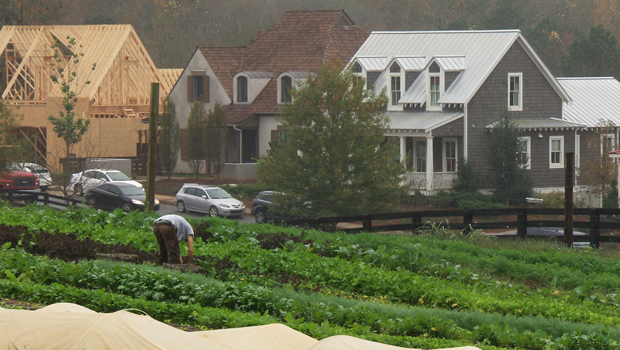 When it comes to feasting, more and more Americans these days are enjoying food that is "home grown" -- or at the very least, food that comes from the farm right next door. Mark Strassmann reports our Cover Story:

All you foodies, take a closer look: this tree-lined, suburban street might lead to heaven on Earth.

"I would say that probably 80% of the food that we eat comes from within a five-mile radius of this house," said Clay Johnson. "These peppers, yeah, come from 50 feet away!"

They bought here for the close-knit neighborhood -- and an organic farm right beyond their backyard.

"We had a friend from New York City come down here and ask us if it was decorative, the farm!" Johnson laughed. "He would say, like, 'Did they put those hay bales out there? Is that an art installation?'"

But this isn't the TV series "Green Acres," in which Oliver and Lisa Douglas were city folk trying their hand at farming. Johnson and Lemieux are technology consultants living in a development called Serenbe -- more than 200 homes, and growing.

The big draw here is not swim, tennis or golf, but a real working farm.

"To be clear, we're not roughing it," said Lemieux. "That farm is cared for by professional farmers. We buy the food. We were lucky to be so close to it, to be able to benefit. But we're not having to go out there and, you know, hoe the farm!"

Steve Nygren, Serenbe's developer, said, "People love the idea of sitting on their back porch and watching the farmers grow the food."

Nygren said the idea of putting a working farm in the subdivision's center came from having grown up on a farm. He comes from a long line of farmers from Colorado.

Nygren had opened and owned more than 30 restaurants when he bought 60 acres of farmland in 1994. And gradually, that family farm became Serenbe.

He was nervous about urban sprawl, and decided to develop a community his way. Today, Serenbe has 1,000 acres. Its clusters of homes are surrounded by walking trails and horse stables. But at the center of it all: 25 acres set aside for agriculture.

"The first 20 lots that I priced were sold in 48 hours," said Hygren. "And the next group [was] sold in about six weeks. So I realized that there was actually the market demand for what we were talking about."

As an approach, Serenbe grew from the same farm-to-table movement that has changed restaurant menus and brought farmers markets to more and more neighborhoods. This community planted itself at the forefront of the latest development trend: the "agrihood."

"It's really about using farms and agriculture as an amenity," said Ed McMahon, a researcher at the Urban Land Institute in Washington, D.C.

"When I first started following this, you could count the number of developments like this on both hands. Today there are literally hundreds of them, and I hear about a new one virtually every week. Putting a farm in the middle of development is relatively low-cost, and it's something that seems to resonate with lots of people. So I think we're gonna see a lot more of these kinds of projects going forward."

Agrihoods are popping up like peppers coast-to-coast. The Cannery, near Sacramento, has a 7.5-acre farm. Prairie Crossing outside Chicago is anchored by a 100-acre farm.

And just outside Washington, D.C., you'll find Willowsford, with its 300 acres set aside for fruits and vegetables, chickens and goats.

But agrihoods are often luxury living. The average home at Serenbe costs about $700,000 -- five times more than other homes in the area.

Serenbe recently broke ground on 200 new homes, and when complete, is expected to have 1,200 residents.

"People that are moving here, they want to be near the farm; they want to overlook it," said Ashley Rodgers, Serenbe's farm manager. "I know most of the folks in the community. And they can come up to me one day and say, 'Oh, man, I made that sweet potato last night,' and that warms my heart more than, like, anything!"

Rodgers grew up in suburban Detroit. She feels a special connection here: her hands in the soil, her heart in the community, where the vast majority of the people in Serenbe are eating things she has grown.

"I love what I do," she laughed. "I think about Charles, that lives right there, all the time. And just hearing him say, 'Hey, Ashley!' Like, knowing that he cares about what I'm doing and I can affect him. And he can come after school and pick radishes with us. And his parents can say, 'Oh, thank you, like, you make such an impact on him.'

Clay Johnson said the farm is vital. "I think it's the centerpiece of the community. We'll spend two to three hours at the farmer's market on Saturday, not just buying vegetables -- I mean that takes 15 minutes -- but checking in with neighbors, seeing how everybody's doing.

He added, "If you replace that farm with a golf course, we wouldn't live here."

Strassmann asked, "Can this model be duplicated, replicated in other places?"

"Gosh, I would hope so," said Rodgers. "I really would hope so, because the subdivision that I grew up in in Michigan, I hope that that's an end of an era, and we can have this community, not a subdivision."