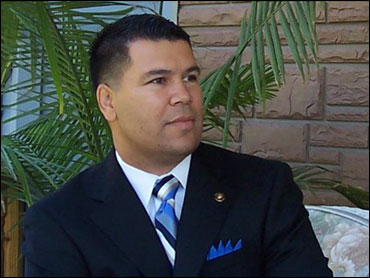 (James Hunt)
LUMBERTON, N.C. (CBS/AP) A North Carolina middle school principal who was shot in the face as he drove to school in April is using the Internet to seek information about who attacked him.

The Fayetteville Observer reports that Fairmont Middle School principal James Hunt hopes his new site will generate tips and lead to an arrest. Hunt was attacked April 9 by someone who drove beside his vehicle and fired a shotgun.

Hunt drove to a hospital and then spent several weeks in the Duke University Medical Center after reconstructive surgery for severe facial injuries. The former Marine and his family have been living in a Durham hotel under a fictitious name.

The Web site is http://whoshotprincipalhunt.com and began this month.