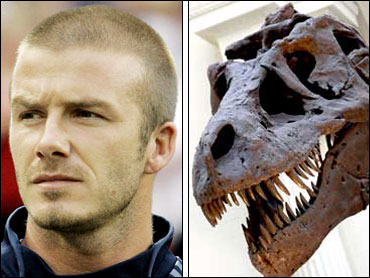 The Tyrannosaurus Rex would have been able to outrun soccer star David Beckham, according to research published Wednesday.

Previously experts argued the 18-foot-tall T-Rex's bulk would have meant it was a slow-moving scavenger, but new calculations reached using a supercomputer suggest the T-Rex could run up to 18 mph.

Scientists calculated the running speeds of five meat-eating dinosaurs that varied in size from a 6.6-pound Compsognathus to the 6.6-ton T-Rex. Their research was published Wednesday by The Royal Society scientific academy.

The fastest of the group was the Compsognathus, which could reach a top speed of 40 mph — 5 mph faster than the estimate for the fastest living animal on two legs, the ostrich.

The Velociraptor, a 44-pound killer whose speed was a focus in the film "Jurassic Park," could run 24 mph, according to the study.

"Our research involved feeding information about the skeletal and muscular structure of the dinosaurs directly into the supercomputer so it could work out how the animals were best able to move," said biomechanics expert Bill Sellers, one of the study's authors.

Previous calculations relied on information from living two-legged creatures to estimate how fast dinosaurs could run, said Sellers, who along with paleontologist Phil Manning, lead a team of scientists from the University of Manchester.

"Such calculations can accurately predict the top speed of a 6-ton chicken, but dinosaurs are not built like chickens and nor do they run like them," Sellers said.

The computer took up to a week to learn the biomechanics of each animal — starting with the first clumsy steps and developing into a top running speed based on optimum gait and posture, Sellers said.

The computer accurately predicted a 155-pound human with the muscle and bone structure of a professional athlete could reach a top running speed of 17.7 mph, just under the T-Rex's estimated top speed of 17.9 mph.

To further test the methodology, the computer also calculated that a 66-pound South American emu and a 143-pound ostrich could reach speeds near 30 mph and 35 mph, respectively.

Other dinosaurs studied included a 950-pound Dilophosaurus and a 1.5-ton Allosaurus, which the scientists clocked at 21 mph and 23.5 mph, respectively.