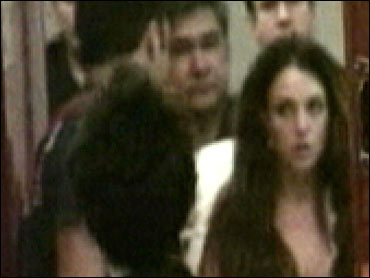 He's been seen squiring around a dazed looking Britney Spears, at times acting as her spokesman, referring to himself as her manager and friend, and insisting all the while that her best interest is his only concern.

All the same, Sam Lutfi, the 33-year-old man in the baseball cap who's been behind the scenes throughout Britney's public downfall, has not been easy to define.

Then on Tuesday, accusations in a restraining order cutting him off from the troubled pop star would seem to support at least one theory: that he was a Svengali figure in her life, a shady hanger-on who controlled everything - from doling out her pills to holding the paparazzi's leash.

The day before the court documents were released, Lutfi told The Associated Press in a text message: "I have no problems with anyone writing anything negative against me. My image is not of concern, hers is." Lutfi did not immediately respond to further inquiry."

The restraining order, based on a statement from Spears' mother Lynne, was not the first against Lutfi, who is listed in legal documents as Osama Lutfi. Accusations in at least three prior orders range from obscene messages following a business deal to a neighbor who said he was hounded incessantly and threatened with bodily harm.

Spears remained hospitalized Monday for psychiatric evaluation after being committed last week. The order, which bars Lutfi from contacting her in any way, was granted the same day a court turned control of her affairs over to her father and a lawyer.

Though Lutfi had recently reached out to various magazines and media personalities with information on Spears' condition and state of mind, details on him have proved elusive.

Public records show he was born August 16, 1974 in Los Angeles. Music magazine Blender, in a March cover story on Spears, states that Lutfi grew up in Woodland Hills, where his mother reportedly owns several gas stations.

According to the movie database IMDb.com, Lutfi served as associate producer of 1998 film "Circles" (also known as "Crossing Paths") and 2001's "Crossing Cords." And a profile titled "Sam Lutfi" on the networking Web site LinkedIn lists him as an "Independent Media Production Professional" with education from the University of Southern California. The school's alumni Web site does not list Lutfi as a past student.

How Lutfi connected with Spears in the first place isn't clear.

Brandy Navarre, co-owner of celebrity photo agency and Web site X17, told the AP that Lutfi contacted the agency about nine or 10 months ago - after her head-shaving incident and others - about telling Spears' side of the story.

Since then, X17 photographers have cultivated a close relationship with both Spears and Lutfi, whom they have photographed together numerous times. Lutfi communicates with X17 by text messages, instant messages and e-mail regularly, and has had long conversations with Navarre, she said.

Navarre said she never asked him how he and Spears met. Still, "I think I've always had a positive feeling of him," Navarre said. "He seems to have Britney's best interest in mind."

In the order against Lutfi, Lynne Spears says her daughter met him in October 2007, and that he "essentially moved into Britney's home and has purported to take control of her life, home and finances." She describes witnessing a situation of tight control and manipulation, with Lutfi calling the shots on her medications, cutting her phone lines, and deciding who's let in to see the pop star.

A court commissioner on Monday extended temporary conservatorship of Spears to her father, from whom she's been estranged, through Feb 14. Adam Streisand, an attorney who said he believed he had been authorized to represent Spears, argued Monday that James Spears should be removed because his role "is causing her more agitation and more distress."

"Her family hasn't been around," Navarre said. "(Lutfi) has kind of been filling that void. ... He's done everything from being a default manager and publicist to being a brother, a dad."

Navarre denied rumors that the agency was paying Lutfi for access.

"We have paid people for information, for pictures, but we've never paid Sam Lutfi and have never paid Britney Spears," Navarre said. "And he's never asked us for any money."

Last month, Barbara Walters said on ABC's "The View" that Lutfi had contacted her, telling her Spears "is suffering from what he describes as mental issues which are treatable." She also said Lutfi "seems to be enormously supportive" of Spears.

In October 2005, businesswoman Jumana Issa filed a complaint in Los Angeles against Lutfi; it was dismissed in March 2006 because she failed to appear for a preliminary hearing. When contacted by phone, Issa refused to comment.

In court papers, the Westside Escrow Corporation owner claimed Lutfi started harassing her from the day of closing an escrow account for him after he demanded canceling an escrow check which she said she was unable to stop payment on.

Issa said Lutfi antagonized her repeatedly with obscene e-mails, offensive faxes and late-night voice mails, hanging up on her around 15-20 times a day, according to court documents. Issa described the ordeal as "an overwhelming nightmare."

Lutfi allegedly wrote in one fax provided by Issa, "Come on big lady, I know you are capable of responding. Put down the donuts and call me."

In October 2004, a restraining order was issued demanding Lutfi stay at least 100 yards away from Mark Douglas Snoland, a neighbor in Lutfi's condominium building, for three years. Snoland's attorney Ronald Ziff referred questions to Snoland, who did not immediately return calls seeking comment.

According to Snoland's petition for a restraining order, Lutfi began "pounding" on Snoland's front door on the night of Sept. 6, 2004 and tried to kick the door in while also pounding on a kitchen window and "yelling verbal threats of bodily harm" against Snoland and his mother, who lived in the unit.

Snoland claimed Lutfi returned 15 minutes later to continue to kick the door and yell threats. Snoland also alleged Lutfi buzzed him on an intercom "non stop" and, hours later, called his home phone number and hung up every few minutes.

Lutfi claimed in a response to the petition that Snoland only "knocked" on the door, and that Snoland "was never threatened," but actually "angry he was removed from the board of the condo complex."

In April 2007, an Orange County Superior Court granted a restraining order against Lutfi for 29-year-old Danny Haines, who told Blender he had been a close friend of Lutfi for two years and that Lutfi once told him he should kill himself. Attempts by the AP to reach Haines for comment were unsuccessful.

According to Blender, Haines said he and Lutfi met on Myspace.com in 2005 when Haines was struggling with relationships with his relatives and friends. The two became tight pals, Haines told the magazine, and Lutfi emphasized that he could be a mediator between Haines and his family.

Haines claims Lutfi showed a jealous side, leaving voicemails calling Haines "worthless," and then divulging, "I love you, man. I love you to death." Haines alleges Lutfi later suggested Haines take sleeping pills, "lots of them," following a dispute over money Lutfi allegedly borrowed from Haines, according to the magazine.

Haines claims when he stopped communicating with Lutfi, Lutfi retaliated by e-mailing naked photographs of Haines to his family, friends, colleagues and employer, and text messaged and called repeatedly.