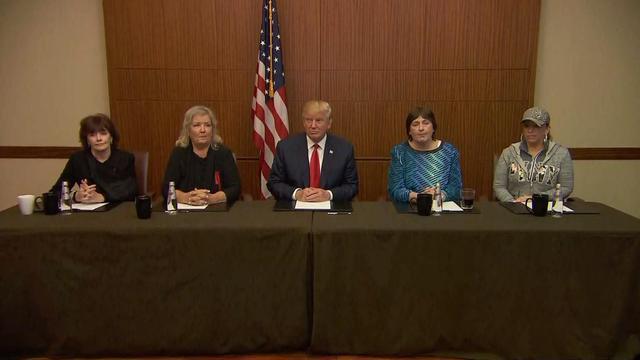 ST. LOUIS Just 90 minutes before the second presidential debate, Donald Trump went on Facebook Live with three women who have accused Bill Clinton of sexual misconduct and a woman whose accused rapist Hillary Clinton defended in 1975.

Trump has faced a Republican party implosion since a 2005 video from “Access Hollywood” of Trump saying he likes to “grab [women] by the p---.” The Clinton campaign has not been linked to the leaking of the video to The Washington Post, but she is expected to speak about it publicly for the first time at the debate on Sunday night.

The video featured Kathy Shelton, Juanita Broaddrick, Paula Jones and Kathleen Willey. Here are brief biographies of the women, and how they are linked to the Clintons.

Juanita Broaddrick, a 73-year-old retired nurse, alleges that Bill Clinton raped her in 1978, when he was the Attorney General of Arkansas. The allegations first swirled into the public’s eye in 1992, although she did not speak about them publicly. In a sworn affidavit in 1998 in the Paula Jones case, she said “allegations are untrue and I had hoped that they would no longer haunt me, or cause further disruption to my family.”

According to a BuzzFeed interview in August, Broaddrick said she decided to come forward when she was offered immunity by Kenneth Starr, the federal prosecutor investigating Clinton. But Starr found her claims to be inconclusive, and she said the Clintons did not try to influence her.  A Dateline interview with her ran two weeks after Clinton was acquitted, and no charges were ever brought against Clinton.

Since 1999, Broaddrick had stayed out of the public eye -- until this election. In January, she surfaced on Twitter, writing that she met Hillary Clinton at a fundraiser in 1992. She claims Hillary Clinton thanked her “everything you are doing in Bill’s campaign” and grabbed her by the arm and said “do you understand everything you do?” Trump this weekend retweeted her allegations against the Clintons.

The Clinton campaign has not addressed Broaddrick’s allegations.

Paula Jones, 50, is a former Arkansas state employee who claimed that she was sexually harassed by Bill Clinton in 1991, while he was governor. She filed a sexual harassment lawsuit in 1994, seeking $700,000 in damages. This lawsuit led the testimony by Broaddrick and, eventually, Monica Lewinsky, which led to Clinton’s 1999 impeachment.

Although Clinton and Jones tentatively reached a settlement in 1997, the deal fell apart when Jones insisted on an apology. In April 1998, a federal judge threw out the civil lawsuit, claiming that Clinton’s “boorish and offensive” behavior was not enough to constitute sexual harassment. That ruling was under appeal in November 1998 when Clinton, facing impeachment, settled with Jones for $850,000. In that settlement, Clinton admitted no wrongdoing and did not apologize.

Jones told “Inside Edition” on Monday that she is a “big Trump supporter.”

Kathleen Willey, 70, was a White House aide in 1993 when she accused Bill Clinton of making unwanted sexual advances on her. In a deposition for the Paula Jones case, Willey said she could not remember if Clinton kissed he and she said he did not fondle her. An independent prosecutor concluded “there is insufficient evidence to prove to a jury beyond a reasonable doubt that President Clinton’s testimony regarding Kathleen Willey was false.”

But in an 1998 interview with Mike Bradley on 60 Minutes, Willey said Clinton had tried to kiss her, touched her breasts and put her hand on his genitals when the two of them were alone. Clinton has always denied the allegations.

Willey has been actively tweeting against Hillary Clinton, writing earlier this week that “the Hag has called us bimbos, sluts, trailer trash, whores, skanks.”

Kathy Shelton alleges she was raped in 1975 by a man named Thomas Alfred Taylor in Arkansas. Hillary Clinton served as his defense attorney as he eventually pleaded guilty to one charge of “unlawful fondling of a child under 14.”

In her memoir “Living History,” Clinton wrote that she told the judge “I really didn’t feel comfortable taking on such a client, but [he] gently reminded me that I couldn’t very well refuse the judge’s request,” according to FactCheck.org. According to Clinton, he passed a polygraph test and an expert witness testified that there were doubt about the blood and the semen in the case.