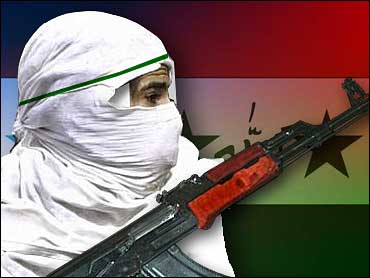 A shadowy guerrilla movement has inflicted growing casualties on U.S. forces occupying Iraq. The shooting began shortly after American troops captured Baghdad. The guerrilla attacks have increased in intensity and sophistication since then.

Thirty-nine U.S. troops have been killed by mines, ambushes and other hit-and-run attacks since President Bush declared major combat to be over on May 1.

The Pentagon and the Bush administration believe the guerillas to be composed chiefly of die-hard followers of Saddam Hussein and Islamic fundamentalists who have entered Iraq from other countries.

U.S. officials have so far taken heart from the fact that the guerrilla movement does not appear to have taken hold among Iraq's Shiite Muslims, who compose about 60 percent of the population.

Civilian administrator L. Paul Bremer, the de facto American ruler of Iraq, told CBS News' Face The Nation that the rebellion has been confined to a relatively small area of the nation. "Most of the country is quiet," he said.

The Saddam loyalists who are fighting the U.S. have one goal, said Deputy Defense Secretary Paul Wolfowitz: "Their aim is to restore the old regime."

This belief has led logically to another conclusion reached by many U.S. officials: Killing or capturing Saddam Hussein is the key to defeating the guerrilla movement.

"The sooner we can either kill him or capture him, the
better, because the fact that his fate is unknown certainly gives
his supporters the chance to go around and try to rally support for
him," said Bremer.

William Safire, a conservative columnist for the New York Times, put it more succinctly: "To end guerrilla war in Iraq, find Saddam Hussein and his ghostly crew. Those he terrorized must be assured the tyrant will never come back."

But there's another side to the story that adds uncertainty to the question of who the guerrillas are and what they want.

In an interview with CBS News, three men who claimed to be guerrillas said they're not doing it for love of Saddam -- but instead for God and their country.

The men all shook their heads "no" as a translator said, "They just follow the instruction of Holy Koran."

"So this is a religious war?" questioned Hawkins. "It's a holy war?"

The three claim to be the ones who attacked a military convoy last week west of Baghdad -- an attack that killed one American soldier. A Baghdad gun-runner arranged a meeting with them for CBS News.

"Why do you fight? Why do you attack American soldiers?" Hawkins asked.

"This is occupation, so we fight against the occupation," said a fighter.

"You're very upset the Americans are here," asked Hawkins, "but are you glad Saddam is gone?"

"We feel happy now because we can speak freely, but at the same time we don't want Saddam neither, or America. We just want the American soldiers to leave our country," reported the translator.

But since the men refused to disclose their identities or show their faces, there was no way of knowing with certainty whether they were indeed guerrillas, and if so, whether their views represented a majority opinion among the anti-U.S. fighters.

The answer to this question could well be critical to U.S. fortunes in Iraq. If the guerrillas aren't fighting for Saddam, his death or capture presumably won't have much of an impact on their operations.

But if the rebels are fighting for Saddam in a bid to bring him back to power, the dictator's death or capture could unravel the guerrilla movement, as many U.S. officials hope.