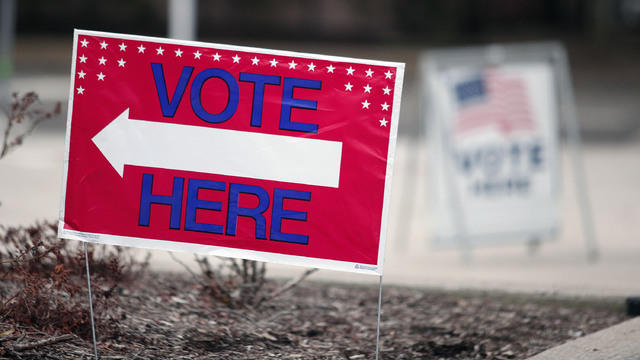 Here are the top trends and people to watch in politics this week:

Suburban voters and the Trump effect

This weekend President Trump traveled to the suburbs of Columbus, Ohio in an attempt to gin up the base to support Republican Troy Balderso, who's facing off against Democrat Danny O'Connor in Tuesday's special election to fill the last five months of retired Republican Rep. Pat Tiberi's term. Although Mr. Trump won this reliably conservative district by eleven points in 2016, the race is shaping up to be a tight one. A recent Monmouth University poll showed a bare one percent lead for Balderson over O'Connor, 44  to 43 percent.

A loss in Ohio's 12th District would be a bad omen for GOP efforts to hold onto control of the House this fall. Across the country, Republicans are fighting to hold onto seats in suburban, affluent, and educated districts such as this one.

Mr. Trump's rhetoric and presence on the campaign trail is a gift for the GOP base in the primaries, but it could backfire with women and more moderate voters who supported Barack Obama in 2008 and 2012 and Mr. Trump in 2016. As CNN's Jeff Zeleny pointed out on "Inside Politics" on Sunday, Trump made almost no mention of Obama during his rally in Ohio on Saturday.

Although Balderson has the president's full backing and has embraced him and his policies, just this past week, the Congressional Leadership Fund, backed by House Speaker Paul Ryan, R-Wisconsin, financed a TV commercial featuring vocal Trump critic Ohio Gov. John Kasich. In the ad, Kasich endorses Balderson in an effort to mobilize more moderate GOP voters.  On ABC's "This Week," Kasich weighed in on the special election, saying, "The chaos that seems to surround Donald Trump has unnerved a lot of people. So suburban women in particular here are the ones that are really turned off. And you add to that the, you know, millennials, you -- you have it very close. It's really kind of shocking because this should be just a slam dunk and it's not…It really doesn't bode well for the Republican party because this shouldn't even be contested."

Kasich also said that he asked Balderson why he invited Trump to come campaign for him -- and Balderson told him he had not. Kasich surmised, "So, you know, I think Donald Trump decides where he wants to go, and I think they think they're firing up the base."

Jeffrey Sadosky, a veteran GOP strategist who worked with Ohio elected officials for over a decade, tells CBS News that this is the challenge for Republican candidates in Ohio: They're "wedged between Trump and Kasich, needing one to earn credibility with the base and the other to provide some independent cover. The problem, however, is that highlighting the support of either of them makes it darn near impossible to hold on to the votes of the other's base, and that's not a recipe for winning an election."

To date, O'Connor has raised more money than Balderson this election cycle.The Congressional Leadership Fund has spent $2.6 million in the race and the NRCC and DCCC have both invested money as well, with the NRCC spending almost $600,000 so far.

O'Connor appears to be following the Conor Lamb model, bringing women and more moderate Obama voters back to the Democratic fold by focusing on the economy. He also frequently mentions that his fiancee is a Republican and appeals to moderate voters by touting expanding health care coverage, creating economic opportunity in Ohio, and finding common ground to end partisan gridlock.

Balderson has tried to tie O'Connor to Nancy Pelosi, but O'Connor has said that he would not back Pelosi if elected and called for new leadership and a "fresher perspective."

Meanwhile, Alexandria Ocasio-Cortez, who beat incumbent Joe Crowley in the Bronx last month in a surprise upset, is promoting a different strategy. She's urging the party to focus on mobilization and turning out younger, non-white voters who stayed home in 2016, rather than striving to win back moderates and independents who voted for Trump. She's narrowly tailoring the message to the economy.

In an appearance at Netroots Nation, the 28-year-old progressive called for the Democratic party to "rediscover our soul," adding "there is no district too red for us to flip." Ocasio-Cortez's preferred progressive candidates in two Kansas congressional primaries and a Michigan gubernatorial primary are on the ballot on Tuesday, and she and Vermont independent Sen. Bernie Sanders have recently hit the campaign trail for them.

In a July 22, 2018 appearance on CBS News' "Face the Nation," moderator Margaret Brennan asked why they would campaign for candidates in a solidly red GOP state like Kansas.  Sanders replied, "I happen to believe, passionately, that there really is not a blue-state, red-state tradition in this country. I think there's a lot of mythology attached to that."

CBS News rates Kansas' 3rd District -- which includes Kansas City and some of its surrounding suburbs -- as probably competitive this November. Incumbent Republican Kevin Yoder is seeking re-election in this district which Clinton won by one point in 2016 and which was occupied by a Democrat prior to Yoder's election in 2010. Yoder faces two primary challengers and has the endorsement of President Trump.

On the Democratic side, six Democrats are competing for their party's nomination, including progressive candidate Brent Welder who was elevated to the national stage when Sanders and Ocasio-Cortez campaigned for him in Kansas City.

Attorney Sharice Davids has won the endorsement of EMILY's List. Davids is a former MMA fighter, and if elected would be one of the first Native American women in Congress and the first openly gay representative from the state. Davids has worked as a lawyer on Native American reservations and was a White House fellow under Obama.

Rounding out the frontrunners in the Democratic primary is Tom Niermann, a teacher. Niermann has taught at a psychiatric hospital, juvenile detention center, in the Wichita public school system, and now in Prairie Village.

In Kansas' 4th District, Sanders and Ocasio-Cortez are backing progressive Army veteran James Thompson against Laura Lombard for the chance to take on incumbent Republican Rep. Ron Estes this November.

An upset by either El-Sayed or Welder would point to the growing influence of Ocasio-Cortez and the progressive movement on the national Democratic party. Moreover, progressive primary wins could continue to shape the messaging of 2020 Democratic presidential hopefuls, several who have already begun to move further to the left.

A record number of first-time candidates are running for Congress this year with a notable uptick, especially among women and military veterans seeking House and Senate seats.

On Tuesday night, John James is hoping to become the next veteran to advance to the general election in Michigan's Senate race. The black, 37-year-old former Army pilot graduated from West Point and served in Operation Iraqi Freedom before returning home to the Detroit area to run his family company. He is competing against businessman Sandy Pensler to win the Republican nomination and face off against incumbent Democratic Sen. Debbie Stabenow this fall. Mr. Trump endorsed James via tweet, calling James "spectacular" and "a candidate with such great potential."

Even if James clinches the nomination, Stabenow's seat is still widely considered to be safe this fall.

There other veterans are on the ticket on Tuesday night. Among them, Army veterans Steve Fitzgerald and Steve Watkins are two of seven Republicans vying for the nomination in Kansas' probably competitive second district, and veteran and former Congressman Kerry Bentivolio is one of five Republican candidates hoping to fill Michigan's very likely competitive 11th District, which is being vacated by Republican incumbent David Trott, who has been critical of the president.

Tuesday's primaries - what to know

There are four states holding primaries on Tuesday, August 7: Kansas, Michigan, Missouri, and Washington. There is also a special election in Ohio's 12th District, where Republican Rep. Pat Tiberi retired.

The Democrats need to flip 23 Republican-held districts to take control of the House of Representatives this fall, and CBS News rates five of the House districts holding primary elections on Tuesday as "very likely" or "probably" competitive in November (KS-2, KS-3, MI-8, MI-11, and WA-8).

Michigan, Missouri, and Washington each have one Senate primary election on Tuesday. In Michigan, incumbent Democratic Senator Debbie Stabenow is running for re-election. She will run in the general election against former West Point graduate and Iraq veteran John James or businessman Sandy Pensler.

In Missouri, incumbent Democratic Senator Claire McCaskill is expected to run against Republican State Attorney General Josh Hawley. McCaskill is one of 10 Democratic U.S. senators trying to defend their seats in states that Trump won in 2016.

In Washington, incumbent Democratic Senator Maria Cantwell is expected to easily win re-election in the fall.

There are gubernatorial primaries in Kansas and Michigan on Tuesday.

Kansas Secretary of State and Trump ally Kris Kobach is hoping to defeat incumbent Gov. Jeff Colyer in the Republican primary. As the New York Times' Jonathan Martin points out, Kobach "has become a national lightning rod for his views on immigration and voting rights," adding, "If Republicans select a candidate as polarizing as Mr. Kobach, it could have profound political implications for both local and national Democrats. Not only could they take back a Great Plains state governorship — winning veto power in the next round of redistricting— but they could also pick up a pair of House seats, making Kansas as pivotal to the battle for control of the House as more traditional, and more liberal, battleground states." Moderate State Senator Laura Kelly is the likely Democratic nominee for governor.

In Michigan, there are three Democratic primary candidates vying for their party's nomination -- Gretchen Whitmer, Abdul El-Sayed, and Shri Thanedar. Meanwhile, there are four Republican primary candidates but the two who have emerged as the frontrunners are Attorney General Bill Schuette and Lieutenant Governor Brian Calley. President Trump endorsed Schuette via tweet saying he will be a "fantastic" governor. Calley rescinded his endorsement of then candidate Trump during the 2016 presidential election after the Access Hollywood tape dropped.