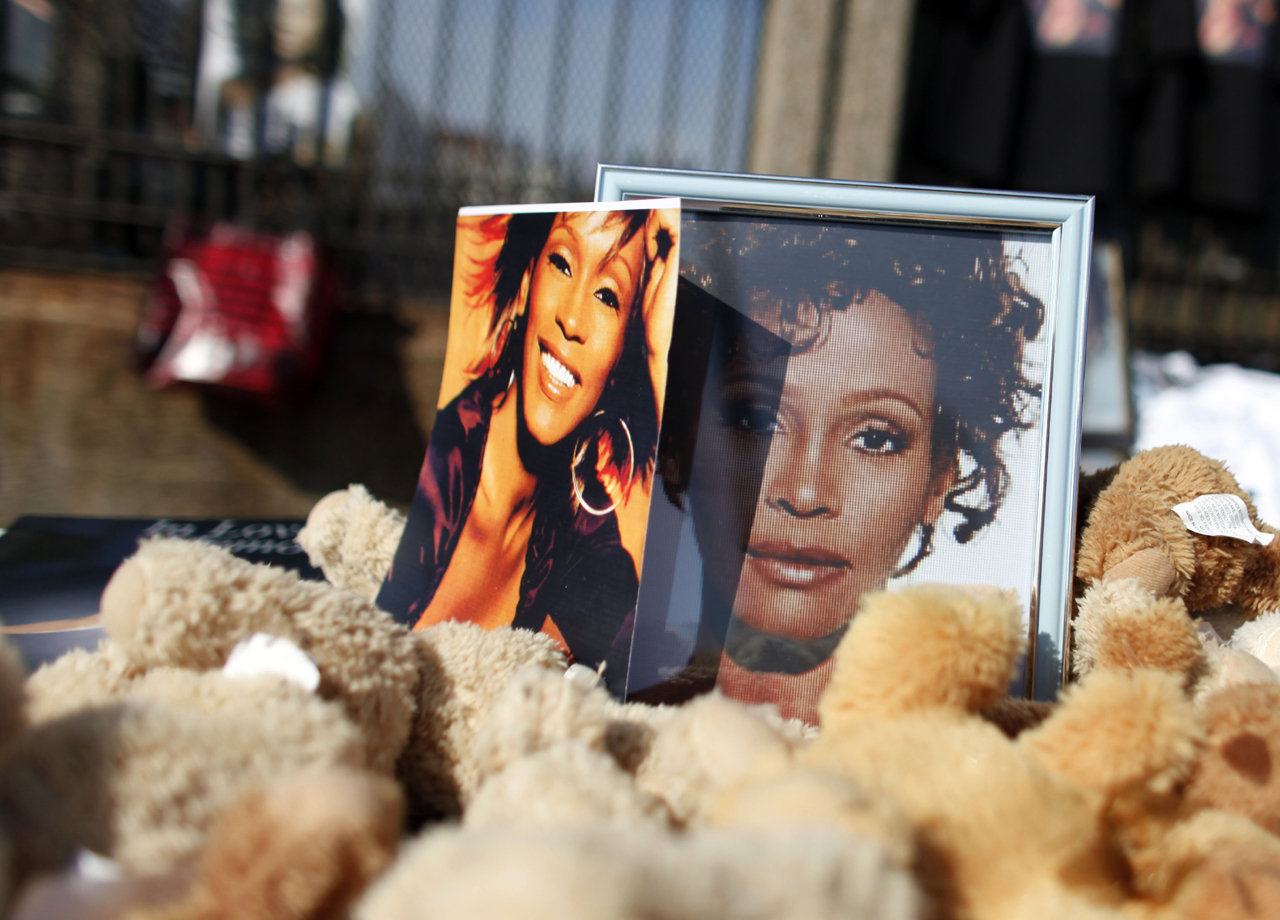 NEWARK, N.J. - After all the testimonials from relatives and friends, the songs from legends and pop stars, the preaching and even laughter, the raw emotion of Whitney Houston's funeral came down to just one moment: The sound of her own voice.

As the strains of her biggest record, "I Will Always Love You," filled the New Hope Baptist Church at the end of the nearly four-hour service Saturday and her silver-and-gold casket was lifted in the air, the weight of the moment was too much for her mother to bear.

Gospel singer Cissy Houston wailed, "My baby! My baby!" as she was held up by two women and led out of the church behind her daughter's body.

More in Whitney Houston: Death of a pop diva

A few steps behind her was the pop icon's daughter, Bobbi Kristina, also crying uncontrollably as she was comforted by Houston's close friend, singer Ray J.

It was the most searing scene on a day with mixed moods as family, friends and a list of celebrities — sometimes one and the same — came to the humble New Hope Baptist Church, where Whitney Houston first wowed a congregation, to remember one of music's legends, but also a New Jersey hometown girl.

Houston died the previous Saturday in Beverly Hills, Calif., on the eve of the Grammys at the age of 48.

She is to be buried Sunday next to her father, John Houston, in nearby Westfield, N.J.

Her death marked the end of a life of stunning achievement. Blessed with a voice of great power and beauty, Houston became one of pop music's most successful artists over a career that spanned nearly three decades and segued into film with hits like "The Bodyguard."

But her life was not without struggles. An addiction to drugs and a tumultuous union with ex-husband Bobby Brown saw her tumbling from grace.

"She was someone with a charmed and a beautiful life, sometimes misunderstood, even by herself," said her sister-in-law and manager, Patricia Houston. "But a life nevertheless that gave joy, happiness, enthusiasm, peace and beautiful music to millions of people around the world."

Kevin Costner, her co-star in "The Bodyguard," said that for all of Houston's beauty and success, she was still yearning for approval from the public and somewhat insecure, a superstar who "still wondered, 'Am I good enough? Am I pretty enough? Will they like me?'"

"It's a tree we could all hang from — the unexplainable burden that comes with fame," he said. "Call it doubt. Call it fear. I've had mine. And I know the famous in the room have had theirs."

Kevin Costner on the "miracle" that was Whitney

Many who spoke talked about Houston's unshakable faith in Jesus Christ. They said it got her through some of her most difficult times. Perry recalled a conversation where Houston would look sad when reflecting on her troubles, but then would hasten to add that God was taking care of her.

"The other thing I know for sure — and this is more important than anything that she's done in her life — Whitney Houston loved the Lord," he said.

Fittingly, music played a major role in the send-off to one of music's greatest voices.

Stevie Wonder rewrote lyrics to "Ribbon in the Sky" for Houston — "you will always be a ribbon in the sky," he sang.

So did gospel's the Rev. Kim Burrell for "A Change is Gonna Come," which Warwick said was Houston's favorite song of all time. R. Kelly brought the New Hope Baptist Church to its feet with a stirring version of "I Look to You," the title of Houston's final studio album.

And Keys, her voice breaking at times, dedicated her song "Send Me An Angel" to Houston

Brown briefly appeared at the funeral, walking to the casket, touching it and walking out. He later said in a statement that he and his children were asked repeatedly to move and he left rather than risk creating a scene.

Close family friend Aretha Franklin, whom Houston lovingly called "Aunt Ree," had been expected to sing at the service, but said early Saturday she was too ill to attend. Franklin said in an email to The Associated Press that she had been up most of the night with leg spasms and sent best wishes to the family.

Saturday night, Franklin performed at Radio City Music Hall and remembered Houston with a light gospel rendition of "I Will Always Love You."

Warwick presided over the funeral, introducing speakers and singers and offering short insights about her cousin; she joked that Houston's Super Bowl performance of "The Star Spangled Banner" became almost as big as the telephone book.

Hudson, who sang "I Will Always Love You" in a Grammy tribute the night after Houston's death, mourned Houston along with Monica, Brandy, and Jordin Sparks — representing a generation of big-voiced young singers who grew up emulating the star of the '80s and '90s. Sparks stars with Houston in the remake of the 1970s film "Sparkle," due out in August.

A program featuring a picture of Houston looking skyward read "Celebrating the life of Whitney Elizabeth Houston, a child of God." Pictures of Houston as a baby, with her mother and daughter filled the program.

"I never told you that when you were born, the Holy Spirit told me that you would not be with me long," Cissy Houston wrote her daughter in a letter published in the program. "And I thank God for the beautiful flower he allowed me to raise and cherish for 48 years."

"Rest, my baby girl in peace," the letter ends. It is signed "Mommie."

Over her career, Houston sold more than 50 million records in the United States alone. Her voice, an ideal blend of power, grace and beauty, made classics out of songs like "Saving All My Love For You," ''I Will Always Love You," ''The Greatest Love of All" and "I'm Every Woman." Her six Grammys were only a fraction of her many awards.

Houston had her first No. 1 hit by the time she was 22, followed by a flurry of No. 1 songs and multi-platinum records. Her last album, "I Look To You," debuted on the top of the charts when it was released in 2009 with strong sales, but didn't have the staying power of her previous records. A tour the next year was doomed by cancellations because of illness and sub-par performances.

On Saturday, fans were kept blocks from the church and the invitation-only funeral, but their presence was felt. A huge shrine of heart-shaped balloons and personal messages covered the street corner around the church entrance.

A few fans gathered hours before the service as close as they could get to the church, some from as far away as Washington, D.C., and Miami. Bobby Brooks said he came from Washington "just to be among the rest of the fans."

"Just to celebrate her life, not just her death," he said. "Just to sing and dance with the people that love her."