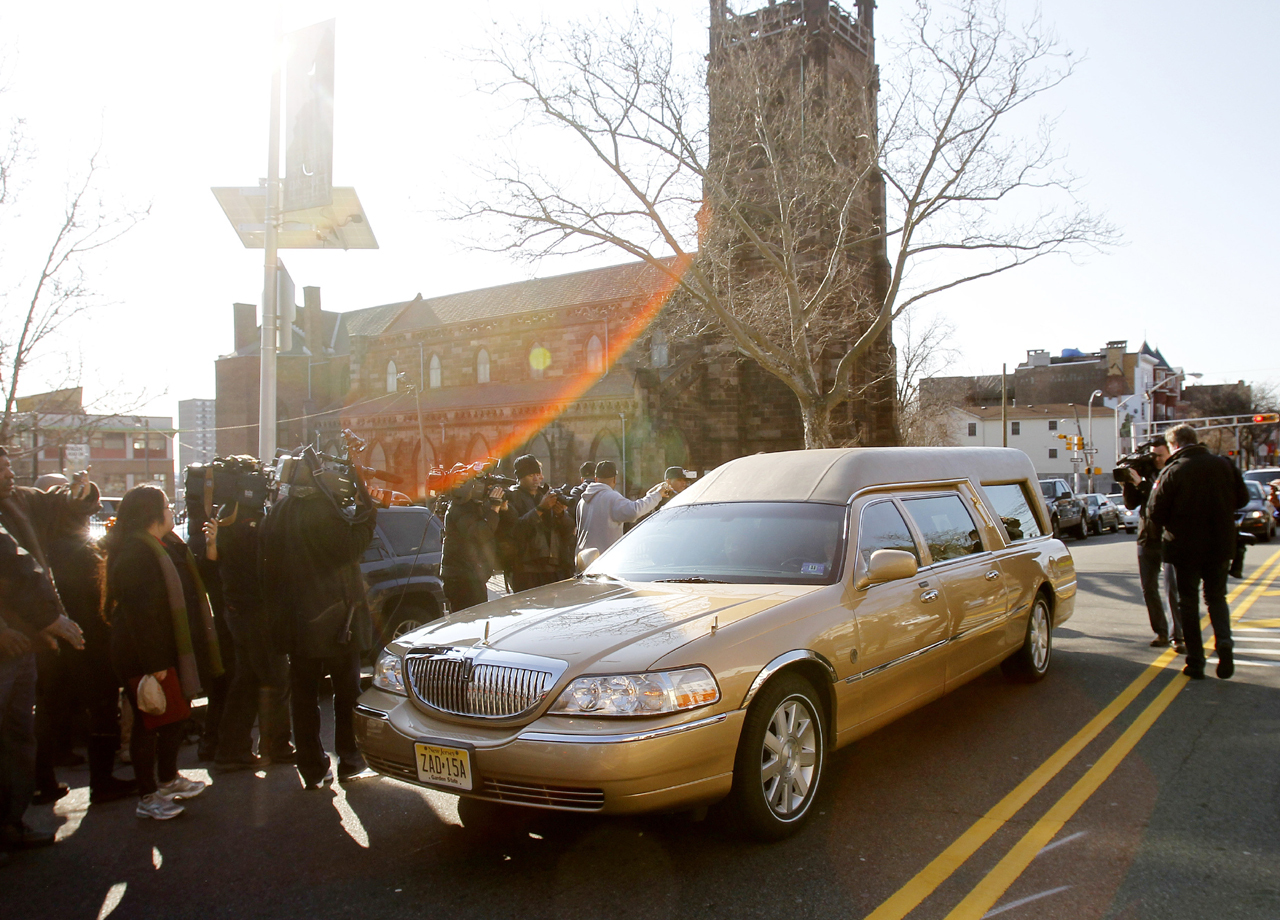 More than 1,500 packed  the New Hope Baptist Church for the nearly four- hour service  that celebrated  Houston's life  and career.

More in Whitney Houston: Death of a pop diva

Costner remembered his  co-star in "The Bodygiard" as  a movie star who was uncertain of her own fame, who "still wondered, 'am I good enough? Am I pretty enough? Will they like me?' "

"It was the burden that made her great and the part that caused her to stumble in the end," Costner said.

"We are here today, hearts broken but yet with God's strength we celebrate the life of Whitney Houston," Rev. Joe A. Carter told the packed church after the choir behind him sang "The Lord is My Shepherd." "Whitney, you are the only woman that could bring all of us together. Whitney, today is your day."

A gospel choir, members dressed in white and gold, opened the funeral with song, and churchgoers were swaying and clapping along. Some stood in the aisles in the full church. Others were more mournful; singer Ray J., who spent time with Houston during her last days, broke down crying. His sister, singer Brandy, put her arm around him.

Houston's mother, Cissy Houston and Houston's daughter, 18-year-old Bobbi Kristina, clutched each other in the front of the row.

At the beginning of the service, filmmaker Tyler Perry praised Houston's "grace that kept on carrying her all the way through, the same grace led her all the way to the top of the charts. She sang for presidents."

When Costner gave his remarks he made the crowd laugh at various points while remembering their friendship and working relationship.

He talked about what the pair had in common: Both had been raised in the Baptist church and both liked to sing. He said Houston, of course, was a much better singer.

"I thought she was the perfect choice," Costner said about casting Houston in "The Bodyguard," her first movie role.

"Whitney if you can hear me now, you weren't just good enough," he said about Houston despite her insecurities. "You were great."

Costner, his voice cracking, ended by saying, "When you sing before Him, don't worry, you'll be good enough."

Before her performance, Alicia Keys, wiping tears, called Houston a "beautiful human being," adding, "She's an angel to us. She's been an angel to us."

Houston's producer and longtime mentor Clive Davis then took the podium, saying, "She never took anything for granted ... She was always appreciative."

"Personally all I can say is that I loved her very much," Davis said, calling her "one of a kind." "You wait for a voice like that for a lifetime," he added.

Davis also acknowledged her public battles, adding, "But when I needed her, she was there."

The music mogul talked about meeting with Houston shortly before she died. During that encounter, Houston said, "I'm committed to getting in shape ... Clive, I'll be ready by August" [when the movie "Sparkle" hits theaters.]

Prior to his performance, Stevie Wonder told the crowd he wanted to praise God "for just allowing me to be alive the same time as Whitney."

Wonder then reworked his song, "Ribbon in the Sky," as a dedication for Houston, changing the lyrics from "a ribbon in the sky for our love" to "an angel from God's choir of love."

More music filled the church when R. Kelly, joined by a choir, sang "I Look to You." He was followed by gospel singer and good family friend CeCe Winans, who sang a soulful rendition of "Don't Cry for Me."

Gospel singer and pastor Marvin Winans spoke about faith and priority during his eulogy. He also commended New Jersey Gov. Chris Christie's choice to fly flags at half-staff on Saturday.

And a fitting ending to the nearly four-hour-long funeral: Houston's recording of "I Will Always Love You" played while guests left and Houston's casket was removed from the church. Her mother's sobs could be heard throughout the church, and Houston's daughter was crying, too.

Close family friend Aretha Franklin, whom Houston lovingly called "Aunt Ree," had been expected to sing at the service, but she was too ill to attend. Franklin said in an email to The Associated Press that she had been up most of the night with leg spasms and sent best wishes to the family; "May God bless and keep them all," she wrote.

Houston's mother was helped by two people on either side of her as she walked in and sat with her granddaughter and other family. Houston's ex-husband, Bobby Brown, briefly appeared at her funeral, walking to the casket, touching it and walking out.

A program featuring a picture of Houston looking skyward read "Celebrating the life of Whitney Elizabeth Houston, a child of God." Pictures of Houston as a baby, with her mother, gospel singer Cissy Houston, and daughter, Bobbi Kristina, filled the program.

"I never told you that when you were born, the Holy Spirit told me that you would not be with me long," Cissy Houston wrote her daughter in a letter published in the program. "And I thank God for the beautiful flower he allowed me to raise and cherish for 48 years."

A couple of hours before the funeral, the blockades parted to allow in the hearse carrying Houston's body in a silver casket, draped in black.

The service marks exactly one week after the 48-year-old Houston -- one of music's all-time biggest stars -- was found dead in a Beverly Hills hotel in California. A cause of death has yet to be determined.

Houston's death marked the final chapter for the superstar whose fall from grace, while shocking, was years in the making. Houston had her first No. 1 hit by the time she was 22, followed by a flurry of No. 1 songs and multi-platinum records.

Over her career, she sold more than 50 million records in the United States alone. Her voice, an ideal blend of power, grace and beauty, made classics out of songs like "Saving All My Love For You," "I Will Always Love You," "The Greatest Love of All" and "I'm Every Woman." Her six Grammys were only a fraction of her many awards.

But amid the fame, a turbulent marriage to Brown and her addiction to drugs tarnished her image. She became a woman falling apart in front of the world.

Her last album, "I Look To You," debuted on the top of the charts when it was released in 2009 with strong sales, but didn't have the staying power of her previous records. A tour the next year was doomed by cancellations because of illness and sub-par performances.

Still, a comeback was ahead: She was to star in the remake of the movie "Sparkle" and was working on new music. Her family, friends and hard-core fans were hopeful.

Houston will be buried next to her father, John Houston, in nearby Westfield, N.J.