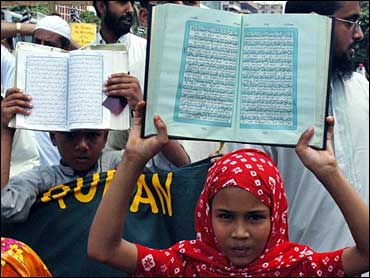 U.S. military officials say no guard at the Guantanamo Bay prison for terror suspects flushed a detainee's Quran down the toilet, but they disclosed that a Muslim holy book was splashed with urine. But Saturday, the White House downplayed the issue.

In other newly disclosed incidents, a detainee's Quran was deliberately kicked and another's was stepped on.

A day after the Pentagon confirmed a series of instances of U.S. personnel mishandling the Quran, the White House is downplaying the issue. The president's spokesman says it's "unfortunate" some people have chosen to take out of context "a few isolated incidents by a few individuals."

Friday night, the Pentagon confirmed several incidents of U.S. guards at Guantanamo Bay prison mistreating the Quran. They include a guard deliberately kicking the holy book as well as someone writing an obscenity in a Quran. A guard's urine also splashed on a prisoner's Quran.

Two weeks ago, the White House responded with a verbal offensive against the media after a now-retracted Newsweek article alleged U.S. interrogators at the detention center had flushed a Quran down a toilet.

White House officials note that the investigation also found 15 cases of detainees mishandling their own Qurans.

On March 25, a detainee complained to guards that "urine came through an air vent" and splashed on him and his Quran. A guard admitted he was at fault, but a report released Friday evening offering new details about Quran mishandling incidents did not make clear whether the guard intended the result.

In another confirmed incident, water balloons thrown by prison guards caused an unspecified number of Qurans to get wet, and in a confirmed but ambiguous case, a two-word obscenity was written in English on the inside cover of a Quran.

The findings, released after normal business hours Friday evening and after the major TV networks had aired their evening news programs, are among the results of an investigation last month by Brig. Gen. Jay Hood, the commander of the detention center in Cuba. A Newsweek magazine report — later retracted — that a U.S. soldier had flushed one Guantanamo Bay detainee's Quran down a toilet triggered the investigation.

The story stirred worldwide controversy, and the Bush administration blamed it for deadly demonstrations in Afghanistan.

Hood said in a written statement released with the new details that his investigation "revealed a consistent, documented policy of respectful handling of the Quran dating back almost 2½ years."

Captain Jeff Weir, deputy public information officer at Guantanamo Bay, told CBS News that the number of incidents in relations to the thousands and thousands of detainees who have come through the prison is minute.

Lawrence Di Rita, chief spokesman for Defense Secretary Donald H. Rumsfeld, did not address the confirmed incidents of mishandling the Muslim holy book. Reached while traveling with Rumsfeld in Asia, he said U.S. Southern Command policy calls for "serious, respectful and appropriate" handling of the Quran.

"The Hood inquiry would appear to affirm that policy," Di Rita said.

Hood said that of nine mishandling cases that were studied in detail by reviewing thousands of pages of written records, five were confirmed. He could not determine conclusively whether the other four took place.

In one of the unconfirmed cases, a detainee in April 2003 complained to FBI and other interrogators that guards "constantly defile the Quran." The detainee alleged that in one instance a female military guard threw a Quran into a bag of wet towels to anger another detainee, and he also alleged that another guard said the Quran belonged in the toilet and that guards were ordered to do these things.

Hood said he found no other record of this detainee mentioning any Quran mishandling. The detainee has since been released.

In the March incident, as described in the report, the guard had left his observation post to go outside to urinate. The wind blew his urine through an air vent into the cell block. The guard's supervisor reprimanded him and assigned him to gate guard duty, where he had no contact with detainees, for the rest of his assignment at Guantanamo Bay.

In another of the confirmed cases, a contract interrogator stepped on a detainee's Quran in July 2003 and then apologized. "The interrogator was later terminated for a pattern of unacceptable behavior, an inability to follow direct guidance and poor leadership," the Hood report said.

Hood also said his investigation found 15 cases of detainees mishandling their own Qurans. "These included using a Quran as a pillow, ripping pages out of the Quran, attempting to flush a Quran down the toilet and urinating on the Quran," Hood's report said. It offered no possible explanation for the detainees' motives.

In the most recent of those 15 cases, a detainee on Feb. 18 allegedly ripped up his Quran and handed it to a guard, stating that he had given up on being a Muslim. Several guards witnessed this, Hood reported.

Last week, Hood disclosed he had confirmed five cases of mishandling of the Quran, but he refused to provide details. Allegations of Quran desecration at Guantanamo Bay have led to anti-American passions in many Muslim nations, although Pentagon officials have insisted that the problems were relatively minor and that U.S. commanders have gone to great lengths to enable detainees to practice their religion in captivity.

Hood said last week he found no credible evidence that a Quran was ever flushed down a toilet. He said a prisoner who was reported to have complained to an FBI agent in 2002 that a military guard threw a Quran in the toilet has since told Hood's investigators that he never witnessed any form of Quran desecration.

Other prisoners who were returned to their home countries after serving time at Guantanamo Bay as terror suspects have alleged Quran desecration by U.S. guards, and some have said a Quran was placed in a toilet.

There are about 540 detainees at Guantanamo Bay. Some have been there more than three years without being charged with a crime. Most were captured on the battlefields of Afghanistan in 2001 and 2002 and were sent to Guantanamo Bay in hope of extracting useful intelligence about the al Qaeda terrorist network.