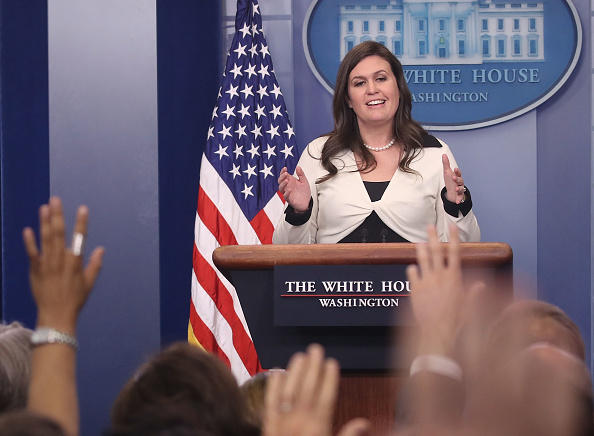 Sarah Huckabee Sanders is the new White House press secretary, replacing Sean Spicer after he resigned on Friday, it was announced in the first briefing since Spicer confirmed his departure earlier in the day.

"I take issue with that," Scaramucci said. "I think the ship is going in the right direction."

But Scaramucci's hiring was a factor in Spicer's resignation, as was Spicer's diminishing role in the White House, CBS News' Chief White House Correspondent Major Garrett reports. A source with direct knowledge of the situation said there was a Friday White House communications meeting in which the new communications director was announced, and Spicer made the decision to resign right before the meeting, when he learned Scaramucci had the job.

Spicer will remain on until August. He had taken more of a background presence at the White House lately, with Sanders taking over most of the White House press briefings.

Sanders, taking the podium for the first time since she was named press secretary, said she will do her best to be as "open, honest, and transparent with you all as humanly possible." She also said "morale is pretty high" at the White House, even as personnel shakeups and the Russia investigations continue to dog the White House.

Sanders: "Morale is pretty high" at the White House

3:15 p.m. Despite the internal shakeups, Sanders described the morale at the White House as "pretty high."

Sanders pledged to do her "very, very best" as press secretary, and to be as "open, honest and transparent with you all as humanly possible."

Sanders: The president's point is he doesn't want the special counsel to move outside its scope

"I think we've been extremely clear on that."

Scaramucci: The president is going to have a "phenomenal relationship" with the press

3 p.m. Scaramucci said he's an optimistic guy, but he thinks Mr. Trump will have a "phenomenal relationship" with the press.

Scaramucci declined to say whether he will commit to holding regular or daily on-camera briefings.

Scaramucci says he has a lot of respect for Steve Bannon

2:57 p.m. Steve Bannon, the president's chief strategist, reportedly had strong objections to Scaramucci's selection. But the new communications director said he plans to work well with Bannon, and has a lot of respect for him.

Scaramucci said his plan as communications director is to focus on his work and keep his ego low.

Scaramucci: "I love the president"

2:51 p.m. The new communications director emphasized in his first address to the press that he loves the president, and will do everything he can to serve him. Scaramucci said he will report directly to the president, but will also closely work with chief of staff Reince Priebus.

Scaramucci also said he has a "lot" of communications experience, from being on TV to shaping messages. Some are critical that his legal background is the best prepration to run communications in the White House.

Scaramucci: What we're going to do is a lot of winning

2:41 p.m. Scaramucci pushed back against claims that the president is under siege. The president, he said, is never someone under siege. Mr. Trump is a winner, and the White House is going to do a lot of winning, he said.

Scaramucci: This ship is headed in the right direction

2:33 p.m. The new communications director took issue with reporters' assertion that the White House communications shop is troubled. Scaramucci said the ship is headed in the "right direction."

Scaramucci said he was sad to see Spicer go, but that Spicer decided it was best to leave.

2:27 p.m. Scaramucci stepped up to the platform and announced that Sanders will replace Spicer as the new press secretary. The new communications director said he hopes Spicer continues on to do well and make lots of money.

Sanders has been handling the press briefings in recent weeks, making her selection somewhat natural.

2:24 p.m. Sanders kicked off the briefing with a joke. "Slow news day? Quiet crowd?" Nobody seemed to laugh.

Sanders launched into the president's actions during "Made in America" week, the theme the White House decided on for this week. But that theme has been entirely overshadowed by the health care debate, new developments in the Russia investigations, and now, Spicer's resignation.

Sanders did read a statement from the president on Spicer's resignation:

"I am grateful for Sean's work on behalf of my administration and the American people," the statement read. The president said he wished Spicer "great success," Sanders said.