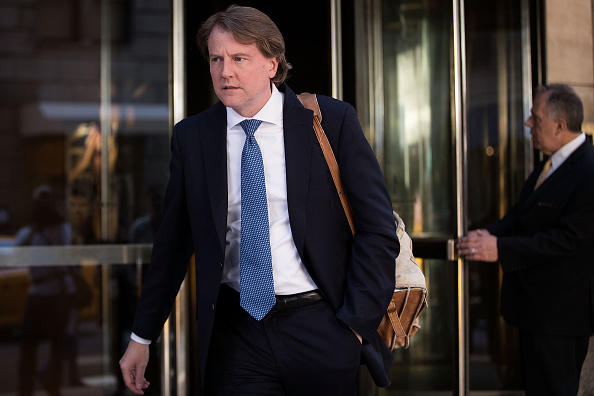 Although White House chief of staff John Kelly is bearing the brunt of the criticism over the White House's handling of former staff secretary Rob Porter, as new divisions and a sense of mistrust develop in the White House, there is another significant figure in the White House who knew more about the Porter situation, and knew earlier than most.

White House Counsel Don McGahn was in position to learn more and respond more forcefully about Porter and his ex-wives' abuse allegations, but there is scant evidence he did. Over a year ago, in January 2017, Porter warned McGahn that his ex-wives would likely say unflattering things about him to investigators in the course of his background check. There is little sign that the White House counsel felt this was a red flag. Instead, CBS News reported last week that McGahn assured Porter there was a process in place for the background check, and he should let the FBI process play out. In the meantime -- a period which extended to last week -- Porter would work under an interim security clearance.

FBI Director Christopher Wray told Congress Tuesday that part of Porter's background check had been completed by the FBI in March. It isn't yet clear whether McGahn saw it at that time. By late July, the FBI completed its background investigation and sent it to the White House, which requested more information. The FBI finished its follow-up in November and provided more information to the White House at that time.

CBS News also confirmed last week that in November, McGahn received a call from an ex-girlfriend of Porter informing him of the abuse allegations made by both of Porter's ex-wives, Jennifer Willoughby and Colbie Holderness. A source told CBS News that this was the first time McGahn was told of the nature of the allegations.

There are Kelly defenders in the West Wing who believe Kelly is unfairly taking the fall for McGahn, essentially shielding him from scrutiny as an act of loyalty to the West Wing and Mr. Trump, Major Garrett reports. But despite the fact that McGahn apparently had some knowledge earlier than anyone else in the White House that there might be damaging allegations about Porter, and that he was informed about developments on this front in November, if not earlier, there is no evidence to suggest that he's in any danger of losing his job.

CBS News has asked McGahn for comment but has not received a response yet.

McGahn has been one of the most important people in Donald Trump's orbit and remains so. He is central to the firing of FBI director James Comey and all Russia-related matters. He was also the campaign lawyer and was vital to the development of the Supreme Court list and the vetting of Mr. Trump's Supreme Court appointment of Neil Gorsuch.