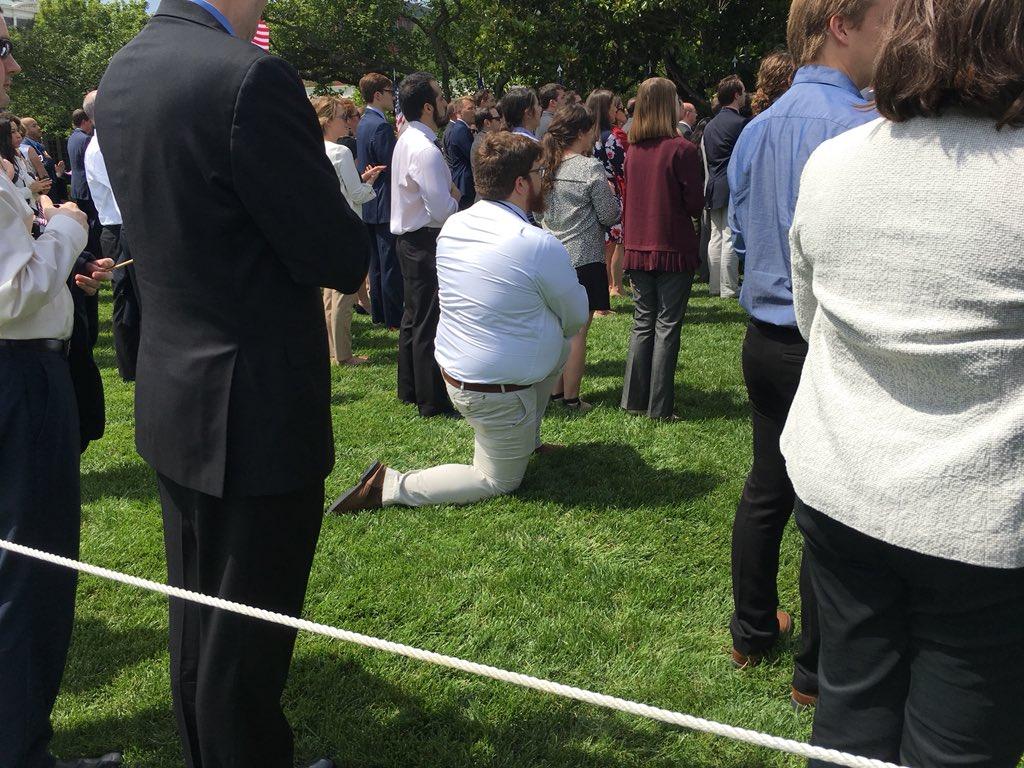 A spectator kneeled during the national anthem at the White House's "Celebration of America" event on Tuesday, which was being held after President Trump disinvited the Philadelphia Eagles from visiting. A photo of the man was captured on social media by Jesper Zølck, a reporter for TV 2 Denmark.

According to Zølck, the man didn't want to talk. He knelt on the White House lawn while the United States Marine Band played the "Star-Spangled Banner."

The White House pool report also noted that at the end of the anthem, a heckler -- a different man -- yelled, "Stop hiding behind the armed services and the national anthem!" Members of the crowd booed the heckler.

The day before the event, Mr. Trump disinvited the Eagles from their planned visit after it became clear that most members of the team were not going to attend. A source close to the players told CBS News that fewer than 10 players committed the attending the White House event. In rescinding the invitation, the president cited a disagreement over standing for the national anthem before games, although none of the Eagles' players took a knee during the 2017 season.

"Unfortunately, the Eagles offered to send only a tiny handful of representatives, while making clear that the great majority of players would not attend the event, despite planning to be in D.C. today," the White House said in a statement. "In other words, the vast majority of the Eagles team decided to abandon their fans."

Mr. Trump did not mention the Eagles once throughout the speech.

"We stand to show love for our fellow citizens and our magnificent Constitution. We stand to pay tribute to the incredible Americans who came before us and the heroic sacrifices they made," Mr. Trump said. "America is a great nation, a community, a family. And America's our home and we love our home, and our country has never done better than it's doing right now. Never!"

Philadelphia Mayor Jim Kenney said Mr. Trump's decision "only proves that our president is not a true patriot, but a fragile egomaniac."

Mr. Trump wrapped up his remarks by saying, "We proudly stand for our glorious nation under God." Then he cued the singing of "God Bless America."