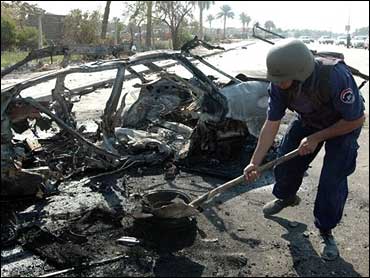 This story was written by CBS News correspondent Allen Pizzey, in Baghdad.


Someone once said that the job of president (or prime minister, or any other kind of national leader) should not be given to anyone who actually wants it. That being unrealistic, perhaps there ought to at least be a rule that says no one should be allowed to seek such employment unless they demonstrate a grasp of reality greater than the reach of their own ambitions.

Case in point, at least from the perspective of Baghdad, which is, after all, the epicenter of the issue that dominates the U.S. presidential "race", is Senator John McCain's recent analysis of the situation here.

According to transcripts of his appearance on CNN's "Late Edition", the senator confirmed that he had made the following statement: "There are neighborhoods in Baghdad where you and I could walk through those neighborhoods today."

He went on to add "General Petraeus goes out there almost every day in an unarmed Humvee." Apart from the fact that he probably meant "unarmored", the statement displays a woeful ignorance of the news from here.

Even those who buy the argument that the media "reports only bad things," can hardly deny that there is bad news. Surely that ought to count double for someone seeking a job that includes the description of commander-in-chief for a war he says may not be over by the time the position next becomes vacant.

For example, the Associated Press' first lead of the day today (March 29, 2007) began thus: "A bomb planted under a parked car tore through an outdoor market in a mixed Baghdad neighborhood Thursday, killing several people and wounding at least 20, police and hospital officials said."

In other news, two policemen were killed when they approached a car containing a corpse and it exploded. Gunmen targeted the head of the traffic police this morning. He escaped but two traffic policemen were killed. The bodies of 13 people were found across Baghdad. They had all been shot. The deputy governor of Kirkuk escaped a roadside bomb. A female engineer was kidnapped as she left her office in Diwaniya. Iraqi forces arrested 14 insurgents and found a cache of weapons in Hilla.

By an unofficial count, there have been seven major explosions in Baghdad so far today, at least some of them car bombs.

There was, however, some good news, at least in the context of Iraq. The U.S. military reported that only one of two truck bombs used in attacks on Iraqi and American forces in Falluja contained chlorine. And things could improve. It is only one p.m. local time as this is being written.

Senator McCain has visited Iraq in the past, and no doubt will again as the U.S. election campaign gains momentum. VIPs are generally flown to the Green Zone (a.k.a. the "International Zone"), which houses the American and other embassies as well as most of the Iraqi government. A notice to U.S. embassy employees today, issued shortly before the new ambassador, Ryan Crocker, was sworn in cited "the recent increase of indirect fire attacks in the embassy compound".

The Green Zone has been hit by mortars or rockets at least six times in the last seven days. One person has been killed and ten wounded. Embassy personnel reportedly have been instructed that body armor and helmets are now required for all "outdoor activities" within the four square-mile zone. That includes walking to the cafeteria.

If the Senator decides to hang out with the troops, he might take note of the signs and regulations that govern their conduct and provide a good indication as to how things are going here. Before leaving the sprawling U.S. base known as Camp Victory, which is adjacent to the Baghdad International Airport, there is a special place for weapons to be loaded, and anti-IED devices known as "Warlocks" switched on.

At every exit from the camps around the airport and the Green Zone there is a sign which reads: "All Weapons Red. Lock and Load."

No one in their right mind goes on the streets here without security, a situation succinctly summed up by retired General Barry McCaffrey in a document he compiled in his job as a West Point professor. The general, who until late last year was of the publicly-held opinion that things were improving, was quoted in the New York Times as saying that because the government here does not hold sway in any province, "no Iraqi government official, coalition soldier, diplomat, reporter, foreign NGO [nongovernmental organization], nor contractor can walk the streets of Baghdad, nor Mosul, nor Kirkuk, nor Basra, nor Tikrit, nor Najaf, nor Ramadi, without heavily armed protection."

When Iraqi Prime Minister Nouri al-Maliki went to Fallujah earlier this month to talk to tribal sheikhs who are now willing to take American money and arms to fight the insurgents, the honour guard of Iraqi troops on hand to meet his helicopter did not have magazines in their AK47s. All weapons had been cleared and ammunition taken away before he arrived. The only lethal weapons were in the hands of al-Maliki's personal security detail, which includes Western contractors.

For Senator McCain to claim there are places here where all is well is to woefully minimize the dangers faced by the troops he otherwise so admirably supports. A patrol of military police on their way to one of the about-to-be-established Joint Security Stations last week provides another case in point.

Leave aside the fact that the soldiers run a gauntlet of IEDs every day just to get there, and the convoy had to stop, gunners nervously scanning the surrounding houses and crossroads, until someone decided that a piece of debris in the road did not hide an IED. It was merely part of the seat of Humvee that had been blown up the day before, killing four soldiers. Once inside the walls of the fortified police station of their students and supposed allies, no American soldier took off a single piece of protective gear. American sentries backed up the Iraqis on the gate and roof. Humvee drivers stayed with their vehicles.

A young sergeant was assigned to accompany myself and cameraman Mark LaGanga wherever we went. When I suggested that it was fine and the sergeant could take a break, he replied quietly; "No sir. I need to be with you. Wouldn't want to take the risk of you being kidnapped."

Any time Senator McCain wants to walk the streets of Baghdad, unarmed and without a serious security detail, we'd be glad to lend him a camera so he can record his experience.